If Memory Serves me Wrong. 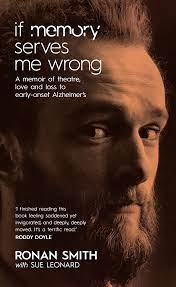 When Ronan Smith was a young actor, his father, the theatre impresario Brendan Smith contracted early onset Alzheimer’s disease, but steadfastly refused to acknowledge it. It fell to Ronan to protect his father, and ultimately, to have him committed. When, in 2014, Ronan was diagnosed with the same illness, he knew what the future held. But unlike his father, Ronan faced the future with positivity.

The former producer on RIverdance continued his work at The Gaiety Pantomime, but he changed his diet radically, increased his exercise, and became an active advocate for the Alzheimer’s Society of Ireland.

Written in real time, If Memory Serves me Wrong is a rare first hand account of the experience of being both a family carer, and of living with dementia.

‘Ronan is helping to change the culture around dementia.’

‘As a former colleague, Ronan’s story of Alzheimer’s in heartbreaking, but our shared love of the theatre life shines through this extraordinary memoir.’

‘What’s most striking ultimately is that this book, and Ronan’s story, is about love.’

‘Gentle, humorous, realistic and wise, deeply moving and inspiring in mapping out a radical vision of taking control of one’s own present and future.