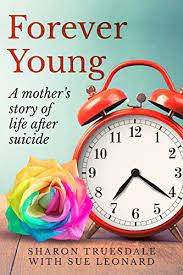 A Mother’s Story of Life after suicide.

When seventeen year old Matthew Truesdale took his own life, his devastated mother, Sharon, had to find a new way to live. The grieving process was unexpectedly hard and there were times she feared she was losing her mind. It wasn’t until she learned to give herself love, that life became bearable again.

Through recounting this, and celebrating her son’s short life, Sharon hopes to give hope to everyone who has been affected by suicide.

‘I would highly recommend this book for anyone who has lost a loved one to suicide. Having lost my son just 14 months ago, so much in this book I could relate to. I feel the best of advice comes from the ones who have walked the path.’

‘A true look inside the head and emotions of a mother devastated by finding her sons lifeless body and her struggle to accept HIS choice and learn to live again. Thank you for sharing and helping others understand the mindset of a grieving mother.’

‘I read this book in one sitting. It takes the form of a story. I liked that the book was written in an accessible manner. Sharon’s personal message in the last chapter brings the reader closer to her experience of the tragedy but ultimately speaks of hope for life after loss. A really useful read for someone who’s come through similar circumstances.’