Posted by Sue Leonard on Thursday 25th May 2017 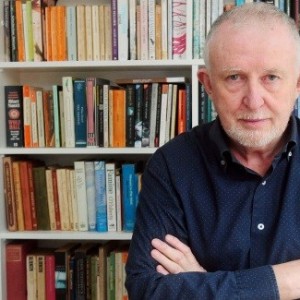 WILLIAM WALL is no stranger to literary prizes. He’s won many, including the Patrick Kavanagh Poetry Award, the Virginia Faulkner Award and the Seán Ó Faoláin Prize. But winning the Drue Heinz Literature Prize in America for his latest collection of stories has been a particular pleasure for the 61-year-old writer from Cork.

“My first novel, Alice Falling, was published in America,” William tells me, on the phone from his son’s house in Oxford. “The publishers liked my second, but felt it would be difficult to market. They asked, could I change the ending, and of course I couldn’t — not without changing the beginning and the middle too. After that, none of my books were published in America. I see this as a new opening.” Wall’s last novel, This Is The Country, was long-listed for the Man Booker Prize back in 2005.

“It was the year John Banville won with The Sea.” Although that was, obviously, a huge honour, Wall says that it had some negative repercussions.

“All my books are very different from each other. But a journalist, interviewing me, said: ‘Your readers will now expect you to write the same kind of book again.’ … I didn’t want to and it made life difficult for a number of years.

“I tried to pick up on the central character, but it didn’t work, and try as I might, I couldn’t write the same book again. The next book is this present one, and it’s very different again.”

The Islands, a stunning work of art, is set on three islands.

“I started with the line, there were three islands, and there was this voice in my head. I knew it was a woman, and that she was looking back. The narrative just took off from there.”

The first is based on Castle Island, one of three now uninhabited islands off Schull. The next was the Isle of Wight.

“An aunt — almost a second mother to me — lived there, in Bembridge. I used to go and spend holidays with her.

“The third is Procida, a tiny island in the bay of Naples where I have spent a lot of time. It’s the most populous rural area in the world. I’ve often thought that if you climbed on a roof at the port, you could walk to the other side of the island, without having to leave rooftops.”

A sumptuous linked collection of stories, The Islands recounts the lives of a family who spend large parts of the year on an island as an experiment. But their father, who instigated the project, leaves his wife and three daughters there for long periods, then catalogues their lives in his writing.

This theme, of a writer stealing someone else’s story, is one that has preoccupied Wall for some time. He used it, to great effect, in his third novel, The Map of Tenderness. The narrator’s mother, furious of her depiction in her son’s debut novel, becomes alienated from him.

“I’m an atheist. I don’t believe in ghosts, but when I was writing The Map of Tenderness I could feel my parent’s presence hovering over the book. It was very strange.

“I had a long conversation with a friend, just recently, who told me a story which I really want to write. I asked her if she was going to use it, because you can’t go appropriating the story of another writer; not when they already have a voice.” And that is the aspect of the conundrum that Wall concentrates on in The Islands. The emotionally charged novel is narrated in the alternating first person voices of Grace and Jeannie. And Grace, a fledgling writer, isn’t at all happy with her father’s version of events.

Utterly different, the two sisters keep separate secrets, and see their lives in disparate ways. The third sister, who is not given a voice, shows us yet another side to their pseudo-idyllic lives.

“The stories are primarily focused on Grace and Jeannie, and how they cope so differently with their absent father. Grace has suffered very badly, but at the end of the day she comes to terms with it.”

Wall has captured the female voice to perfection, and has those awkward hormonal emotions of a teenage girl down to a tee. That can’t have come easily?

“While we share common humanity, there are things that are unknowable. So, at its best, it’s what a man thinks a woman’s voice will be. But Liz, my wife, is an excellent reader and editor. I rely on her to put me right where I’ve gone wrong.

“My first novel centred on a woman too. In Alice Falling it was a distancing technique — which I used because I dislike the confessional voice in novels.”

Also a prize winning poet, Wall loves experimenting with form. There have been various versions of the stories that appear in The Islands, and a novel based on the collection is due for publication, with New Island, next year.

When I last interviewed William, back in 2005, he was worried that he would never write a novel again. Having contracted Still’s disease — a form of rheumatoid arthritis as a teenager, he was finding it increasingly difficult to type.

He has since retired from teaching, early, on health grounds, and he writes full time.

“Since then, they have developed new treatments, and things are much better,” he says, though mobility, along with pain control remains a problem. “I’m really hoping the Government legalise cannabis, because I think that would be an answer for treating both the pain and the inflammation.” Meanwhile, he remains utterly disciplined.

“As a prose writer you need to be. Material doesn’t always come as a light-bulb. It often comes through working the same sentences over and over until suddenly you can see a way to move forward with the story. But you have to be at the desk so that it can present itself.”

Interestingly, Wall doesn’t make a distinction between academic writing and fiction; he is fiercely proud of his two sons; the elder, a political philosopher who teaches law is currently writing a book, and the younger, a research curator, writes constantly for work.

“Academic writing can certainly be creative,” he says.

“Being married to a mathematician, I recognise mathematics as a creative science. When my wife talks about working on a maths problem, and the moment when she makes a breakthrough on it, it’s exactly the same feeling I get when I see the opening in a piece of prose to go forward.”

The breakthrough with The Islands, came when a tragic event occured. But that also caused the author difficulties.

“It centred everything, but posed the problem, where do you go after an event like that? That was when I realised the father was a huge figure in the story.”

There are other books in the pipeline. There’s a poetry collection due out in September; there’s the novel version of The Islands, Grace’s Day due next year, there’s a completed novel, currently being considered by publishers, and there’s a novella that’s still in the writing process.

“I see myself continuing to write fiction for quite a while,” he says.

The University of Pittsburgh Press will publish The Islands later this year.