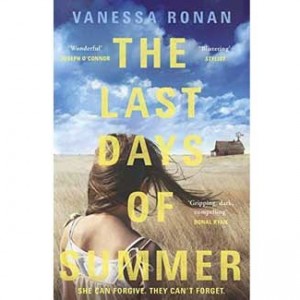 When Vanessa Ronan rang her father to tell him that Penguin were publishing her first novel, he was on the golf course in Texas, and didn’t want to be interrupted. And when Vanessa blurted out her news, there was a long silence at the end of the line.

“Unfortunately he never finished it,” she says. “So yes, he is a little jealous. But he is very proud now. He’s coming over for the launch and to be part of the buzz.”

A Literature Professor, he has every reason to be proud. The Last Days of Summer is an extraordinarily accomplished debut. Described as Literary Fiction meet Crime Thriller, it’s set in a small town in Texas, and starts when Jasper Curtis returns home after ten years in gaol, for a horrific offence.

Welcoming him in, his sister Lizzie is wary of the brother she once adored. How will his presence affect her daughters, Katie and Joanne? He swears he is done with trouble, but the townspeople can’t forget or forgive what he did. Full of dark tension, the action is driven by the characters. It makes for compelling reading.

An American married to an Irishman, Vanessa is luminescent. Casually dressed in ripped jeans and a top, with bright eyes and a clear skin, she laughs readily. She seems altogether too wholesome to be writing about a violent psychopath.

“I’ve always had a morbid fascination with serial killers,” she says. “I suppose it’s because it is something I don’t fully understand. When I was creating this book and realised I had a character like that, I, obviously, researched into it further. I wanted to show how Jasper went from a fairly nice child to what he became later; a man who could harm.”

The idea came to her when she and her brother, listening to a radio news report, heard of a man from a small town who, having committed a horrible crime and shown no remorse, was going back to the town.

“We looked at each other and he said, ‘Wow! That is fascinating. Wouldn’t it be an interesting place to start a short story or a play.’”

A few months later, taking a Masters in Creative Writing in Edinburgh, having to come up with lots of ideas for short stories, Vanessa remembered that news piece and used it for a weekly assignment.

“When I went back after the Christmas break the Professors pulled me aside and said, ‘This is really interesting. You might think of expanding it and turning it into a novella or novel.’ It turned into my thesis – which I got a distinction for – and it grew from there.

“I had imagined it would be a short taut novel, but the more I got into the character’s minds, the more I realised I had to stay with them and develop them. They became very real to me.”

They are all, wonderfully described from eleven year old Joanne – doe eyes to Jasper – to Jasper himself. For all his faults, there is a part of him, one can’t help liking.

“I’m happy to hear that,” says Vanessa. “One of my professors said early on that if Jasper is all monster, nobody is going to want to read the story. I took a note of that in my mind. I have a soft spot in my heart for him, even though he is a dark horrible person.”

Vanessa has written since she was a child. Both her parents were literary professors, and she and her brother were home schooled.

“Writing was like a game for us. We would edit each other’s work. From a very young age we were writing poems and stories and would swap them and ask each other’s opinion.”

At 16, Vanessa was ready to go to college. She was accepted into a very prestigious dance college in New York, and she loved it.

“We had academic classed, but all morning was dedicated to dance and in the evenings we had rehearsals. So we ended up being at school from 8.00am until 10.00 at night. I made some great friends.”

Graduating at 20, she got the first job she applied for – working as PA to a multi-millionaire.

“I was at the bottom of the PA pack. I would pick up his dry cleaning, and occasionally the chauffeur would take me into town to pick up whatever rare type of soap he wanted. It was very Devil wears Prada in a way, but I made good money and was able to save.”

Leaving that job, Vanessa backpacked through nineteen different countries – starting with Germany, Denmark, Scandinavia, and to the Arctic Circle where she saw the Northern Lights. Then down the Baltic Coast, through Eastern Europe, and then she headed to Ireland.

“I didn’t feel ready to go home, so I worked in a pub in Temple Bar. After a year I applied for the Masters in Edinburgh, planning never to return to Ireland. But two weeks before I left, I met the man who is now my husband.

“We met in ‘Pygmalion,’ and just hit it off. When you meet that person who is the right person it feels different to everyone else. We couldn’t handle the thought, after two weeks together, that we weren’t going to see each other so we decided to make a long-distance relationship work.”

Ryanair helped. Thanks to their €9.99 tickets, booked in advance the couple spent every weekend together.

“The longest we went without seeing each other was two weeks, and that felt terrible!”

Finishing her MA, Vanessa moved back to Dublin, and the couple have been married for four years. The book took some years to complete, but that was because of interruptions, like the wedding, and Vanessa’s other job, helping her sister-in-law with her dance school in North Dublin.

But it was through that teaching, that she got her deal.

“We taught Cecelia Ahern’s daughter Robin. My mother in law, who helps with registration, was chatting to Cecelia after class, and she mentioned I was writing a book. Cecelia gave me her email, and said she would love to see it when it was finished.

“A couple of months later, I emailed it to her, and another two months later, she pulled me aside and said, “I read the first forty pages – would you mind if I sent the novel to my agent? I think she would be interested.’ I said, ‘Would I mind? I’ve been praying for this.’”

Two weeks later, the super agent Marianne Gunn O’Connor said she wanted to represent Vanessa, and within two months of signing with her, Vanessa had her deal. And she’s now getting to grips with a new case of characters as she pens her second novel.

She’s thrilled with her debut; when I hand it to her and ask how it feels, she says, “Can I hug it?” Before meeting me, she went into Easons, and took a picture of her book on the shelf. But what of the writing process. Was that a joyous experience, of was living in such a dark mind troubling?

“It was a joy,” she says. “All the time I was busy with other things it was simmering and cooking in my mind. Starting the second book has been very strange – being in other character’s minds. I hadn’t realised how accustomed I had become to Jasper, Lizzie, Katie and Joanne.”