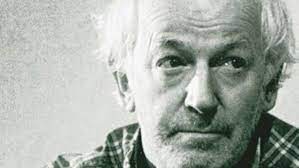 I was so sad to hear of the death of the actor Tom Hickey, on May 1st. I have such fond memories of interviewing him for the Irish Examiner back in 2002. Here is the piece I wrote back then.

Tom Hickey looks every inch the actor, as he bursts through the doors of the Shelbourne Hotel.  Dressed casually in black, his white hair frames his black baseball cap, and half moon glasses sit perched at the end of his nose.  And although his presence fills the room, as he talks enthusiastically about his long career in theatre, employing brilliant mimicry, Tom comes across as a charming, modest man, who is happy to laugh at himself.

At the moment, Tom says he’s just an office boy.   Busy preparing for a new tour of Tom Macintyre’s one man play ‘The Gallant John Joe,’ Hickey is organising the administration for the play’s appearance at the Edinburgh Festival.

“I’m learning the computer,” he says with his infectious laugh.  “I’m trying to produce the play myself which I have never done before.”

The Gallant John Joe, which initially toured the country last year, is the latest in a long line of Macintyre plays for Hickey.

“I met MacIntyre in 1983 and we’ve been working reasonably closely ever since,” he says.  “I have some kind of psychic understanding with him, I think.”  Others would agree if the rave reviews of Hickey’s performances of the unconventional, ‘theatre of image,’ plays are anything to go by.  The collaboration received worldwide acclaim in the late eighties when ‘The Great Hunger,’ toured Russia, America and Paris, winning an award at the Edinburgh Festival.

Most prolific as a theatre actor, Hickey is vague about his film career, searching his battered leather brief case for his CV, and his glasses, which he finds eventually, on the table amongst the teacups. His credits are impressive, with a recent appearance in Neil LaBute’s ‘Possession,’ but he talks of them dismissively.

“If I get one a year it keeps me out of gaol,” he says, admitting he hasn’t even seen  ‘The Last September,’ in which he had a small role.  “I’m afraid to look at it, to be honest,” he says.  “By the time it’s edited, everything is changed.”

And he seems sad at the numbers of actors being disgorged from Ireland’s acting schools who are more interested in the screen.

“Where you learn is in front of an audience on the stage,” he says.  “The audience will tell you things you never even dreamt of.”

Brought up in Naas when it took days of planning to get to Dublin, Tom started out working locally as a lab assistant for Irish Ropes.  And he might still be there now, were he not ordered to take evening classes in physics and chemistry.

“I said, ok, and signed up, knowing I had the summer to get out of it,” he says, chucking.  “I mean physics and chemistry?  Are you mad?  I didn’t know what I wanted from life, but it certainly wasn’t that!”

A job as a lighting technician with RTE paved the way out for Hickey, who had been playing around with acting in an amateur group, taking secret evening lessons in Dublin.

Then Deirdre O’Connell set up the famous Stanislavsky studio, teaching the Russian’s sets of exercises aimed at developing the talent in an actor, and revealing his potential.

“That was the watershed,” says Hickey.  “Acting became a goal, instead of an instinctual thing.  If I hadn’t tried it I’d have probably ended up in a lunatic asylum.”

His role as Benjie in RTE’s epic soap, ‘The Riordans,’ came along as he was learning his craft, and he stayed in the series from it’s start in 1964 until 1978, the year before the series ended.

“I’m very proud of what we did,” says Hickey, who played the main son, and loved the way the series reflected the issues of the time.  “I was insane a bit when I left,” he says, denying he was a victim of his own success.  “My attempt to do as much work as I could meant a decision had to be made.”

Hickey thinks of the theatre as a kind of religious ritual; almost a psychic exchange between the actor and the audience.  And he loves that connection.

“It’s the joy of delivering a line with the right relish.  You can sense that the audience are involved and you can tell when they’re following,” he says, adding that every night the play is different.  And he adores the element of risk.  Of not knowing if the words in a new play will work as a performance.  “You can’t tell if a play’s a success until the audience tell you,” he says.

Claiming to suffer horribly from nerves, especially before a one man show when he has nobody else to blame, Hickey says the trick is to organise the terror.

“An actor is supposed to be aspiring towards the creative state,” he says, meaning they should be in touch with the audience, and the script with all going well.  There have been times when he thought he’d forgotten his next line, but thankfully, he says, it’s always there if you can relax to get it out.  “There’s a shape and a rhythm to the line, and at tricky times my lips will form the words.”

Although he’s delighted at the profusion of work around for Irish actors, Hickey feels that theatre is not very distinguished at present.

“It’s a little bit too careful and conservative,” he says.  “MacIntyre and I sometimes feel like outlaws.  You’ve got to take chances. I don’t mean you should walk blindly into something stupid, but potential should be given opportunity.”

Holidays for Hickey are rare, because he never has any money. He laughs, patently unconcerned, but admits that he’d never encourage his son to become an actor.

“He’s a video editor.  A very good one,” he says of the son from his very brief marriage.  Then he turns the conversation back to money. “You’d be amazed what actors get, even in the Celtic Tiger,” he says, laughing uproariously.  “But if it suits you it’s the healthiest thing you could do, despite the lack of finance.”

Most of Hickey’s time out revolves around his work.  He reads widely around every new project, and travels to see inspiring performers.  He adores walking, but uses the time to go over his lines, or think through a difficult scene.  But he does have other interests too.

“I love sport, especially GAA,” he says, saying having played as a boy, he is a mad keen follower. “MacIntyre played too,” he adds.  “He played for Cavan.  I played for Kildare.”

Horse racing is another diversion picked up in childhood.

“My Da sold tickets at Naas Racecourse, and I’d bring him down his sandwich and flask, and after the fourth race I’d go in with him past the turnstile and be there for two races.”

A keen follower still, Hickey refers to the Epsom Derby to explain his future.

“I’m coming down the hill heading for Tattenham Corner with three or four furlongs to go.  So I’m going to be highly selective in what I do.  It has to be something important that does something in the theatre.  And not something routine.”  He is, he admits, an idealist, who is totally obsessed with acting.  “Some people find that ridiculous,” he says.  “But I can’t change.”

The Gallant John Joe tours Newbridge, Waterford and the Yeats Summer School during July, and The Edinburgh Festival in August.

Published in the Irish Examiner in 2002.