The Death of Father Gerry Reynolds. 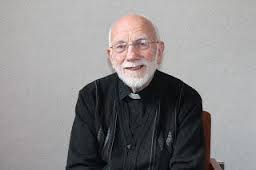 I was saddened to hear of the death, yesterday, of the great peacemaker, Father Gerry Reynolds. I interviewed him for Reality magazine back in 2009. This article, below, has been quoted, in the BBC amongst other outlets, as part of the media coverage of his death.

Father Gerry Reynolds is a happy man.  Always interested in ecumenicalism, he feels that he is in the place God intended him to be. For the past 25 years he has lived in Clonard Monastery in Belfast; and his work there has had a profound effect on the community. Along with Father Reid he is a legend; commanding enormous respect.

“I am so grateful,” he says.  “I have a sense of the hand of God guiding me and helping me along the way.”

Born in Limerick, Fr Reynolds always wanted to be a priest.

“In those days people would encourage you,” he says. “People would say, ‘good lad; that’s a good thing to do.’  My dad died when I was 6, but my mother had a big influence on my life, as well as the local parish. Two of my uncles were Redemptorist Priests.”

Liking the missionary aspect of the redemptorists,  Fr Reynolds took his vows in 1953. He studied for a BA in Galway, then when back to the seminary to finish his theology.

A spell working in the publications followed.

“I was looking after the promoters and managing the financial side,” he says. “I wasn’t involved in the editorial, though I did, at one time edit a few issues of ‘Reality.’ I was then sent to work in the communications centre; and I became involved in the Religious Press Association; and in the Legion of Mary.”

In 1975 Fr Reynolds was assigned to be the leader of the redemptorist community in Limerick.

“This was a difficult time,” he says. “A time of transition in community life. After the Vatican Council all the religious councils had to rethink their meaning and reshape their constitutions and statutes. It was a time of questioning the meaning of the priesthood as well.

“I think I was a failure as a leader of the community,” he says.  “After three years I was not selected for reappointment, and that was a great blow to my self-esteem.  They were painful, difficult years, but looking back that time was formative for me. I am now able to cope with failure.”

His next position, in Athenry was much happier.

“I began to feel young again.” There are two events, in particular, that father Reynolds remembers from that time. The first was the excitement on hearing that Pope John Paul 2nd had been appointed; the second was the Papal visit to Ireland in 1979.

“That was an extraordinary moment; the Bishop of Rome coming to Ireland. It was almost like St Patrick coming back.  It was one great Parish Mission, and the renewal of faith and of confidence in all the people.”

When he was asked to go to Clonard Monastery in Belfast in 1983; and encouraged to reach out to the people of the other churches he was very happy to be assigned.  Because his belief in ecumenism had grown over the years.

“When I was ordained, Pope John 23rd was reaching out to all the churches. One of the things he set for the council was the restoration of the Unity of Christians. Being ordained then, marked my life in that way.”

Fr Reynolds was also influenced by Charles de Foucauld; the French priest who died in the Sahara in 1916.

“He lived among the Touareg people and saw himself called to be the Universal brother at the heart of the Christian vocation. A group of priests in France; inspired by his experience, began a fraternity of priests called Jesus Caritas Fraternity. That has been a big influence in my life.

“Jesus caritas holds that the heart of faith is the love of God revealed to us in Jesus, and the witnessing of him in our lives. Charles de Foucauld wanted to proclaim the gospel with the whole of his life. Contact with Jesus Caritas has led me into the heart of the Redemptorist way of life.”

There was one challenge in Belfast.

“It was ‘how do you stop the killing?’ I asked Father Reid, what we could do to stop the violence. And he said to me, ‘the only hope is dialogue with one another; because dialogue opens the space for the spirit of God to work in human history.’

“People would say, ‘there will never be peace here.’ But we worked out of a great hope based on knowing that God’s purpose is hope for the Christian Church to be truly united in real and fully visible communication. So that in every  place we can celebrate the Eucharist together. One church, in many churches.

“In preparing for unity we have a project here called Unity Pilgrims. The pilgrims are fully part of our own parish, and they go to Sunday mass; but as well as that they go to a Presbyterian, Methodist or Church of Ireland Church.

“The people have changed since peace,” he says.  “But there is always work to be done. Every generation is like a continent to be won for Christ. That missionary task remains.”

A WEEK IN Fr REYNOLD’S LIFE.

Sunday. I went to Aghagallon Parish to say two mass twice as a supply priest. I had my dinner, and watched the All Ireland hurling match. Then I walked along the Lough Shore.

Monday and Tuesday. 7.00 mass. We had two days of meetings for the beginning of the new Triennium. On Tuesday we had Eucharist together, as a community. We had a celebration dinner of pork.

Wednesday. 12.20. Mass in the community chapel. I worked on a booklet for an initiative enhancing faith and church. It’s for all Catholics in the parishes to motivate and equip them for the ecumenical church. I visited a sick confer. In the afternoon we had a meeting of Cornerstone Community; an inter church community.

Thursday. 7.0 mass. We had 4 sections of the Novena.  I officiated at the wedding of a girl I confirmed in the Lady of Peace Church. She had been Presbyterian. I visited a couple whose wedding I did in Edinburgh 5 years ago. I had helped her through baptism and confirmation. They have three children now.

Friday. 7.00 mass. I visited the confer in the nursing home and worked on my project.

“Each day we have morning, and evening prayer in the church. In my time off I go for walks or visit friends. I love to read poetry; particularly Kavanagh, Seamus Heaney, or Manley Hopkins. I love the old psalms too.

“Brother Francis, a Redemptorist said to me once, ‘God calls us in significant ways at different times of our lives. In youth it’s to obedience; to listen and respond to his call. In middle age he calls us to fidelity, to stay the course and to begin again, and in the latter stages he calls us to abandonment. Really that ‘here I am Lord, use me, go with the flow.’ I am in that third stage now.”