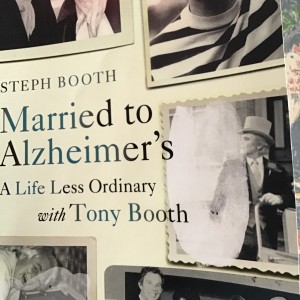 When Tony Booth was first diagnosed with Alzheimer’s, his wife, Steph, was at a loss. The medical profession seemed to know little of the reality of the illness, and information was sketchy.

“I was told, ‘this might happen and that might happen, and maybe you should talk to the Alzheimer’s Society,’ but there was nothing about the coalface, and how you live with it.”

This was 2004, and the couple were living here in Ireland. They’d met eight years previously, at a garden party given by mutual friends, and they’d been happy – although their lives were not without complications. They had twelve children between them, through a series of disastrous relationships, and Steph suffered from the black dog after an abusive childhood.

An actor, and father to Cherie Blair, Tony was well known as a loose cannon. He smoked hash, heavily, and his profile meant that the couple were plagued by the press. And Steph was 24 years younger than Tony.

“Tony was known to be outspoken and difficult and it was sad the way he fell out with his kids.”

How then, did the marriage work?

“We had long conversations, we liked the same things, and we had a good time together. We made each other laugh.” She pauses. “When we weren’t having a good time it was pretty awful, Tony was difficult, but there were highs, and highs were worth it.

“And because I was with him for 23 years, I got behind the public façade and discovered his vulnerability. He was always a drama queen and if we had a row, he said that was the end of everything! I learnt to say, ‘well it’s not, but if you’re leaving, shall I pack your bag for you?’ After a while he stopped saying it. That’s how it worked. He lived with me longer than he’d lived with anyone, and we worked it out. I don’t know how, but we did.”

Tony’s son in law, Tony Blair was Prime Minister at the time, and the press loved to stir up family disharmony.

“There was actually very little they disagreed on. Tony (Booth) had a campaign for pension rights, socially and economically, and he was always harassing Tony Blair about that, and, obviously we both disagreed about Iraq – we were on the anti-war march in London, but their relationship remained strong and good.”

It was, partly, to escape the press that the Booths came to Ireland in 2003, settling in County Cavan. And it was here, that Steph noticed the first signs of Tony’s dementia.

“He was getting confused and was mixing reality.”

The problem was, that Tony wouldn’t admit that anything was wrong. And in order to get him checked out, Steph invented this lie, and said that the Irish State had a system that everyone over 75 had to attend a doctor for a check-up.

“My GP suggested that he attend a psychologist, and he was amazing! But it was very hard to get a definitive diagnosis of Alzheimer’s.

“Even some medical professionals think that someone with dementia or Alzheimer’s is non-lucid the whole time, but they can be extremely lucid, and then totally confused, and when Tony was first diagnosed his periods of lucidity were longer and more frequent than his periods of confusion. I had to fight really hard to get a brain scan, and even though that showed he had Alzheimer’s the doctor said that he couldn’t have – because he was too good. He didn’t understand that he was just having a good day.”

Frustrated at the lack of information, and wanting to put this to rights, Steph contacted the Irish Times, and offered them a column detailing her experience of the illness. And she told it, exactly as it was. She loved the prestige this gave her, and the way strangers, recognising her from the photo that appeared with her column, would approach her, chat, and relay their own experiences.

The couple loved Ireland, but they returned to England when Tony’s health deteriorated in order to be near their families. Steph stood in the 2010 election there, as a labour candidate, but this was the year the Conservatives stormed back to power, and she lost.

“But I Came second,” she says.

She was, later, elected Mayor of Todmorden, the town in West Yorkshire where the couple had settled.

“That was really nice,” she says. “And I think the only time I became upset, was when a couple of Councillors said to me, ‘Surely you can’t have Tony as your official consort when he has dementia.’ I said, ‘That’s his problem, not yours. Tony is coming with me.’  It had never occurred to me that he wouldn’t be my consort, and he would have been devastated if he couldn’t be. The issue with Alzheimer’s really is people’s attitude towards it.”

In May 2017, Steph was in Ireland for a radio interview, and she popped into the Irish Times and met the Features Editor Conor Goodman.

“He said, ‘You should do a book,’ and I said, ‘Really?’ It had never occurred to me. But Conor sent some of my columns to Penguin, and they contacted me and said, ‘Will you come to London?’ and they gave me a contract.

“Tony was getting more and more ill, but he understood that I was writing the book, and he was thrilled. After he died, I continued writing it, because he made me promise to finish it. I was devastated when he died, but I didn’t cry when I was writing the first draft – I felt detached. It was when I re-read it for the edits – that’s when I sobbed.”

Towards the end, Tony lost the art of conversation.

“But he was still telling stories. He’d tell them on a loop, so if you stayed long enough, you’d hear the first one again, but they were firmly embedded in his brain. It was a fixed way of communicating when all conversation had died.

“You grieve and your heart breaks when you’re watching someone disintegrate in front of you, but when he’d gone, it was devastating. I think I’m only just coming out of the trauma and shock and heartbreak of the whole experience. Caring for him; his death; he was such a large part of my life and I miss him desperately. I feel him around me sometimes, especially when I’m in the garden. Anyone walking past would think I had lost my head, because I’m chuntering away to him.”

Steph’s advice to carers of loved ones, is to remember, at all times, that you’re a partner too.

“I was so much in care mode that I had to remember that Tony needed hugs and he needed to be touched, because you do forget. There is a good reason you are here, caring for him, and you have to demonstrate that.

“When I close my eyes and think of Tony, I see him laughing. Always laughing. That was the thing that saved our marriage. He could always, always, make me laugh.”

Published in The Irish Examiner on May 4th.