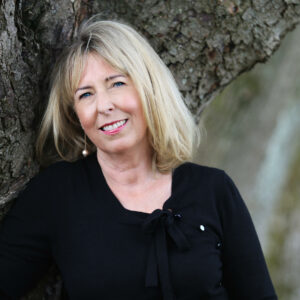 Some years ago, Siobhan Macdonald took a taxi ride from Long Island to the airport with a taxi driver who seemed out of sorts. When she told him that she was a technical writer, in New York on a course for her work, he practically hijacked her.

“He started telling me about Vietnam, and friends of his who, left behind in Laois needed help; stories of the drugs war, the corrupt American Government, and of someone who had tried to poison him. The stories got wilder – he clearly wasn’t rational – and he wanted to pull over, find somewhere quiet, and work on a book from this huge stack of papers piled on the front passenger seat. He said, ‘You can help me write my book – I’ll pay you.’”

She managed to talk him down – and get to the airport, but he lost his temper – kicking the tyres as she ran for the terminal.

A year or so later, renovating a basement apartment in Edinburgh with her soon to be husband, she got to know the very grand, elegant woman who lived in the apartment above her. She drove a black cab and had all kinds of stories about the people she had met. Siobhan was intrigued.

And when she was planning her latest crime novel, she thought she would set it around a woman taxi-driver.

“I didn’t want a traditional police procedural’, she tells me on zoom from her home in Limerick. “I wanted an amateur with a nose for crime. Taxi drivers are in a position to know people’s business. They are called on by Garda when there’s been a traffic accident where there was no CCTV; they see altercations in the street; they bring people to and from hospital, and children to and from school. They have insight.

“And they have to be good at reading people’s behaviour. All they can go on is a phone call, or how the customer approaches the cab. They have got to be able to handle people and make a judgement that they are safe.”

In The Bride Collector, Ellie, who once lived in style, has fallen on hard times. She’s driving a taxi in a small tourist town in County Kerry where secrets thrive. The novel opens on a March evening when Ellie is driving a bride to be home after her hen night – before dropping her more sociable friends at a nightclub. The talk is all about murder – and the two women recently found dead in the town, left decked out in their wedding dresses.

When, the next day, Ellie learns that the woman she drove home has become the murderer’s latest victim, she is as horrified as she is intrigued. She shares her suspicions with an investigative journalist Cormac Scully – and – not trusting the local Garda, who have their own reasons for wanting to keep the investigation quiet, they decide to do some digging of their own.

The idea stemmed from Siobhan’s fascination with small rural towns.

“When people are living cheek by jowl, there can be open secrets – thinks people don’t want to talk about,” she says. ‘Secrets that people know about that which don’t make it to the paper. In my fiction, the Garda has his own agenda and doesn’t want big wigs coming from the capital telling him how to do his job.”

Luckily for Cormac and Ellie, the Gardai have a whistle-blower in their ranks; someone who has seen what can happen, and who wants to see justice done; and he happens to be a good friend of Cormac’s.

A traditional whodunnit – with lots of warmth and humour – and little blood and guts – The Bride Collector is a brilliant character-based story that zips along at a ferocious pace. There are lots of red herrings and twists, including a breathtakingly whopping one towards the end. The author cleverly drip-feeds information throughout the novel – and the more we learn about Ellie, an unreliable narrator with a mysterious past, the more fascinating she appears.

The author, who grew up reading Agatha Christie, was always writing as a child.

“I entered language and poetry competitions in school, and I wrote dramatic duologues for myself and a friend to act out on stage.”

But when she left her Limerick Coláiste, Ireland in the middle of the eighty’s recession, and electronics were deemed to be the next big thing. Siobhan studied Electronic Engineering at NUI, Galway, but, finishing her degree, realised it was not the career for her. Figuring how she could use her degree to write, she answered an advertisement for technical writing, and went to Dundee to be trained up as she worked.

“I couldn’t believe how cold it was,” she said, “but I met a brilliant group of people there, (including my husband,) who all had different degrees; they trained me well, and it was fun!”

After two years she opted to work in the South of France, and then it was back to Scotland as a technical writer for internet start-ups. All this time Siobhan’s grandmother had been posting her irish jobs pages, trying to tempt her back to Limerick, and in the mid- nineties, her Scottish husband said, “Let’s give it a go, and see what happens!”

All this time Siobhan has been writing creatively.

“I sent short stories to competitions and to Scotland on Sunday, but I didn’t have much luck. Then, in 2010, I had an idea for a novel. I sent it to agents and publishers and got positive feedback, but it was a novel of two halves – half romantic and half a gritty thriller. They said I had to decide which genre I wanted to write.”

She decided on crime, and her first novel, Twisted River came out in 2016. There have been two other books since – the Blue Pool and Guilty – which examined the shenanigans around politics in a small Irish Town.

These last two books have taken a great deal of research. And its not just the authenticity of her plot and characters she needs to get right, but the political correctness of language too.

“Language moves on so fast,” she says. “For example, my sister, at birth was called mentally handicapped, but you can’t say that anymore. Then it was brain damage, but that’s no longer acceptable. And the other day, a parent received an avalanche of abuse on Twitter for saying his, much loved, child had special needs.

“I did so much research! It put me in my comfort zone, but I only needed an eighth of it. Next time, I think I’ll follow Ian Rankin’s advice. He used to spend so much time on research that he then discarded, that he now writes the story first.”

What that next book will be, is not yet clear.

“I have an idea for another standalone book; I know the story; I know four or five main characters and how they will interact, but I don’t yet know the structure. But I can imagine at least one sequel to The Bride Collector. I’ll have to chat it through with my agent, Jo Bell.”

Next time around, Siobhan is determined to avoid a big structural edit. Because last November, when one came her way, she was struck down with Covid 19.

“It was rotten. I didn’t end up in hospital, but for two or three weeks I had no interest in reading, and I could not look at the news because it scared me. I didn’t want to know where my illness might go.”

The Bride Collector by Siobhan Macdonald is published by Constable: €15.29. Kindle: €5.07.

Published in the Irish Examiner on 11th September