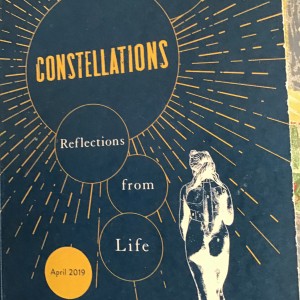 Sinead and I first met on a snowy morning in 2010. She was on crutches after a hip replacement; my arm was in a sling because I’d tripped over my dog, and the writer Howard Jacobson, who we were both there to interview, asked if all Irish journalists were broken.

In the years since, Sinead has been dizzyingly busy. A prolific journalist and broadcaster, she presented RTE radio’s Book Show for four years; she’s edited three anthologies – two of which won an Irish book award – and she’s a constant as a moderator/interviewer on the festival scene. She’s also found time to write a few short-stories, and has started work on a novel.

Right now, she’s writer in residence at University College Dublin, a post which requires her to teach on both the MA and MFA programmes; she’s putting together yet another anthology, and her debut book – a collection of highly praised essays, which have also sold to America, is about to be unleashed into the literary world. There has been so much pre-publicity expectation, that Sinead has already been booked to do 27 events.

“It feels really terrifying at the moment,” she says, when we meet to discuss Constellations. “There’s that fear or repeating yourself and of being boring. I’m used to being the person on that stage asking the questions, and I’ll have to figure out how to talk about the book.”

There’s plenty to talk about. It’s an original, wide ranging collection, which charts Sinead’s life through her body and body politics – and contains tales of sickness, child bearing, motherhood, feminism, loss and death – but references social history, the arts and politics. Above all, it’s about the restrictions suffered by Irish women – and is sure to resonate, and spark a myriad of ideas in the reader.

For all her nerves, Sinead can’t help but be grateful for the attention. As a journalist she knows what an honour that is in a crowded market. But how did that change from journalist to essayist begin?

“About seven years ago, on the anniversary of the day I got leukemia,  I wrote something on my website and a publisher got in touch. He asked to meet me. I’d never thought of writing memoir, but I started to write these pieces for him, and he was really interested. And it was a big publishing company. But they said, ‘we like the sick, death element of it’, and I didn’t want to write a book like that, so I said ‘no.’

“I started reading books by people like Leslie Jamison on body feminism, and realised that was what I had been trying to do – I found the form a really brilliant way of investigating how I feel about something.”

So, in a sense it was a book that demanded to be written?

“Yes, but it was never going to be straightforward. People think that non-fiction is something you coughed up out of your diary without any care, but I find it harder to write than fiction. Things are in your head but its different when you start negotiating with the page.”

The book opens with Blue Hills and Chalk Bones – an essay that explains in graphic, but artistic detail, both the leukaemia Sinead endured in her twenties, and the juvenile arthritic problems that led, eventually, to that hip replacement. Appearing in Granta, this was the first of her essays to be published.

Mingling the pain of her hospital experience, and the frustrations of negotiating the teen years through the prism of sickness, it’s a masterclass in essay writing, but the form didn’t come easily.

“I sent the first version to Siobhan Mannion, a friend and brilliant writer who is always my first reader, and seeing the reams of social comment there – on the evil church and the dogma, she said, ‘You need to get rid of loads of this.’ She told me I was avoiding writing about myself by burying the personal in political dogma. I resisted changing it, but I knew she was right. That was hard.”

And if that one was difficult, writing about Rob – her first love who later died in a tragic accident -proved harder still, because, she’s still in touch with his family, and knew she had to take their sensibilities into account.

“I had promised that essay to Kevin Barry for The Winter Pages nearly three years ago. The deadline was looming around the time of the Brexit vote. I emailed Kevin in a panic and said, ‘I can’t give you the piece. I’m worried I’ll mess it up.’ I was always running away from it, going back to it and telling myself I could not do it. I’d been at it for almost 10 years, but If I hadn’t felt I’d pulled it off I wouldn’t have included it in the book.”

So many of our most talented writers were sick as a child – from Bram Stoker, to Liz Nugent, and Christine Dwyer-Hickey. And, certainly, the experience has impacted on Sinead’s career choices.

“It helped me on two levels,” she says. “I spent a lot of time being sick, sitting in waiting rooms and being confined to bed. I was like a triathlon reader spilling through a couple of Agatha Christies a day. And I kind of turned my hobby into my job.

“And by missing all that school, I was always playing catch up, so I was used to working hard and pushing myself. I’m not good at doing nothing. And though there have been times, through fear of saying no, I have taken on too much and felt overloaded, I can’t imagine not being busy.

“When I gave up the Book Show I thought, ‘I’ll have loads of time, but it’s like a collapsing sand-dune where it gets instantly filled in. But something had to give, and I knew I was never going to finish this book if I didn’t make a big step.”

Wanting, in the future, to write full time, Sinead would like to continue conducting public interviews, and keep up some teaching. Has the journalism helped her as a writer?

“I remember, a few years ago, when I wanted to write and wasn’t doing it out of fear, I interviewed Justin Hill and John Banville a week apart. Justin said the worst thing a writer could be was a journalist. He said, ‘Go and work in Tesco!’ but Banville said that was the worst advice ever. He said, ‘it teaches you about pace and story telling and language.’

“What journalism really did teach me was discipline, deadlines, and just knuckling down. And that is the hardest part of writing. You have to keep showing up and putting words on the page.” She hopes to do just that in May, when publicity for the collection wanes.

Poetry peppers Sinead’s collection – and the book ends with an inspirational non-letter to her daughter, detailing the trials she might face because she’s female.

“I felt like I had to end on that point. My life was so much better than my grandmother and great-grandmother’s lives, and hopefully, life will be even better for my daughter. But she’ll possibly face the difficulties and awfulness that comes of being female because of patriarchy and rape culture.

“It’s a difficult navigation for women in the world, but I wanted to end on a hopeful and open note. There are lots of women in this book who have difficult and different lives, but hopefully hers will be just, and free from health problems.

“When she was six weeks old she got bronchiolitis and we were in Our Lady’s Hospital with her for a few nights. There was a baby in the room next door who had been there for almost a year. I don’t think we think enough about the fragility of life. We give out about certain things. I guess this book is saying, remind yourself what you have.”