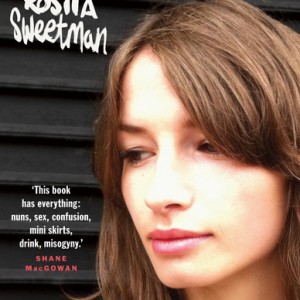 Rosita Sweetman published her first novel back in 1974, when she was just 25. The coming of age story set in sixties Dublin showed a young professor’s daughter, Elizabeth,  struggling to find her way in an Ireland full of mixed messages.

The novel opens with the death of Elizabeth’s mother. It takes her through her convent boarding school, through a job at college, a brief career in modelling, and a longer affair with a glamorous controlling older man.

Beautifully written, it conveys the joys and heartbreak of a childhood devoid of affection, and the tumultuous emotions of first love. This reissue, if nothing else, provides a stark remainder of the restrictions imposed on women forty years ago.

Looking back at the recent past, Elizabeth muses on all the things she once thought important. Her list includes, sleeping with men; going to church; what people said, and particularly what men though about you.

“I used to feel a fool, a failure, a factory reject if they didn’t say, ‘You’re the greatest, the most beautiful, the sexiest girl we’ve ever met.’”

Crucially, Elizabeth never thought money important. It was all about getting a man who had money – from your father, to a boyfriend, to lovers then a husband. Equally a career wasn’t considered necessary.

Whilst this is a particularly Irish book – it shows to perfection the nuances between Catholics and Protestants, and paints a realistic portrait of Dublin pub life – it has universal relevance and appeal. This was a time when women  doctors were a rarity worldwide, and it wasn’t done to tell children they were pretty or bright for fear of ‘turning their heads.’

The convent was little different from the English protestant boarding school

I attended; we didn’t have the threat of hell and damnation, but we, too had crushes on other girls, and spent our time talking about boys. It was imperative to have a boy to write to, but we hadn’t a clue how to talk to them,  or how to behave in male company. Few, from my school, attended university. It was all about learning how to behave in a world ruled by men.

As Sweetman says in her afterward, all of the rules back then favoured men. If a girl let a boy touch her breasts on a first date she was a whore; if she didn’t she was a frigid Bridget. If she rang a man after a date she was fast, yet when he didn’t ring her she was suicidal.

And if the conduct of the men in Fathers Come First is shocking to today’s readers, it’s the women’s acceptance of the situation that really hits a nerve. When Elizabeth first met Colin, she wasn’t exactly liberated – but she enjoyed her jobs in College, and in modelling. Passion killed all that.

Discouraging her from applying to College, Colin encourages her to give up her work, so that her whole life revolves around him. He buys her clothes, and dictates her behaviour expecting fidelity, whilst he feels free to sleep with whomever he likes. Constantly miserable, Elizabeth allows this to happen, justifying his behaviour, because without him, she no longer knows who she is.

Elizabeth’s greatest asset is her beauty, but it doesn’t bring her happiness. You’d think model training school would teach beautiful girls self-esteem, yet, even here, it was all about subservience. The training models received for going on a date, as,

“The little lady would behave like a little dumb idiot the whole time, allowing the Escort to lead her to a table, pull out her chair, choose her food, order it for her, order the wine and the conversation.”

By the end, Elizabeth’s life isn’t resolved; but she has learned the necessity of leading it on her own terms. Progress indeed. This novel has been compared to the work of Edna O’Brien, but it reminded me more of the English writer Margaret Drabble’s early work. Drabble’s heroines were intellectually able, but they shared Elizabeth’s naivety and lack of motivation.

The novel was, deservedly, a best seller back in 1974, but does it still have relevance now that Lilliput has reissued the classic forty years on? Sadly, it does. Women have come a long way in forty years, but in some ways men still wield the power. Young women still suffer from low self-esteem. That old fear of pregnancy has given way to worry about fertility, and finding a man willing to commit when the time is right.

For those reasons, and more, this novel makes a fascinating read. I adored it, and just wish that the author had gone out to write a string of novels. Perhaps she will now.