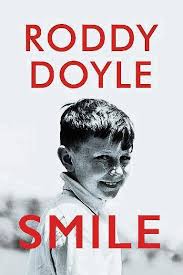 When Roddy Doyle was thirteen years old, and in first year at the Christian Brothers School in Sutton, the class were trying to convince their French teacher not to give them homework. The Brother looked at Roddy and said, ‘Roddy Doyle, I can never resist your smile.’ The class were stunned to silence.

“The silence was of the quality I haven’t experienced since,” says Roddy.  “There was an intake of breath, all around, and immediately I was ‘the queer’ or ‘the homo.’ It was terrible!”

The Brother never said it again; and he never laid a hand on his pupil, but the slagging continued until the brother left, suddenly, in the middle of the following school year. But his comment had a profound effect on the teenager. And he’s used the incident to kick start his latest novel.

Looking distinguished, with his newly grown beard and moustache, Roddy is in great spirits when we meet to discuss Smile. He’s almost 60; and I wonder if it felt like the right time to catalogue his own experience?

“I’m not aware of that,” he says. “This novel wasn’t on my list of things to do. And it wasn’t, ‘I’m going to write about a boy in school.’  I started with the second chapter.”

Smile features Victor Forde– a man of Doyle’s age, who, lonely after he has left his marriage, is looking for a new local. Much of the action takes place in the pub, as he meets a group of regulars, and negotiates his way into their circle. It’s a delicate balance – finding the right things to say.

“Men who don’t know each other can spend all night talking about football, and incidentally get to know each other. They begin to realise I like this man – he is sound.”

Roddy is something of an expert on the Irish pub. His recent play, Two Pints was set, and performed in one. It travelled around Ireland last year, and is to return next year.

“It was inspired by my father’s death,” he says. “It’s about two men in a bar, and in act one, one of them is visiting his father in hospital. In Act two, he’s waiting for a text from his sister calling him in to see his father who is dying, and Act three is the night of the funeral.

“I wrote it some months after my father had died. It seemed fitting. And my mother, when she saw it, said my father would have loved the humour, and the fact that I used my own experience as the skeleton for it.”

There are echoes of Roddy’s life in Smile, too. Victor, like the author, attends University College Dublin; but he then veers into journalism – writing some clever, often vitriolic music reviews, before failing to write a novel. And although Roddy wrote a few pieces for In Dublin, this was during his first, or second year in teaching.

“My memory of going into the In Dublin office is vague. I didn’t have any Victor moments, thinking, this is life changing. I was in love with teaching at that point.”

He wrote his first, unpublished novel in London, in the summer of 1982. And although the rejections were disappointing, they didn’t hold him back. He went straight into writing The Commitments, making up rules for himself and producing something startlingly new.

He self-published to rave reviews in 1987, then sent the book, with the reviews, to publishers. It was republished in February 1988 by Dan Franklin, then of Heinemann, who is still his publisher today.

By the time the famous Alan Parker movie came out in 1992, Roddy had done a lot more writing and living.

“I’d written The Snapper, and a couple of plays that had gone on in the SFX and the Olympia, and I’d met my wife, and had children.”

His work ethic remains legendry. In the past four years alone, as well as writing Smile, and Two Pints, he’s written a libretti; a stage version of the Snapper; and a film script about homelessness. There’s his work with adult literacy, his newspaper column, and his involvement in Fighting Words. Then there was, The Second Half, the book Roddy ghosted for Roy Keane; the only book, he says, that he signed a contract for before it was written.

“We started work in January in the knowledge that we were going to deliver a finished book in June. I’ve never been in that position before, and it felt a bit like, well, here’s a glimpse of the adult world.

“If Roy had been less enthusiastic, less bright, less connected to the project; if he had been hesitant at all, reluctant to meet, or had taken less interest in the line by line structure…”

He was an amenable subject?

“Oh, he was fantastic! A terrific editor who took great glee in pointing out typos to me. And he had good ideas. He was a joy!”

With his Booker prize win – For Paddy Clarke Ha Ha ha – his Bafta, and numerous other prizes, Roddy is a major part of Ireland’s literary establishment, yet he always seems slightly outside it – hating the idea of becoming public property. He loves meeting the men he’s been friends with since school; men who share his memories.

“There was one Brother who used to teach boys how to wrestle. (mentioned as an abusive incident in the book.)  He picked his victims, and asked them to stay back. In retrospect there was a horrible logic to the guys he chose. A certain vulnerability; maybe something to do with the home, or the boy himself?

“I gave these two friends of mine proof copies of Smile to read – they were telling me how the book brought back memories, and someone mentioned the name of that Brother. A younger guy, who had been to another Christian Brother School, sat up and said, ‘Him? He was at my school. And he was still teaching boys how to wrestle.’ He had probably been moved from our school because of that.”

Smile is far from an angry book. Superbly conceived it’s one of Doyle’s best novels. It’s poignant, yet it’s packed full of humour. I finished the novel on the LUAS – and I’m still reeling with shock from the twist at the novel’s close.

“Good!’ says Roddy, admitting that initially, he had qualms about it.  “For the first time, ever, I sent a second draft to my editor.”

A sentence near the end, was inspired by a homeless man.

“I was maybe six or nine months into the writing when I heard a man on the radio saying he was homeless. He had the crack in his voice of middle-age, and a chaotic life, and he was saying, ‘I watch people walk by, and they always seem to know where they are going.’ He said they were keeping a secret from him. I decided my character was going to meet this man and hear him say it.

“I’ve no doubt whatsoever, that some of the traditional homeless men we’ve seen over the years have been through the hands of the Christian Brothers.”

Roddy feels no rancour towards the Brother who ‘flirted’ with him; if he met him today, he would shake him by the hand, but the incident still plays on his mind.

“I remember around the time The Woman Who Walked Into Doors came out, there was a rather nasty article in one of the papers here. There were posters of me around the city after the Booker Prize; one of them was of me smiling. The article referred to my smirk and I remember being upset by it. I didn’t mind the article – envy was coming off the page – but the word smirk sent me spinning slightly.  It took me back 20 years to the classroom wondering what it was about me that was wrong.”

Published in The Irish Examiner on 9th December, 2017