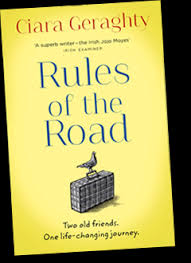 Ciara Geraghty has been publishing books for ten years now, and in that time, has proved to be a sensitive writer, whose novels combine a serious theme, with humour and characters so gorgeous, one wishes they could become friends. She’s been writing in the genre ‘Up Lit,’ since long before the term was invented.

To me, she’s the Irish JoJo Moyes, and coincidentally, her 7th novel, Rules of the Road, shares a theme with the book that propelled Moyes into stardom. Like Me Before You, Geraghty’s novel examines the issue of Assisted Suicide, but whilst Moyes’s book concentrated on a love affair, Geraghty’s celebrates friendship.

Terry is a wife, mother and worrier, whose life is content, if not overly exciting. She doesn’t work, because she is needed to make life run smoothly for her husband, Brendan, and for her grown daughters, Kate and Anna. They don’t live at home but expect her to be on call for help and support when their lives get stressful – as they constantly do.

And then there’s Iris Armstrong – Terry’s only real friend. Iris has Multiple Sclerosis. She has it, but it doesn’t get her down. Terry watches, impressed, as her friend runs the Mini marathon, and copes with a smile when later, she’s compelled to walk with sticks. Her friend embraces life. So, when, one day, Iris disappears, and Terry, who is terminally nosy, discovers that she’s planned a one-way journey to Switzerland, she’s flummoxed. And, when she finds a letter which leaves no doubt of her friend’s intention, she immediately determines to find her, and make her see sense.

There’s just one problem. That same morning she’s called into the nursing home where her father lives and told that the place has a rodent infestation. She must care for him whilst it’s sorted. This comes on top of her other, immediate commitments; what will happen to Brendan if she’s not there to support him through a crucial meeting? And what of Kate, who needs calming through a theatre production, and Anna, who is a bag of nerves as her finals approach?

When she sets out for Dublin Port, where the air-phobic Iris is starting her journey, Terry expects to be able to dissuade her friend at once; but it doesn’t prove that easy. Against Iris’s wishes, she buys tickets for her father, her car and herself, and so starts a road trip that takes in London, Dover and France.

Terry is scared of driving; scared of motorways, motorbikes – almost, of her own shadow – but she has to step up to the mark in order to save her friend, so she faces her fears, and the trip turns into a voyage of discovery.

As well as discovering her own capabilities, she learns that Iris has been hiding the worst aspects of her MS; that her marriage to Brendan has become stultifying, and that, despite everyone’s complaints, home life will not collapse if she’s not there. From here, she starts to wonder at the value of her life.

‘I never got thanked, or paid, or promoted …. I’m fine with that. It’s the niggling sensation that your daughters might look at you now and feel the tiniest bit sorry for you. That’s the bit that stings.’

Terry’s Dad, who was once belligerent and scathing, has become benign as dementia takes hold. Vague in general, the former driving instructor remembers two things well; the time he met Frank Sinatra and the Rules of the Road. It’s this latter that gives the book both its title, and its structure, with each chapter heading comprising a rule.

I loved this book.  It contains all the author’s usual warmth and humour. I loved its portrayal of friendship. But mostly, I loved it for its sensitive and authentic approach to Assisted Suicide. Having ghost-written the campaigner Marie Fleming’s memoir, I can attest to its veracity.

Rules of the Road by Ciara Geraghty.

Published in the Irish Examiner on 1st June.