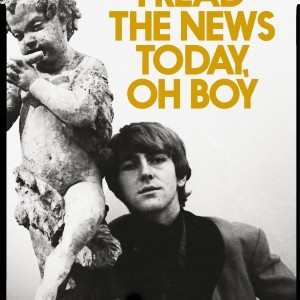 If you take the Sally Gap road out of the Co Wicklow village of Roundwood, you reach one of the most beautiful views in the whole of Ireland.

I’d been there often, looking down into a black lake fringed by a white sand beach before I learned that Luggala, home to the Guinness heirs was nestled there. And even after I’d met Garech Browne, the pony-tailed incumbent of Luggala, I hadn’t heard about his brother.

At least, not knowingly. I lived my teens to the backdrop of the Beatles, and knew the iconic track, ‘A Day in the Life’ by heart. However, I’d never heard that one Tara Browne had inspired the first lines.

Paul Howard came across the story a decade ago, while writing a piece to commemorate Tara’s life and death. And he was so fascinated with his subject, that he felt compelled to research him further. And research he did — taking 10 years to talk to everyone he could find who had ever known the man who introduced Paul McCartney to LSD.

It was a mammoth task. Because, as Howard writes, “Fifty years on, he is familiar to many as John Lennon’s lucky man who made the grade, only to blow his mind out in a car. But while ‘A Day in the Life’ immortalised the life of Tara Browne, it also succeeded in reducing it, for he was more than just another slumming aristocrat who lived too fast and died too young.”

Garech and Tara moved into Luggala with their mother, Oonagh Guinness, after the breakup of her second marriage. It was an unconventional childhood. Tara mixed with ambassadors, artists, and bohemians — Brendan Behan was a regular visitor — and the only rule of the house was that guests mustn’t be boring.

Given no structures, Tara was a regular presence at parties. One guest remembers him, aged eight, walking joyously down the centre of the dining table. Lacking peers, play dates involved flying someone in from London. He shunned school, and moved with Oonagh and her new husband to Paris in his teens, where he inhabited a sophisticated world.

He could have been a brat — but friends from the time clearly adored the blond-haired, blue-eyed man child. Howard depicts him as worldly but generous. He attracted people; and when, aged 16, he landed in London, he embraced the dawning of the swinging 60s with alacrity.

Equally at home with the hip, and with those edging on the criminal, Tara became a fashion icon. And when he married wild child Nikki, having two children while still in their teens, his popularity grew. Close to Brian Jones of the Stones, he spent a lot of time with Paul McCartney and Jane Asher. The family home became an epicentre.

“You never knew who was an Animal, who was a Trogg and who was a Pretty Thing,” Nikki told the author.

Tara loved Nikki, but the marriage was doomed from the start. Oonagh, who never approved of the postman’s daughter, saw to that. She gained custody of the two children. So at 21, after perhaps the most glitzy party ever thrown at Luggala, Tara had become unsettled, and less happy in his skin. He died a hero; taking the brunt of the crash to save his new girlfriend.

To Nikki, he epitomised the spirit of the 60. “Try everything once; make the world a little bit better for other people if you can; try not to hurt anyone if you can avoid it; wear pretty clothes and most importantly of all, live your life.”

This isn’t just an excellent portrait of an extraordinary man, it’s a history of swinging London that anyone, with even a passing interest in the 60s will surely savour.

It’s the best account I’ve ever read of lives lived through the psychedelic prism of LSD.