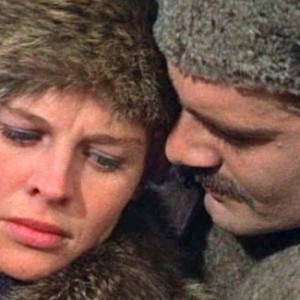 The book and movie, Doctor Zhivago, show the passionate love between Yuri Zhivago and Lara, the nurse for whom he betrays his wife. Set between the Russian revolution and the Second World War, it depicts the horrendous difficulties the starcrossed lovers endured. The book sold in its millions, but few knew that the love story was based on truth.

The character of the enigmatically beautiful Lara — portrayed by Julie Christie in the famous movie — was based on Olga Vsevoldovna Ivinskaya, a literary editor who became the love of Boris Pasternak’s life. Their long affair was just as complex and tormented as the one portrayed in fiction, but Olga’s importance has never been fully explored.

It’s been repressed and belittled both by biographers and by Boris Pasternak’s family. They’ve portrayed her as a temptress who was on the make. This bothered Anna Pasternak, great niece of the famous author, and she determined to put the matter right.

“I feel passionately that if it were not for Olga, not only would Doctor Zhivago never have been completed but it would never have been published,” she writes in Lara, her excellent account of the love story. “Olga Ivinskaya paid an enormous price for loving ‘her Boria’. She became a pawn in a political game. Her story is one of unimaginable courage, loyalty, suffering, tragedy, drama, and loss.”

The two met in 1946 when Boris, at 56, was starting to regret the hasty marriage to his second wife, Zinaida. He was immediately struck with Olga’s beauty. Over 20 years his junior, Olga was smitten. Working for a literary magazine, she revered the poet — as indeed, did most of Russia — and felt instant attraction. Romantically free, she’d had a chequered past, and had been twice widowed, and left with two children.

To say that life for a writer was difficult in Russia was to understate the case. Stalin admired the poet, yet Boris worried, constantly, that he would hear that knock on the door, be arrested, and sent to a camp or executed. Yet he refused to flee.

His parents and sisters had left in 1921, but for Boris, exile would have been worse than suicide. But staying came at huge personal cost.

To keep solvent Boris took on translation work, when the powers that be allowed him to, and this made the progress of the great Russian novel he planned extremely slow. But he persevered with the drafts of Doctor Zhivago, determined to produce a long prose work about his generation and its historical fate. This wasn’t easy, when, having lost faith in the Bolshevik revolution, he’d become a fierce opponent of the Soviet regime.

Olga proved the perfect accomplice. As well as providing the inspiration for Lara, she read the novel in progress, typed drafts, and proved his staunchest supporter. Anna Pasternak is convinced she was his greatest love, yet he refused to leave his family and marry her. And this caused constant friction between the two.

The reason for this obstinacy, the book’s author believes, is his profound sense of guilt. Having already left one wife and son to marry his best friend’s wife, he couldn’t stand the thought of breaking up his new family. And besides, Zinaida was the best possible housekeeper, providing Boris with the perfect, calm environment in which to write. And if Zinaida wasn’t his soulmate, if she didn’t understand his poetry or creative courage, he now had his mistress to provide that solace.

If he wouldn’t commit to marriage, Boris was not uncaring. He supported Olga financially, and became an important father figure to her children, particularly her daughter, Irina, whom he adored. But Olga suffered tenfold.

Appalled at the perceived anti-Soviet propaganda known to lace Pasternak’s novel, the powers that be wanted revenge. Reluctant to arrest and torture such an acclaimed international figure, they decided that Olga would be an obvious substitute.

The scenes of Olga’s imprisonment, as recounted in Lara, make for harrowing reading. Whilst in the Lubyanka, she was constantly interrogated. In the cell she shared with many others, including Trotsky’s daughter, bright lights ensured the inmates suffered sleep deprivation. While there, Olga discovered she was pregnant.

When a guard tells her she can meet Boris, she is delighted, not suspecting a trick. But she’s thrown into the morgue, locked there for several hours. None of the bodies are of Boris, but the strain of the episode caused a miscarriage. Yet she never gave in.

“That so many prisoners weakened under terrible pressures makes Olga’s bravery in the face of persistent interrogation, and while pregnant with her lover’s child, even more impressive,” writes Anna. “If their aim was to build a case against Pasternak, none of her statements could be used against him.”

Frustrated, the three men hearing Olga’s tribunal sentenced her to five years in the labour camps of Potma for the crime of praising Pasternak’s work when he was a writer with anti-establishment opinions.

Even the camp, with its gruelling work and appalling climate, failed to break Olga. She was bullied and intimidated by longer stay prisoners, resentful of her ‘light’ sentence.

Boris, meanwhile, had missed her. And though, for the rest of his life, he vacillated — one moment saying he would give her up, the next that he would commit further, once suggesting a suicide pact — he hung on to his marriage.

Doctor Zhivago, published first in Italy, then in numerous other countries, cemented Boris’s position as an enemy of the Russian state. Rejected by his peers, he was ejected from the Russian writers’ union, and forced to refuse the Nobel prize for literature. His health suffered as much as his finances did, and he spent his last years holed up in his Dacha, visiting Olga each afternoon in her small house nearby.

The state barely registered their one-time hero’s death in 1960. Yet admirers flocked to his funeral. As for Olga, kept away from his deathbed, her troubles were just beginning.

She was arrested and sent back to Potma, and her daughter, Irina, was also taken, in a revenge that the Kremlin had not dared take on Pasternak himself. “If Mrs Ivinskaya could be smeared as a ‘femme fatale who had ‘corrupted’ the ageing author, the government could escape the embarrassment of Doctor Zhivago and reclaim the younger Pasternak as a great Soviet poet.”

She served three-and-a-half years and died aged 83 in Moscow. By then, Doctor Zhivago had been published in Russia, and the Nobel awarded to him posthumously. Yet when Olga requested the return of Boris’s letters and papers, she was refused.

This wonderfully researched and written account shows the parallels between the novel and the real life love story that inspired it.

At times the chronology is a little confusing, but in telling Olga’s story, it shows the effects of the communist regime in an accessible way. And the passion the author has for putting the story right comes shining through.

Published in The Irish Examiner on Saturday, December 10, 2016