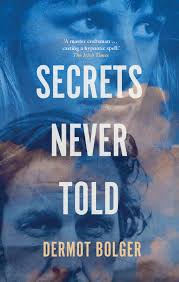 I first became aware of Dermot Bolger in 2000, when I read his seventh novel, Temptation. I was blown away; marvelling at Bolger’s ability to get into the mind of a woman so well. In that, his writing reminded me of the late Brian Moore, and especially of his novel,  I am Mary Dunne. I became an instant Bolger fan, and have loved his work ever since.

That ability – to read a woman’s mind hasn’t left him. In Secrets Never Told, a new collection of Bolger’s short stories, three are told exclusively from a woman’s point of view. And, just as in that earlier novel, he gets the tone absolutely right.

In Supermarket Flowers, a child is run over at a bus-stop outside a grieving widow’s house. Whilst she’s heartbroken for the child’s mother – and does what she can to help – the woman’s daily presence at the scene – and the abundance of cheap, wilting flowers, upset the granddaughters she cares for and strains her patience. Grief, she feels, should be private – and should not inconvenience those, like her, who are only accidentally involved. She voices her complaints, and before long, it’s all-out war!

Evelyn, the widow portrayed in One Seed of Doubt would doubtless echo that widow’s sentiment. When she first visits her husband David’s grave, after months of grieving quietly at home, she’s annoyed to be accosted by a man who, visiting most days, considers himself an expert on graveyard maintenance.

Annoyance turns to alarm when he asks her how she knew the deceased, David, and whether she was acquainted with David’s Hearing of the strange woman who has been visiting her husband’s grave so regularly makes Evelyn question the veracity of the marriage she’d always considered so happy.

Grief, loneliness and remembered abuse infuse this excellent collection. Bolger also examines father son relationships, touching on this in Coming Home, about a teenager, dismissed by the premier English football team who at 15, feels his life is over, and explored in many guises in the longest story, The Keeper of Flanagan’s Hotel – which was formerly published as a central theme in Bolger’s collaborative novel, Finbar’s Hotel, before gaining another life as a BBC radio play.

This story, whilst being a wonderful study of character as it shows the rise and gradual demise of a once great hotel, gives us a glimpses of the history, and the hypocrisies of Irish political and clerical life.

Bolger is at his best when he touches on writers the lives, successes and failures, of Ireland’s literary life. The Lover tells of Casement’s secret life through the eyes of his male lover; Martha’s Streets revolves around a love of Joyce and Ulysses, and What Then? tells of a young poet’s excitement when he encounters a man who once had tea with Yeats. But the two stories that really stood out for me, were The Last Person, and The Rivals.

The Last Person, set at a book launch, portrays a writer who, having found the greatest success with his first novel, seems unable to produce a credible follow up. Finally he does so, but why, when his publishers are happy and the reviews so good, is he so perturbed to see Cillian, a fellow writer and old friend with whom he has long since lost touch? The reason, whilst coming as a surprise twist, makes perfect sense. The rivals also deals with a successful writer’s encounter with a past friend; except, this time, the writer, called to a deathbed because the dying man wants a past row rectified, has absolutely no memory either of James J Hennessy, or the rivalry the other man has spent his life obsessing on.