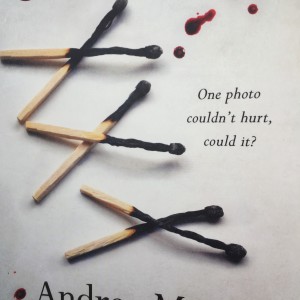 In the late nineties I wrote an article titled ‘mobile manners.’ Commenting on the disturbance caused by phone conversations on the beach, at the theatre, and during a funeral mass, I suggested that some guidelines were needed.

Twenty years on such concerns seem laughable. But with the proliferation of social media, and the prevalence of shared data, should there be some kind of code of conduct to adhere to? Is it okay, for example, to share photos of people without their knowledge or their consent?

It’s an issue tackled by Andrea Mara in her second thriller, One Click. Lauren is in Italy on holiday, and she becomes intrigued by a woman on the beach. Sitting languidly at the edge of the sea, a book dangling from her hand, the young woman seems the picture of idle sophistication. A keen photographer, who loves sharing on her blog, as well as social media, Lauren snaps the woman, and, almost unthinkingly, posts it onto Instagram.

The photo goes viral, and a tweeter asks where the beach is. More insistent tweets follow, requesting the name of the woman in the photo, and soon the messages become threatening.  Lauren confesses her action to the woman, who turns out to be Cleo, an American who has recently moved to Dublin.

Cleo has a dark past, and she thinks she knows who the cyber stalker is, but Lauren isn’t convinced. And when the messages hone-in to her own life, she’s convinced it’s somebody close by. The two keep in touch, as the menace increases.

Lauren has other problems to contend with. Recently separated – her husband now lives with a neighbour – she’s lonely. Indeed, that’s the reason she became attached to Facebook and Twitter in the first place.

“Nobody wants to hear about the loneliness,” she confides to a friend, “because it makes them uncomfortable. So we have to plaster on smiles and pretend we’re fine for fear we’ll push people even further away.”

Then there’s Rebecca – the elder of her two daughters. Moody and difficult, she’s opted to spend after school time with her father, even though she’s disdainful of his shallow new woman, Nadine. And there’s Jonathan, a client who seems more intent on antagonising Lauren than in coming to terms with a recent breakup.

There were times I became impatient with Lauren. She’s had one cyber stalker before the new trouble began, but she’s learned nothing, and is still wildly oversharing. Her decision to talk to a journalist seems unhinged – she asks to be anonymous, but can she trust her interviewer?

Overall this is a well plotted novel, with a lot of red herrings and false leads. I was convinced, many times, that I had guessed the denouement, but the author outsmarted me. Whilst slow in places, the end, when it came was worth the wait. The dramatic revelation shocked me to the core, yet made perfect sense of all that had gone before.

At the close, we see Lauren emotionally battered, yet ready for a fresh start. She’s moved on, and no longer wishes to have her husband back. As a friend points out to her, the dinner parties she thinks she misses, had in reality, bored her stiff. All the talk had been of clean eating and fake tans.

And if she has, finally, learned that negotiating social media needs thoughtful care, then so has the reader. It’s a timely tale, and makes a perfect beach read. If nothing else, it will remind you to post your holiday snaps on social media with extreme caution.

Published in The Irish Examiner on 14th July.