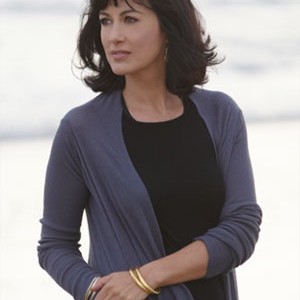 Polly Samson has an extraordinary family history. Her mother, Esther Cheo Ying,  spent time in Barnardos, before becoming a major in Mao’s army. Later, working in China as an interpreter, she met and married a reporter with the daily Worker now Morning Star.

The had two sons, but when it was time to return to England, the British refused to renew his passport, claiming he was a traitor – an accusation later withdrawn. Back in London, Esther pleaded his case, with the help of Lance Samson, a journalist with the paper. They fell in love, and Polly was conceived.

“It was a very complicated time,” says Polly, in Dublin to promote her second novel, The Kindness. “My mother was besotted with my father, but she couldn’t bear the thought of leaving her husband, Alan, who was a nice man and had done nothing wrong. So we moved from East to West constantly for the first four years of my life. Alan just loved the little baby, he didn’t care he wasn’t the father.”

When Lance Samson became ill, and was told he had a fifty per cent chance of surviving surgery, Esther promised him that if he survived she would leave her husband once and for all, and she did.

A solitary child, Polly adored her great uncle. A photographer, he died when Polly was 11; and it was his story, and the reason for his untimely death that caused the germ of an idea for The Kindness.

It’s a sumptuous read; a novel so full of twists that turn back on themselves, yet so skilfully written that the reader is surprised at each revelation, but never shocked. Rather, you feel,  ‘but of course!’

Julian is steeped in academia, studying Milton for a PhD when he falls headlong for Julia, an exotically beautiful married woman. They give up everything to be together, and their happiness is complete when Mira is born. They leave London for the country idyll of Julian’s childhood home; but then the problems start.

The book had echoes for me, of Thomas Hardy, and not just for the turns of fate. But when I suggest to Polly that Julia is a little manipulative, she is appalled.

“I love Julia!” she says. “She’s maybe cowardly, but that’s because she’s not able to tell the truth.”

“I can’t sit staring at a screen. Instead, I walk for miles and miles thinking like Julian. I tramp along the sea front at Brighton with Khan, the German Shepherd  from Battersea Dog’s Home who is the love of my life. I get back, run upstairs and write and write. Then, when I get stuck, I go out and walk again. I walk about ten miles every day.”

Always sure of the principal characters, Polly was surprised by the persistence of one.

“Julian’s ex Katie shouldn’t have been in the book, but she just kept turning up. I thought, go away, I don’t like you! She’s so pushy and she knows what she wants.”

The road to writing, for Polly, has been far from straightforward. She’s been dogged, all her life from a severe lack of confidence.

“I’ve always written,” she says. “I assumed everyone did. I plagued the producer of Blue Peter, sending a new story every week, in the hope of getting a Blue Peter badge, which I, eventually, did.”

She hated school so much, liking just English History and Art, that at 14, bullied and bored she simply refused to attend. Her grandmother, a German Jew, was appalled. She suggested Julia live with her in London, and get a job in publishing.

“She had attended Munich University at the turn of the century, and she’d planned for me to study literature. She sent me a book every week when I was a child. I’d send her back a review. Living with her was a lonely time; there was no TV and I knew nobody except for her, but I was happy. I just read and read and read.”

At 18, McMillan took her on, and having no social life, she was promoted fast, ending up, at 24, as a Director at Jonathan Cape. Then fate intervened. A journalist friend, rooting through Polly’s private writing, took two pieces and had them published in the Observer. There started a career in journalism.

“Then in 1988, I fell in love with the journalist Heathcote  Williams. He and I had a baby, Charlie. I was besotted. I stayed at home and worked for the Observer.”

But it didn’t last. The couple split up, and Polly started working for the Sunday Times as a columnist and reviewer. And it was at this sad time that she met her husband of twenty plus years, David Gilmour, of the Pink Floyd.

“We met through mutual friends. I was the tragic heartbroken single parent, and he was divorced with 4 smallish children. He was having a lovely time with lots of girlfriends, but after two years of sitting together at dinner parties, we thought, ‘Ooh, hang on!’ And from our first real date we were inseparable.”

Early on in the relationship, Polly contracted glandular fever, and that led to ME. She’d be lying, feverish in bed, whilst David would cook her delicacies, in between making demos for a Pink Floyd Album. He’d ask Polly’s advice. She’d mumble out words, and before she knew it, she’d become the lyric writer on seven tracks for The Division Bell.

Her recovery from ME came during the Pink Floyd world tour. Unable to leave the hotel room because of the persistence of fans, she lolled round, ordering room service, and getting loads of much needed sleep.

Home again, there was another twist of fate.

“A friend who had leukaemia came for the weekend. She asked to read some stories I’d written but never shown to a soul. She saw an advertisement for a story competition in the Guardian, and made me promise to send one. I did. I thought no more about it, but months later, a friend congratulated me on being runner up. They’d seen my name in the paper, but no one from the Guardian had let me know!”

Encouraged, she sent the stories to an agent she knew; he sold them and a novel followed. And after a gap of ten years, spent happily bringing up Charlie, and the three children she had with David,; Joe, Gabriel, and Romany, came a second book of short stories, followed by The Kindness.

Since finishing the novel, Polly has been busy writing lyrics for David’s solo album.            “It’s lovely. I’ve just one lyric left to write, and I can’t bear the idea of being done. I sing it first, to get the syllables to fall in the right place. I’ll take the first draft into the studio, and rewrite them as he sings. That’s a gift.”

There has been sadness in recent years. Polly’s father died, and Charlie, after a brush with the law during a student protest ended up in prison. He’s out now and at Cambridge University, and life seems altogether sweet.

Polly is the greatest company. The interview has slipped well over the usual allocated time, but we could have conversed all day. She suggests that when I’m in Brighton, I should join her on a ten mile walk. And you know what? I think I will.

“I’m really happy,” she says, as we get up to leave. I feel confident for the first time in my life. I did not expect to enjoy my fifties, but so far, at 53, I really have. It’s the nicest period of my life so far.”