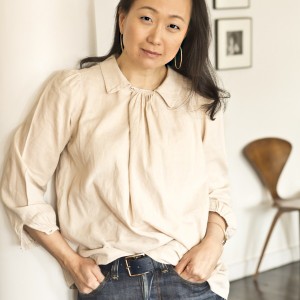 It’s a gloriously sunny May day when I meet Min Jin Lee, and her radiant smile reflects the weather. She’s gorgeous – full of warmth and good humour – and she raves about Dublin, considering it a beautiful romantic city.

“The sun shone on my last visit, too,” she says.

Korean by birth, Lee moved to New York with her family when she was seven. It was tough at the time, as she spoke no English. Her husband, Chris, is half Japanese and half European; the European side a mix of English, French, German and Irish.

“He’s a Duffy!’ says Min, laughing, “and so is my son. That’s why we visited Ireland before.”

Famous for her New York Times bestselling debut, Free Food for Millionaires, which explored the Korean experience of New York, Min’s second novel, Pachinko, follows four generations of a family who leave Korea for Japan. A long, complex book, it wears its research lightly, and is a page-turner. You can sense the author’s love and understanding for all the characters, the good and the flawed. The subject has long been an obsession.

“It’s a compulsion,” she says. And it came about because she felt a need to understand her own heritage. “In order to write fiction, I quit a perfectly good job. I was a corporate lawyer from 1993 to 1995.”

The idea for the novel had been sparked many years before, when Lee was a student at Yale, and heard a story about a schoolboy’s suicide.

“That was in 1989. I’ve been writing it since 1995, and had a draft by 2003.” She put the draft away; wrote a novel that was universally rejected, and then wrote her best-selling debut.

In 2007, when Lee and her son Sam followed Chris to Tokyo where he’d been offered work,  she thought Pachinko was almost finished.

“I thought I’d do some research and have it ready in a year.”

So what went wrong?

“I found Korean Japanese people to interview, and once they started talking I realised I’d got their story wrong. To include all the complexities, I realised I’d need to cover seventy years, and every war in Korea. People thought I was cuckoo. They said, ‘Why would you do this when Korean History is so difficult?’ And it is! The immigration laws change all the time. One year you’re a citizen, the next you are not.

“I interviewed five dozen people. I was like a journalist, spending time with my subjects. I’d follow them at work, and hang out with them; I’d watch how they interacted with others. I only used a fraction of my research; nobody wants wars in fiction; but I had to know it. I learned it and then forgot it.”

The novel opens in Korea in 1911, when a gentle, club footed Korean married a fifteen year old girl. He dies, and when their only child, Sunja, becomes pregnant by Hansu, a married yakuza, the family face ruin, until Isak, a Christian minister who offers to marry Sunja and transport her to Japan. The novel follows the family as they do whatever it takes to survive.

It’s a story of the resilience of women; the importance of family; and the difficulties of living in a country that doesn’t accept you. And in each generation, the men find different ways to adapt.

“Across cultures men want to protect their women and take care of their children, but if you are an oppressed minority and the larger world doesn’t allow you to, what can you do? Every male character in this book asks the question, ‘How will I become a man?”

They try various ways; some successful; others not so. It’s Noah, the son with the most promise, whose story touched me the most. He re-invents himself as pure Japanese; cutting off his birth family, and keeping his real identity a secret from his wife and children in the process.

“Every Korean person I interviewed had someone in their family who was hiding; or knew someone who was, and that person could not be approached because it would blow their cover.”

Throughout all this, the wealthy Hansu  watches secretly over Sunja and her family, protecting and helping them in myriad ways.

“I think he loved her deeply. He couldn’t marry her, but he was so committed to her and there is something really romantic about that. When I was interviewing all those people, I was struck by their stories of the one who got away. One said, ‘I loved her, but her father wouldn’t let her see me.’ I heard that kind of story over and over again, and when I asked what did she look like, it was not about physicality; it was about how that person accepted them. Or they’d say, ‘her beautiful smile made me happy.” 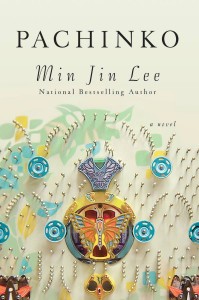 The attitude towards the Korean Japanese is still the same today.

“Even if things are going well for them, they’re always waiting for someone to say that they’re aggressive or violent, deceitful or manipulative. People said terrible things to me!”

Back in New York, she started penning the book again.

“I wrote it in a splurge from 2011 until 2016.” She was doing some journalism too, and was a columnist for a time. “And life got in the way. My father was ill, and I don’t have help. There’s stuff to do at home, like cooking and cleaning. But it was so embarrassing to work on the book for such a long time. People stopped asking about it. It felt like a sentence. When it sold I was so relieved.”

She can barely believe it’s success.

“I didn’t expect it! I didn’t think I’d be sitting in a lovely hotel talking to you!”

There are references to George Eliot’s Middlemarch in the book – Noah studies it – and it occurs to me that Pachinko is similar in its scope and sociological insight. Was that in her mind?

“More than anything! It’s my favourite book. I always felt that Eliot understood people. She observed them and cared about everybody and the interactions were really great.  Young people don’t read her, and that’s a shame. They’re missing so much, but the reason is that Eliot’s sentences are complicated. I wanted my prose to be as clear as possible. I wanted my friends who are very clever to read it, but also people who aren’t educated, and don’t read very well. I wanted the whole spectrum. That’s why the book took so long to write.”

The third in this trilogy about Koreans will focus on their education around the world.

“I’ll get it done because I’m a finisher. I will do it, and I don’t feel the anxiety I felt with this book. I had nightmares about Pachinko because I thought it would make Korean Japanese people angry. And they have been so badly treated that I did not want to treat them badly too.”

With the focus so strongly on that one group, Lee was amazed when readers from South Africa and Israel identified with the novel.

“I was so specific about Koreans, but they said, ‘so much of what happened to my mother, or my grandmother is in the book.’”

Lee is so thrilled at the universally positive reaction from the Korean Japanese community, that she carries their letters around with her.

“At an event in New York recently, a woman came to me and said, ‘I bought your book in order to criticise it. I knew you weren’t Korean Japanese, so what could you possibly know? And then I  read it.’ She said, ‘I couldn’t believe that you got everything in my family right. How did you know?’”