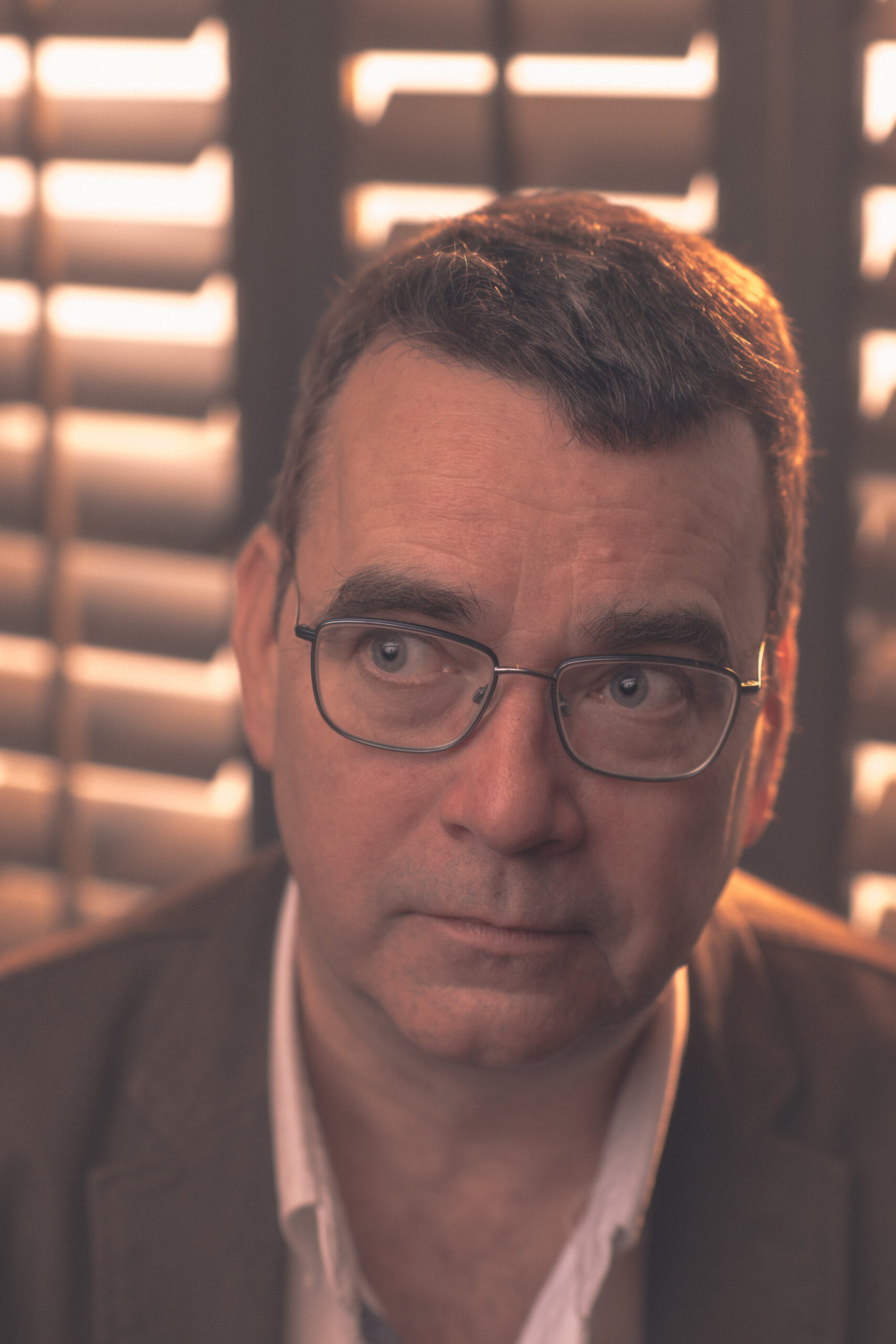 The writer, Mick Herron has been riding out the pandemic in Oxford, where he lives quietly with his partner. Life is little changed, since he habitually spends his writing days alone, and his next novel is well on the way to being completed.

He has taken up a fitness regime, thanks to Joe Wicks, a man he describes as a national hero, and has the excitement of the current filming of his spy series to occupy his mind, with Gary Olden plying the part of antihero Jackson Lamb.

“I haven’t had it as hard as other people,” he says, “those sick, or whose livelihood has been destroyed. But one thing I have missed, more than I expected, is attending literary festivals.” He names Ireland as a favourite destination. “I’m always amazed at the level of reader engagement in Ireland. It’s wonderful!”

We’re talking over the phone about Slough House, the seventh thriller in a series starring Jackson Lamb about a group of spies who, side-lined from the Front Desk of Britain’s Secret Service, live out their days employed, but in the cold. But when these ‘slow horses,’ start suffering a series of accidents and learn that records of their existence have been deleted, they wonder if they have now become a target.

I’d not read the previous six novels, and, although it took a chapter or two to get to know the eccentric Jackson Lamb and his band of underlings, I was soon swept into their world, loving the political overtones, the satire, scope, and sheer cleverness of this look at pre-pandemic London.

The writing is glorious – with endless, often politically incorrect one-liners, and the situations described feel utterly contemporary. A speech made by the leader of ‘a coalition of the furious,’ urging his followers to restrain from street violence and go home, mirrored, to an uncanny extent, the one made by President Trump recently after the storming of the Capitol building.

“That was written a year ago,” says Herron. “I don’t have a crystal ball but if I’m writing about this kind of politics, there is always going to be something that will resonate in a year’s time.”

Reading the novel, I got a sense that Herron gained enjoyment from writing about the various shenanigans, and he confirms this.

“Very much so, yes. I don’t always find it easy,” he says. “There are good and bad days, but I enjoy making the characters go through things and seeing how they respond to the situations I put them through.”

Born in 1963, in Newcastle upon Tyne, Herron has always wanted to write. He started with verse, and after reading English as Balliol College, Oxford University, he settled to a career as a subeditor – living in Oxford but working in London.

He was still working in 2003, on the publication of his first novel in a series of four, based on an Oxford based private detective, and didn’t leave the day job until 2017, when he’d penned a further eight novels. The transition wasn’t altogether easy.

“I was wary of it. Writing fulltime was an opportunity I couldn’t pass over, but I didn’t know what it would be like,” he says. “Would I become dissocialised? One thing I realised when I gave up work, was that during the day, and on my couple of hours on the train, at least part of my brain had been thinking about the writing I was going to be doing when I got home. I’d been mulling it over during the working day, so when I got home it was a matter of putting what was in my head onto the screen.

“Now, I have to incorporate that mulling over time into the day, when I’m not doing anything else. It took quite a while to get used to that. Initially I thought I ought to be able to write twice or three times as much as before, because I had the time. I wrote a lot more and ended up deleting most of it. I had to adjust.”

Now he spends hours of each day lying on the sofa, thinking, and drinking coffee.

“It’s not a difficult way of life,” he says, laughing.”

The books have enjoyed enormous success. Described, by the Mail on Sunday as the new king of the spy thriller, Herron has won two CWA Dagger Awards. He was shortlisted 8 times and has received a raft of other short listings. Critics praise his ability to chronical and satirise modern Britain.

He has been compared to John Le Carré, but feels his work is more redolent of early Len Deighton.

“He was writing very funny novels with a spy angle, and that had not been done before.”

The Slough House series starting with Slow Horses, came from an accumulation of ideas.

“I knew I didn’t have the background knowledge to write convincingly about spy work and the secret service, and I wanted to write about people who were shut out from that, but nevertheless involved.

“I’m sure 90pc of spying is electronic surveillance these days”, he says, “and I don’t have the technical knowhow. My characters deal with a lack of equipment, and low-grade tasks carried out on a human level, and that’s what I wanted to write about.”

Herron doesn’t do much planning.

“I wish I could more adequately plan,” he says. “I have a vague notion of what I am up to. I know what scenes I’m writing, and which characters are involved, but the planning tends to happen on the page. Often, what might appear as a clever plot twist is really when I’ve written myself into a corner and need to get myself out of it.”

Some of the humour is planned; Herron writes down snippets that amuse him and tries to find a place to slip them in; but most of it comes from the dialogue, and especially from the acerbic wit of    Lamb, whose quips include, ‘Bit like seeking Prince Andrew’s advice on choosing your friends.’ And ‘Like calling Farage a statesman.”

Having written his characters over seven books, he knows and loves them well. But it’s essential to kill off a major ‘slow horse’ now and then, so that every time one of them is in a spot of danger, the reader will think, this could be it for them.

Many writers have expressed difficulty in working over lockdown, because they can’t predict what the world will look like afterwards, but Herron hasn’t let this slow his output.

“I’m not specific about time in my current book, but I’m assuming it’s roughly 2022 when we will be dealing with the fallout. I won’t be writing about Covid,” he says, “but I will be writing about what people experienced during it.  It will be the social background.”

Herron has also written six stand-alone novels, and he plans another one. But he doesn’t intend to leave Lamb’s world anytime soon.

“I like the characters,” he says. “I’m fold of them all, even the unpleasant ones.  I like the world I am writing about. It gives me the opportunity to write about political events in a way I probably wouldn’t in another kind of novel.

“I find the action scenes hard; they take me a long time. I write a lot, then strip the words out to give the impression of speed to the reader.”

Published in The Irish Examiner on 20th March