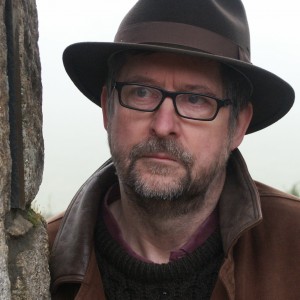 Back in 1979, Michael Russell lived in Leeds. He stayed for eleven years, first farming and writing, and then working for Yorkshire television. It was the time when Peter Sutcliffe, better known as the Yorkshire Ripper, murdered 13 women and attempted to kill seven more. Michael well remembers the atmosphere of fear in the city.

“One of the latest victims was killed a couple of hundred yards from where I was living,” he says, when we meet, outside, at a coffee shop on an overcast Monday morning.

“I still remember the sense of intensity that built up; women were genuinely frightened of going home. There were times, at night, when I crossed the road because a woman was coming towards me. You sensed that she was looking at you, and wondering, am I safe?”

He remembers, too, the, unspoken, sense that when the ripper was killing prostitutes, it didn’t require as much attention as when he killed an ‘ordinary’ woman.

The memory surfaced when he was researching, The City under Siege, his 6th wartime thriller featuring Detective Stefan Gillespie. He read of a series of murders being carried out in the blackout by a British soldier. And the idea started to take hold.

The novel opens in 1939. A gay priest is murdered in County Kildare. When another, identical killing happens in Soho, and is linked to a series of gay murders throughout England, Stefan is sent to investigate. And when the murderer, believed to be a British soldier, strikes in Malta, Stefan goes there. Why aren’t the authorities more concerned?

Stefan’s life, in this latest novel, is somewhat complicated. He distrusts his colleagues at Dublin Castle, and has domestic problems too. His son, Tom, living with Stefan’s deceased wife’s parents, has reached an awkward age. He’s turning away from the Church to his grandparent’s distress.

This scenario was stolen from Michael’s life. Stefan is protestant, as was Michael’s father.

“I was sent to a protestant primary school, but when I passed my eleven plus for Tiffins, a non-religious grammar school, the priest rolled up and said, ‘We think he should go to a Catholic Grammar school.’ My mother was young; she was nineteen when I was born, but she told the priest where to go! She’d been a mass goer all her life, but she’s never been in a church again, except for weddings.”

Micheál MacLiammóir the flamboyant English born actor/ playwright who co-founded the Gate Theatre in Dublin, plays a key role in this novel.

“He had a walk on part in books 1, 2, and 3, but I always wanted to write something that involved him. When Ireland was in a monotone of society, with only one way of seeing things, few people attempted to step outside that. The Gate was a tiny enclave – an alternative Ireland that was, somehow, tolerated.”

This wonderfully atmospheric novel would convert well to the screen. And that’s not surprising when you consider Michael’s previous work in TV – which included writing scripts for numerous series including Midsomer Murders and a Touch of Frost.

Born in 1951, and brought up near London, Michael became a reader at seven after contracting polio.

“It was the school sports day,” he says. “I was in the egg and spoon race and I collapsed halfway along the course, and that’s when they found out. I was put in an isolation hospital in Kingston. I was there for a couple of months. There was no TV in my room; my parents could only visit once a day, so I read and read and read. And I never stopped!”

At 14, starting to write poetry, he decided to become a writer of some description, and that has never changed. But it wasn’t a simple career trajectory. Leaving Oxford University, answering an advert in The Times or Telegraph, Michael secured a job as a press officer for a large company who made plastics, rubber and medical equipment. He lasted nine months, then, after strange goings on in the company, he was given a choice. He could have a job, or he could leave with a year’s salary. Wanting more time for creative work, he chose the latter.

Meanwhile his girlfriend had been offered a job in North Devon. The couple moved there, and Michael combined farming, on her parent’s smallholding, with writing.

“I spent three of the happiest years of my life there,” he says.

He wrote an Arthurian novel before turning to radio plays. His first, based on a true story about Mayer, a theologian, close to Rome, who made a questionable promise to help out the Nazis, received a 10 page letter from the head of BBC’s Script Unit saying it was one of the most offensive pieces of work he had seen in his 25 years with the broadcaster. His second, a rather gentler story about a conker championship did rather better.

“They said they would make it for a Play for Today, but then they ran out of money.”

That might have come as a blow, but three opportunities came along simultaneously. Michael gained an agent, and two job offers arrived.

“The BBC Script unit offered me a six months attachment,” he says, “And Yorkshire TV offered me a job as a script editor.”

Choosing Yorkshire TV, and using his recent farming experience, he wrote for Emmerdale Farm. He was at the station for ten years but became disenchanted when his promotion to producer meant he was no longer writing for a living.

That’s when fate brought him over to Ireland.

“My first job after Yorkshire TV, was All Creatures Great and Small. The scriptwriter on that, Joy, became my wife. She had been working with the BBC on a new project – Ballykissangel, and she was going to be in Ireland for six months.”

Michael came here too; Joy was asked to do a second series; they put Joy’s London property on the market and moved into a house on an estate in Baltinglass, County Wicklow.  But in the July, Joy was killed in a car crash on her way back from the set in Avoca.

Lost, alone in the house except for a big dog, Michael went to England and stayed with various friends, but found the experience, and his friend’s concern exhausting.

“When I got back, I was relieved to be on my own. I thought I will stay until I decide what to do. And one day, when I’d been here for 2 ½ years, flying into Dublin after a work meeting, I remember, as the plane touched down, I thought, this is home. I’m not going back. 25 years, and I’m still here!”

Michael has driven across the mountains to meet me In Laragh, near Glendalough. It’s a stunning spot. Cyclists and hillwalkers abound, but there’s a constant stream of noisy traffic disturbing the peace.

Married again, Michael has five children, including three stepchildren. Making a good living from scriptwriting, he turned to novel writing after an idea he had for a series failed to make the cut. This was shortly after a friend of his, who was always talking about the novel he was writing, died suddenly before doing so.

“I didn’t want to be that guy,” says Michael.

He’s enjoyed the journey through the wartime years with Stefan Gillespie. And though he would like to write something else, and has various ideas nagging at him, he’s keen to see his detective through to the end of the second world war.

“That will be three, or maybe four more books,” he says. “I want to get him back to Berlin when it’s in ruins. But there will still be the small Irish community.”

Published in The Irish Examiner on 12th September