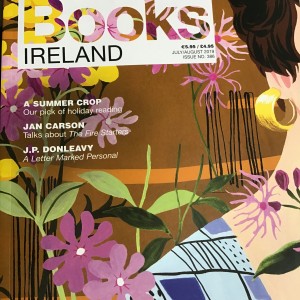 The first rule of author interviewing, is don’t, ever, be late. Especially if the writer has flown in and has a packed-out schedule for the day. But once, when I was due to meet the duo representing The Mind Gym; on a book, titled ‘Give me Time,’ my own time keeping went seriously awry.

I don’t remember what had gone wrong that day in 2006; whether it was the traffic to blame, or the trams. But I will never forget that sick feeling when I realised I would arrive for the appointment at the Merrion Hotel over fifteen minutes late.

Margaret Daly, for she was the publicist, met me with a smile, a raised eyebrow, and a large glass of red wine. “Relax,” she said. “It’s fine. I’ve rejigged the schedule. They’re doing a phone interview, and they don’t know there’s been a change.”

That was Margaret all over. And that’s just my story, or my one of many. From the comments from those who knew her, hearing of her shockingly sudden death in April, it’s plain that all of us have a favoured memory or three. Everyone remembers her for her constant smoking, her tote bags crammed full with an everlasting supply of proofs, and her wicked humour. Margaret was loved. She was fun. It’s impossible to say her name without smiling.

Margaret worked for Poolbeg for some years, but I met her in the early noughties, when she’d moved on to Little Brown, and I saw her constantly until her retirement, by which time she was with Hachette Ireland.

I don’t think my postman much liked Margaret. Her parcels were too big for our box, and he’d stagger to the door to hand over a stash of books that were either bursting out of the paper, or had been re-bagged by the post-office.

A day or two later, she’d ring. You’d chat for ten or fifteen minutes, and only then would she tell you who was coming to Dublin, and when. If you weren’t in, she’d leave a long rambling message, which would end, ‘This is Margaret.’

Sometimes, she’d ring on the morning of an interview to tell you how lovely the author was. How you’d adore them, and “Would you like to talk to them over some lunch.” You’d arrive, and she’d tell the writer, in front of you, that you were the best; a true professional, so the interview started in a haze of goodwill.

The hotels loved her. (She used the Shelbourne for years, then moved over to the Merrion.) She’d hand out books to any waitress or receptionist who expressed an interest, and the photographers were never forgotten. They’d be offered coffee, along with a signed copy.

She made sure to introduce you to journalists from other papers, and when you reached home, there’d be another call, telling you that the author had liked you; had said it was a great interview. You knew that she said that to everyone, but you still felt a glow.

She gave the impression of being mild, and a little bit scatty, but appearances can be deceptive. Margaret was the consummate professional. She didn’t discriminate. She treated the disorganised student writer with the same deference as the star arts journalist of the day.

I never heard her say anything bad about anyone in the business – until she had retired. And it astounded me, hearing her talk of the divas, recounting stories of appalling rudeness, and high handedness, because when I’d interviewed those same people, she’d kept smiling, and never hinted that they were anything less than charming. Her death marks the end of an era.