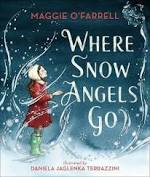 Some years ago, Maggie O’Farrell was in the back of an ambulance with her middle child – who – since birth, has suffered from extreme, sometimes life-threatening, allergic reactions.

“That night she was very sick and was very frightened. Her teeth were chattering. And she said, ‘Why am I so cold?’”

In order to explain to her daughter, without scaring her further, Maggie transposed her answer into metaphor.

“I said, ‘it’s your snow angel. He is flapping his wings around you – that is why you are cold. But you’re ok. He’s here to look after you.’”

The Snow Angel became a character in the stories Maggie told her children, and when she was in Ireland on a book tour, she wrote some stories down, and posted them to her children, every day she was away.

“When I got home they wanted me to read the story in one go, and I expanded it into a proper narrative.”

O’Farrell was also sick when she was young and spent a lot of time in hospital. as a child. She once heard a nurse telling someone to be quiet, because a child was close to death. She wondered who that was, before realising the nurse was referring to her.

“It never occurred to me to publish it, or show it to the wider world, but I was with my editor in London when I posted a story, and she said, ‘Are your children keeping the letters?’ I’d no idea, but she’d made me think it might have some value, and I sent the book to my agent. She sent it out, saying, ‘We’ll see what publishers say.’”

Snapping it up, Walker books paired Maggie with the illustrator, Daniela Jaglenka Terrazzini, and the resulting book, Where Snow Angels Go, is so beautifully written, illustrated and produced, that it is sure to become an instant classic.

The book tells the story of Sylvie – a girl who wakes to find a snow angel in her room. He says he’s there to save her life. Has something magical happened? Could he be the angel she made in the snow the winter before? Through the story O’Farrell captures the fragility of life, and the courage of the little girl.

O’Farrell is famous for her adult fiction. She has won numerous awards for her nine novels – the latest, Hamnet recently won this year’s woman’s prize for fiction. But she never assumed she would have the skills to write for children.

“It’s not necessarily a transferable skill,” she says. “And it’s very different. It’s the first time I’ve ever collaborated with anybody – and with Daniella it was a perfect arranged marriage. She has deep roots in European folklore, yet in one way is very modern. I loved her illustrations.

“Obviously, writing for children you have to develop a different way of creating narrative, and I had to carve out gaps and hollows to allow Daniella to take the reins. There are things in the pictures that children can see but that aren’t in the words. You can see, for example, that the little dog knows about the angel as well as Sylvie, but it’s never mentioned in the text.”

The advantage in writing for children, she says, is that they give honest and instant feedback.                “If you’re reading to them and the narrative is sagging, they generally stop listening and go away to do something else.”

O’Farrell’s most recent novel, Hamnet – which also focuses on the fragility of life – fictionalises the life and death, at 11, of Shakespeare’s only son. He died from the pestilence that was sweeping the world at the time, and in some kind of serendipity, the novel was released in March, in tandem with the first lockdown.

The novel examined the pestilence, describing how the plague could kill someone heathy in 24 hours – and how it spread. O’Farrell charts the journey of contagion from Alexandria all the way to Stratford on Avon.

“I had to look at Elizabethan trade routes and, and how the fleas worked and what they looked like,” she says. “Writing that, I remember wondering what the plague felt like. Back then, it seemed such a distant concept.”

And whilst Covid is not as severe as the Black Death; that killed a quarter of the world’s population, she thinks it will change us, as a population.

“We’re going to lose that sense of ourselves as invulnerable,” she says, “and learn to inhabit the globe in a different way.”

Born in Northern Ireland, brought up in Wales and Scotland, O’Farrell is married to the novelist William Sutcliffe whom she met at Cambridge University. She’s speaking to me from their home in Edinburgh. When I ask if it’s been tough writing in lockdown she says she simply loves writing.

Lockdown was tough – because with home schooling to contend with, the house was always full. And there was one morning, when Sutcliffe was doing the schooling, that she craved some peace and quiet.

“I was trying to write, and people kept belting in saying, ‘I need a jam jar,’ or ‘I need a black pen.’ I went and hid in my daughter’s Wendy house, with the cat, and it was absolutely brilliant. It was just the laptop, the cat and me for about two hours.”

Most of O’Farrell’s novels touch on illness and death – and that’s not so surprising. Very sick as a child, her memoir, I am, I am, I am, describes seventeen brushes with death experienced by her or her children.

“It was actually more than 17,” she says, ‘but others were repetitious or didn’t seem to fit.”

She claims that we all have more near-death experiences than we like to remember, and illustrates her claim, by recounting the strange things that happened when she took her memoir on tour.

“It takes two hands to count the number of people in the audience who fainted,” she says, “And that has never happened with any other book. In Toronto a 6ft 7inch hockey played fell like a tree, dragging a table-cloth full of wine glasses with him. And in Edinburgh someone fainted at the top of the stairs and thumped his way all the way down. It was strange. I think it’s because people remember things that happened to them and feel overwhelmed.”

O’Farrell is currently writing a novel, and another children’s book.

“I have to. Where Snow Angels Go is dedicated to one of my daughters, and the other one, naturally and fairly, wants one dedicated to her.”

And meanwhile, her hope for Where the Snow Angels Go is that parents will read it to their children, as well as letting them read on themselves.

“It’s a trend for parents to stop reading to their children as soon as they can read for themselves, but I think it’s good to carry on for as long as you can. There is nothing so magical as sharing a strong narrative with your children. I still read to my 11-year-old every day. She reads ahead, but I’m keeping up with the magical world she is in, and we can share the narrative together.”

Published in The Irish Examiner on 19th December.