Posted by Sue Leonard on Sunday 3rd May 2020 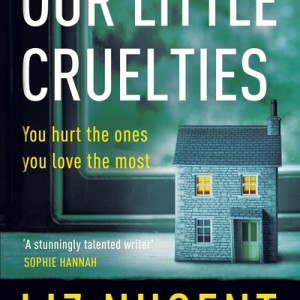 Ever since she stormed onto the literary scene in 2014, Liz Nugent has been famous for her devastating first lines. And with her latest, fourth novel, Our Little Cruelties, she has penned her most intriguing yet explosive one yet.

‘All three of the Drumm brothers were at the funeral,’ the novel starts, ‘although one of us was in a coffin.’

Set between the late seventies and the recent past, this deliciously dark novel switches between the voices of brothers Will, Brian and Luke – rivals who are constantly at odds as they compete for their mother’s love.

Will is the actresses’ undoubted favourite, and, perhaps as a result of her unthinking bias, he acts like an only child, and grows into a narcissistic film producer. But the younger brothers, Brian, and the popstar Luke, aren’t averse to small cruelties of their own.

“I think they are all bad in their different levels,” says Liz, as we chat over the phone during the first weeks of the Corona Virus lockdown. “They’re all treacherous. Brian is manipulative and ready to take advantage, and even Luke is concerned always for himself. But on a moralistic level William is definitely the worst.”

Liz has always been brilliant at structure and plot, and this novel, which in my mind is her best yet, flows flawlessly in spite of the different timelines and narrative voices.

“It was written exactly as it reads,” Liz says, “except for the first two chapters of Brian’s that I swapped around. But I’m not a planner. The book just evolved gradually.”

She picked the timeline of her own life.

“It was fun to look back at what was happening each year; obviously events like 9.11 could not be ignored – and it was likely that someone like Luke would be holed up somewhere; I wondered what his reaction would be to it. And I thought, if he was in one of his manic phases he could think it was something beautiful.”

The scenes based in the world of the theatre and film feel utterly authentic, and that’s not so surprising when you consider Nugent’s background. Discovering a love for theatre when she took a course at the Gaiety School of Acting, she became an Assistant Stage Manager and worked for some time at the Gate Theatre. After a year working freelance in Kilkenny, she became a Stage Manager and worked on Riverdance, touring internationally.

“That was the pinnacle,” she says.

Since then she has worked in RTE as a story creative on Fair City – but thanks to the success of her debut, Unravelling Oliver, and her subsequent novels, Lying in Wait and Skin Deep, Nugent now has the luxury of writing fulltime.

The narrative feels bang up to date, and includes mention of the MeToo movement, through the relationships Will has with various women.

“I wanted to be clear that with Will, this was a grey area. He is not a rapist. He never raped anyone, but he used his position and abused his power to manipulate women into bed.”

Although the brothers are all pretty despicable, they have a likeable side too – and are intriguingly complex, yet Liz has never studied psychology. She never names Luke’s condition, and this, she says, is quite deliberate.

“The names for these conditions change over the years; nobody was bipolar twenty years ago.  My dad suffered from mental health for his entire life, and the amount of labels put on him was extraordinary.

“He wasn’t the inspiration for Luke; he never had a psychotic episode, but he did crazy things. He sold my mother’s car and bought an E Type Jaguar for himself – a car with no seats in it, and he had six children. And he’s always been incredibly impatient. What he wants he wants now!”

She did do a great deal of research. She spoke to people who had attended the Oscars, for example, and who had been to the Cannes Film Festival. And as a ghost-writer, I can vouch for the veracity around Kim – a ghost-writer tasked with writing Luke’s memoir; Nugent has nailed the process.

Liz is a lovely person. She’s fabulous fun, and is a great friend and support to all the Irish writers. She namechecks her friend Jane Casey in Our Little Cruelties, and her acknowledgments run into four pages. So where does all the darkness come from?

“I’m absolutely fascinated by people and what motivates them,” she says, “And I’m especially interested in people who do bad things.”

Unravelling Oliver was inspired by Freddy Montgomery, the antihero in John Banville’s Book of Evidence. Liz worked on a stage production of it whilst at the Gate Theatre, and the character stayed in her mind.

Banville’s inspiration came from the case of murderer Malcolm McArthur, and last year, at The Hinterland Festival Liz had an encounter with him. He approached Liz and Jane Casey, asking Jane whether she met real criminals, before declaring that he, himself, was one.

Nugent is one of the hardest working writers I’ve ever met. And its difficult for her, because a disability sustained from a fall as a child, makes writing a slow process. Late last year she sustained a knee injury and spent three months in hospital on the strongest of painkillers. She was well on the way to recovery when the lockdown happened, but without physiotherapy is in a great deal of pain.

“I’m back on one crutch again,” she says, “But I got an injection from my GP recently, and now I’m able to do my hour of exercises again.”

And she’s still working. Having completed her edits for the American edition of the novel, she’s writing a play to commission.

“I hope to finish that by the end of April, and then, I hope, I will start on something new.”

Does being a published author feel as good as Liz imagined it would, back in 2014, when Unravelling Oliver first hit the shelves?

“I thought there would be a lot more wining and dining,” she says, ruefully. “I thought you would have lunch with your publisher and your editor would take you to dinner, and there would be lots of glitzy parties.” She pauses. “There is, of course the annual An Post Irish Book Awards.  That’s a red-carpet televised event.” (Liz has collected four awards at this – which was formerly sponsored by Bord Gais.)

With praise from the likes of Sebastian Barry, Joseph O’Connor, Val McDermid and Marian Keyes, Our Little Cruelties confirms Liz Nugent as the Queen of Irish crime writing. Is success sweet?

“No,” she says. “At the end of the day its you and the laptop against the world. I have six trophies in front of me and that’s very nice. I’m not denigrating them but they’re not cash prizes and I still have the same bills as everyone else. I get catapulted across the world, but that’s all work related. It looks glamorous but you grow to hate airports. I’m extremely fortunate that I can write fulltime, but I don’t live a life of luxury.”

Published in The Irish Examiner on May 2nd.