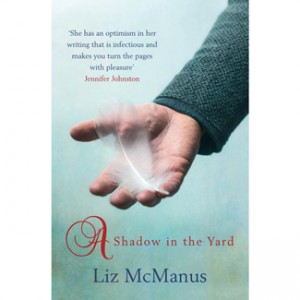 “Retirement is blissful, it’s like being young again. “It was about civil rights, not nationalism”

LIZ MCMANUS wrote her debut novel, Acts of Subversion, in the 1980s. Well-received, it was shortlisted for the Aer Lingus/Irish Times award.

She had already won prizes for her short fiction — including a Listowel prize and a Hennessy Award, but she had no confidence. She could not write a second book.

Living in Bray, a mother of four children, McManus had given up working as an architect, but she wasn’t idle. A member of Sinn Féin, the Workers’ Party, she was busy promoting women’s rights. It was an unusual choice of party for a middle-class doctor’s wife.

“We were very serious,” she says. “I’d been in the Labour Party, when we lived in Derry, but when we moved south again, the Irish Labour Party was going into coalition and I couldn’t agree with that.

Sinn Féin, the Workers’ Party had broken away from the Provos, so I decided to join them. I had no truck with the nationalist ideology at all, and saw myself very much as a socialist.”

McManus taught writing, wrote a column for the Sunday Tribune, and became very close friends with other Bray mothers.

“When everyone was at home, there’s great strength in that friendship. We called ourselves the Bray Women’s Group. We were all pushing buggies around, demanding the right to get into banks and pubs with our buggies,” McManus says.

She became a county councillor, and then, in 1992, she joined Dáil Éireann as a Democratic Left deputy.

For 19 years, she was a passionate and effective TD. She served as a minister of State in the ‘rainbow coalition’, and rose to deputy leader of the Labour Party.

When the 2011 election was called, and she announced her retirement, the party and her supporters alike were shocked and disappointed.

Why did she retire?

“I couldn’t do it anymore,” she says.

“You can’t keep on forever doing a really demanding job. As a TD, I drove myself very hard. And I didn’t want to end up doing the job badly. There’s no harm getting off the stage while people are still clapping.

“I’m still a member of the Labour Party, and I still go to meetings, but I try not to be saying, ‘Why don’t you …’ I’m there to support, but not to criticise.”

It wasn’t just a fear of outstaying her welcome. Her marriage over, McManus had a new partner, Sean Lenihan, and she wanted to spend more time with him and with her family, including her grandchildren.

And her retirement freed her up to write again. So, she applied to, and was accepted onto, the Trinity College Dublin creative-writing MPhil.

And that’s how she wrote her superb second novel, A Shadow in the Yard.

Set in 1970, in Donegal and Derry, as trouble had started to brew, it concerns Rosaleen, a one-time architect, now mum-of-two, who feels trapped in a predictable marriage.

Why, though, when she didn’t have strong political affiliations, did Rosaleen end up a victim of violence?

“That is what interested me,” says McManus. “All the books out now concern either members of the IRA or Paramilitaries doing terrible things, or British soldiers — always the participants, and I wanted to write about the women who ended up being destroyed in a situation in which they had no part.”

It’s not that she set out to write a political book. But having attended University College Dublin, and having lived in Derry in 1969, the characters just came to her. But she does feel strongly about the North.

“I feel that the whole peace process is dependent on our collective amnesia. We shouldn’t walk away from the situation, but, along with the amnesia, certain parties are rewriting history, saying that what happened in the North was a war of liberation.

“It was anything but! It was a sordid, squalid, sectarian war, where a lot of people died who should not have died and in terrible conditions.

“When I went to Derry, there was no question of it being a nationalist project or unity of the country; it was about civil rights. And had the civil-rights movement been allowed to keep going, I have no doubt the situation would have been vastly improved without the mayhem.”

For all the political overtones, A Shadow in the Yard is also about the consequences for women of not having contraception.

“That fear of pregnancy was a big thing. Rosaleen’s friend, Laura, is the classic case. She gets ‘caught’, gets married, and feels trapped.

“I was doing a clinic in a rural part of Wicklow in 1992, and one of the first constituents to come in was a woman who’d had a contraceptive coil fitted 15 years before, who had never had it checked. She didn’t know who to go to, apart from me.

“That woman taught me more about the deficiencies of the health service than did anyone else,” McManus says.

The second half of A Shadow in the Yard flips forward to 1998, in Dublin, to show the reader how Rosaleen’s family have fared without her.

Life for her children, Aoife and Conor, has been far from easy, and neither enjoys a conventional life.

“That aspect has always fascinated me,” says McManus. “That idea of rupture, and what is left after the rupture; what is the emotional damage and overhang?”

Then, she says: “All this is justifying after the fact. The truth is I hadn’t a clue what I was doing. I knew I had a woman, and I knew what her background was, but the people took over. It’s a weird thing. I’m beginning to write my next book and I find these people crowding into my head again.”

The course at Trinity, McManus says, was bliss.

“The whole set-up was terrific, but the highlight was when {American novelist} Richard Ford came over for a week. He didn’t critique — he just talked and we could ask questions. I was having difficulty with the in-between bits. I asked him, ‘How do you stop being boring?’

“He said, ‘Look, something has to happen.’ It had never struck me before that you have to construct the movement between events in a way that is actually alive. That made so much difference to me,” she says.

McManus is enjoying life after politics. We’re talking in her home office, in a house once lived in by James Joyce, which overlooks Bray beach, and Bray Head beyond.

Earlier, she had shown me the dining room, where the famous Christmas dinner scene in Portrait of an Artist as a Young Man was set.

“Retirement is blissful,” McManus says. “It’s like being young again. You are free to make choices. I do a course every two months; at the moment, it’s the literature of 1916, and once a week Sean and I go on what we call our old-folks outing — to Kilmainham, or wherever. I mind my youngest grandson once a week. It’s lovely to have the time to do that.”

Fascinated by every aspect of literature, McManus is now chair of The Irish Writing Centre — an organisation for which she has huge respect. What about the writing? Will she continue that for as long as she is able?

“I may, at one point, decide I can’t do it as well as I want to. If that happens, I will give up. I don’t want to outstay my welcome,” she says.

If she can continue to write novels as mesmerising and compelling as A Shadow in the Yard, there’s absolutely no danger of that!