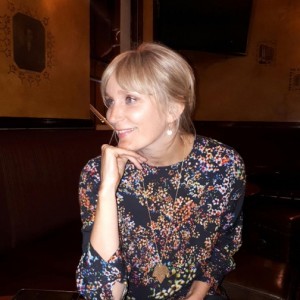 Around eight years ago Lisa Harding gave up acting. She had been a successful ingenue – playing Juliette in London, where she gained substantial roles in plays by Tennessee Williams. But later, the parts she was offered did little to inspire her.

“There was a lot of living out of suitcases,” she says, when we catch up via Zoom.  “I performed in a couple of new plays, and thought, I can inhabit these characters with my own words better – and that’s when I started to write.”

Since then, Lisa has written plays, and two novels – both of which have been optioned, with Lisa writing the screenplay. The first, Harvesting, featuring teenagers sold into the sex trade was shortlisted for several awards, and the second, the recently released Bright Burning Things follows the disintegration, through addiction, of Sonya, a former actress, now mother to a young child.

“I didn’t set out to write about addiction,” says Lisa. “I was interested in Sonya as a former actress. I made a conscious decision to leave acting, but I remember, the year I left life was very flat. It was such a comedown.”

Lisa’s creativity came out in her writing, but Sonya had no such outlet.

“Sonya has got a lot of childhood trauma; her mother died, and her relationship with her father and step-mother is terrible. She has never been allowed to express grief for her mother. She was bullied by exclusion at school. She had used acting to escape from all of that, so when it’s gone, that complicated grief is able to hit.”

The novel opens on a gloriously sunny day. Sonya, her son, Tommy, and rescue dog Herbie are walking through sunlight along Sandymount Strand. It’s a moment of pure bliss, but then, going into overdrive, Sonya strips to her underwear and plunges into the sea, leaving the dog and four-year-old to fend for themselves.

It’s soon clear that she’s downing several bottles of wine a day – and is incapable of caring for Tommy, yet she adores him, hates interference, and tries her best to keep everything together. The depiction of her disintegration, and the detail given of the Catholic state institution she ‘dries out’ in are steeped in authenticity.

“I am not an alcoholic, thankfully,” stresses Lisa, “but I do know it intimately. It’s been part of my life, with someone l love closely, and I’ve visited these religious charitable organisations where you go if you don’t have money or health insurance. They’re all over Ireland.”

That Lisa has nailed the loyalty of the rescue dog is not surprising. She adores her elderly dog who, as we speak, is ailing, and at the vet’s – but she’s not a mother, so how did she portray the complicated bond between Sonya and Tommy so accurately? She laughs, and tells me that, like Sonya, she was never cast as a mother.

“I remember a casting director saying to me, ‘you are really not a mother type,’ and motherhood was never in my life plan. I think it’s the most terrifying thing you can ever do, and I was always scared of getting it wrong. But motherhood fascinates me. I have friends who are single mums and it’s the hardest job in the world. And good God, nobody teaches you how, and poor Sonya was never mothered, and she’s no support. She’s saying, somebody help me?”

Lisa is, clearly, attracted by dark subjects, yet both of her novels have redemptive qualities. While it is disturbing living in Sonya’s head as she loses control and makes bad decisions, there is something so lovably vulnerable about her, that this reader always rooted for her. Lisa’s glittering prose lifts the narrative, making this a dazzling and absorbing read.

“I have a dark sensibility,” says Lisa, “but I don’t want to veer into the salacious or unreal. I don’t do it for the sake of being dark, or to shock. I’m conscious of not being totally alienating. Sonya is very human and real, and she’s not to blame. I have a lot of compassion for her, even though she is infuriating.”

The first draft of Bright Burning Things started with a voice and a kind of energy.

All this took time, and, worrying she would never get through this ‘difficult second album’, she attended an Arvon residential writing course in the UK – something she had done before and always found useful. She met an amazing editor there, who, impressed with Lisa’s writing and specifically with the voice of Sonya, introduced her to the agent Clare Alexander.

“She’s the most wonderful agent, so nurturing and present. She suggested changes. I don’t know how many drafts she read, but we got close to selling it in 3rd person narrator, with some chapters from Tommy’s point of view.”

Then, stepping back, Lisa realised it would read better if she wrote it, like Harvesting, in the first person.

“Once I did that, and took out little Tommy’s chapters, Clare said, ‘It’s like a different book.’ She sold it, just like that!”

This was in December 2019. By the time Covid hit, Lisa was hard at work on her next book. Set on a university campus, there’s a thriller element to it.

“It’s a revenge drama amongst a group of dysfunctional people. It’s very psychological; a literary thriller, and that’s not very fashionable these days. I’m concerned with the prose, I spend a lot of time with the sentence and the rhythm, but I want people to turn the page.

“Last year I was writing like a mad thing. But since December, the lockdown has felt relentless. I’ve been more anxious and jittery since then, not knowing when it’s all going to end.”

And it’s hard releasing a book without a launch, and with no likelihood of any live events.

“Last March I was thinking, God love my friends, like Alan McMonagle and Elaine Feeney whose books were due out then – I thought thank God mine is next year!” she shrugs. “So, it is disappointing.”

Lisa rents in Dublin, and says it’s not easy, right now, to live alone. And to complicate things, mid-lockdown, her landlord forced her to move.

“I’ve had seven or eight moves in 12 years and it’s not my choice,” she says. “When you rent, you’re vulnerable. I feel a need to speak out. I think I’ll write about it, down the line.”

Bright Burning Things leaves Sonya with a glimmer of hope. What does Lisa think will happen to her next?

“I think she will be challenged; staying sober will always be a battle for her, but she’s got great intentions. She’s determined to be a good mother and make sense of her life. I hope Sonia gets back on the stage. She’s not like me. I think she was a great actress and needs to be back doing her thing.”

Published in the Irish Examiner on 17th April