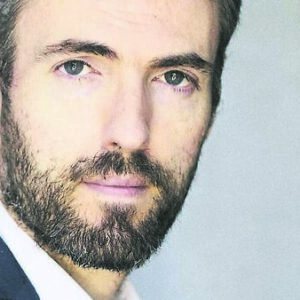 At 28, Kevin Power was flying high. His debut novel, Bad Day in Blackrock, published in 2008 had won high acclaim. Add to this, his 2009 wins of both the Hennessy Award, and the prestigious Rooney Prize, life, could, surely, not have been bettered.  Yet in truth, the young writer was struggling.

“In the way of young men, I was both arrogant and insecure. And when I returned to my desk, I found that I still had a big stretch of my apprenticeship to run. I’d written a book using limited means – the chapters were short, the paragraphs short and it contained things I knew. But if I wanted to go beyond that with richer prose and more emotion and tonality – I did not know how to do it.”

“Seeing my name at the bottom of a list of wonderful writers was hugely inhibiting,” he says. “It was paralysing. Publishing your first book is the shock of your life. Suddenly you’re exposed to scrutiny. The great thing about a dream coming true is that it is deeply unsettles you. Your inner world collides with a reality that is difficult to navigate.”

He had many moments of despair before his newly published novel, White City became a reality. But it’s been worth those years of toil. This wonderful novel- full of dark humour, anger and deep compassion, combines a wry look at the dubious goings on in the financial world, with the tale of a young man who, deprived of family love, finds his life spinning out of control. A kind of state of the nation novel, it encapsulates Ireland’s post Celtic world quite brilliantly.

Admitting that there’s an egotistical side to writing a novel, Power says he is happy with it.

“It’s the kind of book I wanted to write,” he says. “It’s not for me to say if its good or not, but I have done the best possible job that I can. I wanted to be able to open any page, and see a line, a joke or an image that I’m proud of. And I can do that.”

Power had been in the process of completing a PhD in American Literature when he had penned his debut. He hoped, with its publication, that he would be able to write full time. But Frank McGuiness, a mentor, advised him to complete the PhD, saying that if he needed to get a job someday, that qualification would make it a whole lot easier.

He did so. And meanwhile he continued to struggle with the new novel.

“I’d started a few weeks after Bad Day came out,” he says. “I wrote a monologue of a young man in a rehab clinic. I got 20 pages done and it was funny. I had a good voice there. But I didn’t know why he was there or what the story was, so I left it. And every now and then I would add a line or two.

A couple of years later, he was invited to Serbia on a literary junket.

“It was an odd week, he says. “Not a great experience. There was mostly terrible food and some eerie landscapes. I remember sitting on the terrace in a hotel in dense mist. Like being in a Dracula Castle run by the politburo.”

He took copious notes, and wrote a story based there, but he didn’t know how to link it to the young guy in rehab. But the following September, inspired by watching bankers and property developers enduring public disgrace, he wondered how it felt to be part of their families. He wrote another short story.

“And that’s when I saw how they all cohered together,” he says.

During this time, Power had avoided a day job thanks to grants from the Arts Council, and the money he made from journalism, literary essays and criticism. But the time came when he was obliged to take a series of jobs in call centres in order to pay the bills.

White City starts in rehab where the young man, Ben, is looking back at recent events. Son of a recently disgraced Dublin Banker, he had abandoned his PhD and attempts at novel writing, and, floundering in a sea of drugs, procured a dead-end job at a Call centre. When a schoolfriend offers him the chance to make a fortune from just one shady deal in the Balkans, he sees it as a way to escape all his problems.

All of which begs the question, how much of Power is there in Ben?

“It’s not undeliberate that his name has 3 letters with an e in the middle, and my friends call me Kev,” he says. “Ben’s sensitivities are mine. He is outraged by the same hypocrisies and the same bullshit that I am. The same bad art. But he does not have the family I had. I had two parents who loved me very much, and who wanted me to be a writer.”

Power didn’t come from Ben’s affluent world – a world he also drew on for Bad Day in Black Rock. Brought up in the rural village of Rathcoole, Power attended a community school. And he didn’t realise there were rich people in Ireland until he encountered them as a student at University College Dublin.

“I used to get the number 10 bus from town to Belfield. You’d pass these extraordinary big Georgian terraced houses. And then, down Morehampton road into Donnybrook, there were these beautiful leafy streets with enormous houses. I would think who lives there? What kind of person?

“Then I started to meet them in my classes and various societies at college, and I ended up at parties in these houses and I knew these people and gained sets of insights into this small, contained world. There was a kind of freemasonry of identities between the schools these people went to,” he says.   “A lot of people I met there are still my great friends. I borrow from them, so there is as much of them in Ben as there is of me.”

Unlike Ben, Power’s only addiction was a passion for smoking. He still misses it. But the novel isn’t about addiction per se.

“It’s more about the psychology of denial,” says Power. “Ben says, at one stage, ‘Drugs are a way of not seeing’. That’s true. We take pills, drink, or cigarettes in order to avoid facing that which we don’t want to face.”

Since those call centre days, Power has returned to academia, teaching creative writing first at St Patrick’s College, then Dublin City University, and now, as Assistant Professor on the Creative Writing programme at Trinity College Dublin. But with his family, writing, and journalistic commitments, life is busy. And in lockdown, having to teach on- line, and help care for his two-year-old daughter, times have been particularly fraught. Yet he has started work on a new novel and plans to publish a collection of critical essays.

We speak the day after he returned from paternity leave – his son was born just three weeks ago. He has no plans to write fulltime.

“If I have too much time on my hands I don’t write,” he says. “I have a panic instead. I love working in Trinity. I love academics and I love teaching. Years ago, I thought of myself as an introverted hermit, but I need interaction to thrive. I found this last year really hard, not seeing colleagues, friends or students.”

Published in the Irish Examiner on 29th May.