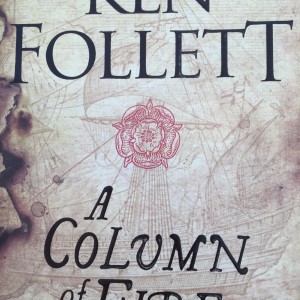 When Ken Follett left University College London in 1970, he had three choices of career. He’d been offered jobs by the consumer goods giant Unilever; by ICL, which was then considered the British equivalent of IBM; and by Thompson Regional Newspapers. He took the third choice.

“It was the right decision,” he says. “Computers did appeal to me, and who knows, I might have become Bill Gates, but my ambition was to be editor of The Times.”

It wasn’t to be. A reporter for five years, first in Wales, then on the Evening News in London, Ken realised that he didn’t have journalistic talent. Frustrated, he worked for a small publishing company, and wrote fiction in his spare time. The first ten books sold poorly, but his persistence paid off when, in 1976, his wartime spy thriller, The Eye of The Needle, won stratospheric international advances, and went on to sell over ten million copies.

Several best sellers followed, then in 1989, he changed direction, and wrote a door-stopping historical novel, The Pillars of the Earth. Set in the Middle-Ages, it tells of the building of a Cathedral in the fictional town of Kingsbridge. Hugely successful, it still sells 100,000 copies a year.

The latest tome, A Column of Fire, is the final volume in The Kingsbridge trilogy – the second, World Without End was published back in 2007. There’ve been many stand-alone books, and The Century Trilogy written in between.

Set in the Elizabethan era, the action moves between England, France and Scotland, with forays to Spain, and the Netherlands. And if I baulked at the size of the novel, not to mention the four and a half page cast of characters, I soon found myself subsumed into a fascinating character driven saga.

This interview takes place in a meeting room at Dublin’s Merrion Hotel. The multi-millionaire proves an engaging enough companion. A permanent, dimpled smile, and expressive bushy eyebrows give him a quizzical expression. Clearly finding himself amusing, he laughs, long and loud, after most of his anecdotes.

Why did he decide to return to Kingsbridge in the Tudor era?

“It was when I discovered that Elizabeth 1st had set up the first secret service,” he says. “Writing from the point of view of spies and secret agents is always a good way into a historical period, because whereas history tells the official story, spies, being the behind the scenes people, tell the real story.”

It helps the narrative along too.

“Spies are always being deceitful. They’re always in danger of being discovered, so there’s suspense all the time.”

The action follows Ned Willard, from protestant merchant stock, who is in love with Margery, a higher born Catholic, whose family, having allusions of power, force her to marry into the Catholic aristocracy. Spanning a turbulent half-century, we watch as Ned works for the court of Elizabeth, whilst Margery’s brother, the power mad Rollo, conspires on behalf of Mary Queen of Scots. It’s a massive canvas, with numerous plots, massacres, and love dilemmas. How did Follett construct it?

“That’s the fun stage,” he says. I start off with the formation of the spy story, and ask, what happened before, and what happened after, and who are these people, and why are they the way they are? I write a paragraph in a notebook the first day, and it grows, a paragraph, then a page, at a time as I add to the story. So, although the germ was the formation of the secret service, it begins in the year Elizabeth took the throne.

“She had ten years of peace, then after the St Bartholomew’s Massacre, the plots against her increased, and it’s only then that Walsingham and Ned really start their work. So the event that inspired me is roughly half way through the book.”

It’s no surprise that the author sees more of himself in Ned than in the darker characters like Rollo, or the notorious French spy, Pierre Aumande. Ned is the hero; the one we root for as he does everything in his power to keep Queen Elizabeth on the throne.

I was more surprised that he gives his women characters – specifically Margery and Sylvie – more brains, clear-sightedness and emotional intelligence than any of the men. Is he a feminist? Laughing, heartily, he says it’s dangerous thing for a man to say about himself.

“And I wouldn’t dare. But I was 19 when the second wave of feminism started. Those women and girls were our friends. We were at university with them; they were the girls we wanted to go out with and go to bed with, and they were saying ‘We demand equal treatment.’ It was easy for men of my generation to take that on board.”

Not so his father – a Plymouth Brethren from Wales.

“He, bless his soul, never accepted that women were equal to men. He would never allow my mother to wear trousers.”

As a child, Ken accepted the strictures of his religion. He believed that he couldn’t eat ice-cream on Sundays; and the blanket ban on TV and the cinema didn’t bother him much, because he was, and is a voracious reader. But at 15, he argued with his father, and decided to study philosophy in order to research religion further.

“Six months at UCL was enough for me to become an atheist, and I still am, although I now call myself a lapsed atheist, because I quite like going to church.”

And, clearly, he is fascinated by the machinations of religion – and the bitter Tudor battles between Catholicism and Protestantism. After an atrocity in England, where a Protestant is burnt at the stake, the community is more upset that the corrupt Catholic Bishop has put a protestant business into ruin.

“That’s a complicated subject, but there is a theory that suggests it. And certainly, the religious wars were more about power than theology. How could you execute someone over the doctrine of transubstantiation? Usually, the wars came about because Protestantism threatened the power structure. And the people who adhered to Protestantism were, what we now refer to as the rising Middle-Class. They were often craftsmen, minor aristocracy, or merchants.”

Ken Follett is, famously, a rigorous supporter and benefactor of the Labour Party. A Blairite, whose second wife, Barbara served from 1997, he says he was, personally, never close to Tony Blair, and feels he became a sad figure, after telling fibs about the weapons of mass destruction.

“But I don’t feel let down by him,” he says, “He was the right person to be leader and to be Prime Minister. When I look back at that era I think the labour party did a tremendous amount of good.”  He talks, proudly, of Barbara’s contribution; of the minimum wage bill for which she worked so hard; but he doesn’t mention the expenses scandal, that led to her sacking in 2010.

What is it that keeps Follett writing.

“Sales are important. I do love being number one. But it’s also the level of people’s enjoyment. What pleases me is when readers say, ‘I love that book. I read it 10 years ago and I still remember it.”

Ken is now 68 years old, to Barbara’s 74. With several luxurious houses around the world, he clearly has no need to work, yet since finishing the manuscript of A Column of Fire last Christmas, he has started working on another book. Will he retire?

“I could, but when I go to hell, they will make me play golf every day.  I want to do this. Writing is the most interesting thing in my life. It is completely absorbing, and it is still difficult. It’s difficult to write a book which will interest the reader continuously. That is the thing.”

Published by The Irish Examiner, on 4th November.