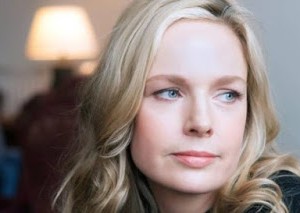 I first met Julia Kelly in 2007 the day after her debut had been launched. She told me she was wrecked, but she looked amazing in her low-cut, body-hugging black dress. With My Lazy Eye had been described by John Banville as, ‘surely the freshest voice in Irish fiction since the wonderful early novels of Edna O’Brien,’ yet the author was self-deprecating, admitting to nerves and worry about the publicity to come.

Later in the month we shared a table at a literary lunch with her partner, the eccentric artist Charlie Whisker. I warmed to the couple; they were exotic, intelligent, intensely interesting and clearly mad about each other.

They’d met back in 2004 at the Tyrone Guthrie Centre, the well-known artist’s retreat in County Monaghan. Taking her first tentative steps towards writing, Julia was mesmerised by the older artist, and his six-foot pet iguana, Skippy.

The two began a romance, with Charlie taking the role of mentor to the underconfident Julia.

“He really taught me,” she says. “He went thorough every chapter and taught me to take out lazy words. And he used to print out long lists of words that he felt I could use in my work.”

By 2007, they had moved in together and purchased an impressively large house in Bray. Life was good. Charlie’s career was on a high, and the two enjoyed a jet-set life, mixing with Bono and Van Morrison. Julia remembers, once, serving four games of double-faults to an audience of Penelope Cruz. Their happiness was sealed in 2009 with the arrival of their daughter Ruby Mae.

I meet Julia to discuss her third book, Matchstick Man, in her apartment in Dalkey which has views to die for. We sit at the kitchen counter of the light open-plan space, looking across Sorrento Terrace to Dalkey Island beyond. It’s a beautiful, bright apartment – a perfect place to write, but it’s rented, and Julia yearns to own a small house in which to live, securely, with her now, nine-year old daughter. Still beautiful, and in black, Julia’s style, trousers and a top, is relaxed now.

“I’ve been through the wringer,” says Julia, laughing ruefully. And, having read the powerfully poignant memoir, which catalogues her years since our first meeting, I can only nod in sympathy.

Charlie has Alzheimer’s. At 68, he lives in a nursing home. Julia and Domino, his younger daughter from the marriage with Mariad Whisker, visit each day.

“He’s an incredibly benign, sweet character most of the time,” says Julia, “and he’s still quite lucid, but on the days when he is depressed, and kicking off, trashing the place and losing it, it’s distressing – except that it’s the real Charlie!”

His early-onset-Alzheimer’s, diagnosed in 2014, crept up on the couple.

“The first thing I noticed was when he wrote me a birthday card and missed out letters. He had always been so good with words and with writing. It upset me so much. Then we went abroad. He drove on the wrong side, and he couldn’t work out the currency, or get back to the hotel room. He just stopped being able to function. I put it down to jetlag, stress, or his age.”

Then two, unrelated tragedies happened. Julia’s mother died, whilst swimming in the Galapagos, and in 2013 she lost a second daughter, Lucia, in a late miscarriage. Charlie sank into a depression, stopped painting and raged with the world.

Difficult to live with, he became increasingly anti-social, cutting out Julia’s family and friends. He could be aggressive too. Julia put it down to his creative nature, and the fact he had never been practical.

“I thought I was doing too much for him and making him totally dependent. I thought I’d caused this.”

It didn’t help that Julia, working on her second novel, The Playground, no longer welcomed Charlie’s input.

“We had terrible rows if he didn’t like something, and I got incredibly upset about it. I was in survival mode; I’d lost my mum and the baby, and I just wanted the book out.”

By the time The Playground was released, their relationship was broken. Julia was reluctant to leave Charlie, but his erratic behaviour was beginning to impact on Ruby Mae. He once washed her hands with scalding water, and tried to put her into her car-seat upside down. Sensitive to noise, the pitch of her voice was intolerable to him. Selling the house in Bray, Julia moved in with her sister, finding an apartment for Charlie. She and Domino visited each day caring for him until it became untenable.

The diagnosis, although devastating, had at least explained things.

“Charlie said, ‘That is what was wrong. It wasn’t my fault. He felt incredibly upset that he’d been rude to my family and friends, who adored him. I think for a long time he was suffering silently and was scared and frustrated.”

Julia is still anxious about publicity, and about how her book will be received; and that’s not just because it’s such a personal account. When The Playground came out, an anonymous neighbour put a torn apart copy of the book through Julia’s post-box with a threatening message urging her to leave the area.

“It upset me terribly. I never found out who it was, but it was a very sad way to leave Bray.”

She hadn’t planned to write about Charlie. But she was having trouble penning her third novel, which was about a wedding in Italy.

“One morning I was feeling overwhelmed and upset about life. Charlie asked me what I was writing, and I said, ‘I’m writing about you.’ I said it in a resentful way because I hadn’t wanted to, but it was the only thing on my mind. And he said, ‘Will you write about me?’

“At that point Charlie felt lonely. He felt he had lost his identity. He felt invisible. I said, ‘I could, if you want me to, but it will be about the good times and the bad.’”

She wrote it for Ruby Mae, including details about her father’s high days in America, making music videos for the likes of Bruce Springsteen and Bob Dylan, as well as the troubled times coming of age in Northern Ireland.

“And I wanted to set the record straight. I kept hearing that people were saying that I’d abandoned Charlie, and that I was doing nothing for him. I was making time for him every day, and this was from friends of his who never visited. And at that point I was so stressed, I was close to breakdown.”

For all the tragedy, the book is full of love.

“I think, and hope, Charlie comes across as a lovely man,” she says. “I love him deeply, still, though it’s no longer a romantic love. And there’s a real beauty to Alzheimer’s even though it is so cruel. Charlie used to be very interested in his life with Rockstar friends and a younger woman, and that means nothing to him now.

“He sees beauty in the tiniest things; colours, to him, are intensely vivid. We went for a walk recently in Blackrock Park and there was this little bunch of daisies. He squatted down and said, ‘look at these guys – aren’t they perfect!’”

Now 48, Julia is hoping for a calmer future, but she has no regrets.

“Charlie often says, ‘I’m useless. I’m ruining your life. I’ve given you nothing,’ and I say, ‘But Charlie, you have. You’ve given me my writing career and you’ve given me my beautiful daughter.’ I can’t think beyond Ruby Mae. She is such a lovely kid, and she is so like him.”