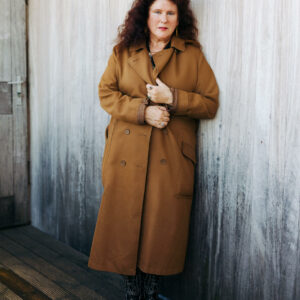 When Judith Mok was fifteen, she became a student at the Royal Conservatoire in the Hague. A gifted singer, she was thrilled to receive a Masterclass from Elizabeth Schwarzkopf, the diva whose voice had filled her dreams.

It was only later that she learned that the famous singer had been a Nazi – and had made propaganda films to please Hitler. And that, as the mistress of Hans Frank, the Butcher of Poland, she had given recitals in Auschwitz.

“You won’t believe this,” she says, when we meet on a rainy Dublin day. “But she gave a recital on the day my grandparents were there. It was almost the same hour that they arrived on the train and went into the gas chambers – It’s insane! And then she became my teacher.”

This story is recounted in Judith’s recently released memoir, The State of Dark, which describes the effects of being born, post-war, to holocaust survivors. We’re talking in her apartment, looking out over the canal. Exotically furnished, the apartment is full of books, piled haphazardly on bookshelves. There’s a ship’s clock, and a framed gold disc of her pupil Dermot Kennedy. A cat purrs contently at my feet and there is a languorous atmosphere of calm.

Born on the shores of Bergan ann Zee, Judith spent her early life between Holland and France. It was a bohemian childhood. Her parents were among the first members of Amnesty and had tremendous tolerance. In her formative years, they lived in what she describes as an artist’s village.

“Everyone came together,” she says. “And nobody had any money. So, whoever sold a painting would distribute the money around.”

Her parents were multi-lingual.

“My mother spoke Russian, and I spoke French, German, Spanish and Dutch. It was just whatever word you couldn’t find in one language you would say it in another.”

Her grandfather had known, and sung for Gustav Mahler; and her father, a brilliant man with the humour of Woody Allen, was a poet, critic, commentator, and writer of 84 books.

“That included Children’s novels,” says Judith. “He was incredibly prolific.”

He loved to sing too.

“Music surrounded me all the time,” says Judith. “In Amsterdam we would go to every exhibition – every monastery and every church, and he bought us a piano so that we could practice. He also bought a gramophone, but with Beatles records. He said John Lennon was a visionary.”

He had a huge influence on his daughter.

“Creativity was normal,” she says. “My parents expected me to excel – It was ‘serving your talent.’ You integrate as a Jew, but you have to excel. Otherwise, you are not accepted.”

And excel, she did! Performing large professional roles in the greatest opera houses in her early twenties, she won competitions, yet she never stopped learning.

“I was eager,” she says. “And I loved studying. I loved the stage, and singing, but I never thought, oh, I’m good enough, I can do this! I felt I needed guidance.”

Her music took her around Europe and beyond. She lived in Paris, Vienna and Barcelona, and spent a three-month season in Buenos Aires each year for eleven years. She’s lived in Dublin since 2002, with her husband, the poet and critic Michael O’Loughlin, whom she met 36 years ago in Barcelona.

“I was singing in the opera, and he was just out of Trinity, and was teaching English. He’s just majorly intelligent, and erudite,” she says. “And is probably one of the cleverest people I’ve met in Ireland.”

They have a daughter, Saar – named after her father’s sister, who befriended Anne Frank at Auschwitz, before she eventually perished.

Although Judith describes a good and fulfilled childhood, she was always aware of the sadness that pervaded.

“My father had days when he wasn’t there – he wouldn’t talk. This happened for 3 or 4 days, but we just expected that.”

There were many tragic stories of his relatives, but he never found out, exactly, what had happened to his parents. And when, after their deaths, Judith was going through her parent’s library of 10,000 books, a list of her family’s deaths slipped out from a volume, and Judith decided to investigate further. She contacted the Westerbork transit camp in Holland, where the transport of Dutch Jews to concentration camps was facilitated.

“I wanted to learn the facts – the precise facts,” she says.

And she learned that her grandparents had perished before being registered as inmates – hence the lack of records.

When Judith’s half-sister – child of her father from an early fling – rang to tell Judith she had been in the house, in hiding, when her grandparents were arrested, something she had kept a secret all those years, Judith decided it was time to research and to honour her forbear’s memory.

At times, she found this unbearable. In Riga, coming across the Jews in Latvia museum, Judith watched a film showing the massacre of Jewish doctors, women and young girls – dragged onto the street and shot by zealous Latvians.

‘I see an orchestra of neatly arranged young girls,’ she writes. ‘Sometimes with a fist clenched round their bows or violins. They lie there, eyes open, as if about to get up again.’

Back in Dublin, Judith fell ill.

“I came back here and had this raging fever, and felt, what’s wrong with me? I couldn’t deal with it all. It was like looking at my own family.”

The extraordinary thing about Judith’s book, The State of Dark, is how she makes the telling bearable to the reader. Divided into mini essays, talking of different people, and different stages of her life, what comes over, most of all, is the sheer humanity in her telling. And the writing is poetically lyrical. We feel all the emotions, and at the same time, admire the literary content.

And that’s not so surprising. Declaring, at a young age, that she wanted to be a singer, and also write, Judith published her first short story aged 19. She’s written novels, and collections of poetry, in Flemish, before turning to English, but this is her first non-fiction book.

Judith sees a direct correlation between singing and writing. In both, you need passion, but also technique in order to create emotion in the listener or reader.

“You’re passionate about putting the emotion in the music,” she says. “But you can’t be emotional. Then you feed off the breath of the audience.”

Some years ago, she toured the world with a one woman show, Molly Says No, a dramatic recital written by her husband, which was originally commissioned for the Joyce Centenary celebrations. She also finds time for teaching – she coaches both classical and popular artists.

“I’ve coached some of the world’s biggest rock stars,” she says, and adds, “You have to do something. I am someone who is easily bored.”

The book covers love, history, genocide, grief, family dynamics, and secrets kept and uncovered. An hour of eclectic conversation has passed in a flash, and I feel I have barely scratched the surface of Judith’s life. As Michael joins us from his writing hub next door, I prepare to go – but feel I could have talked to Judith not only all day, but all week. I ask her what she feels is the main message of the book.

“For me, the book is about Judaism, but it’s also about this very peaceful culture and the enlightenment that existed in Germany. I always say Hitler won the war, because he destroyed something that will never come back – this tremendous peaceful culture. There is nothing left, and I am the last of the Mohicans.

Published in the Irish Examiner on 12th November