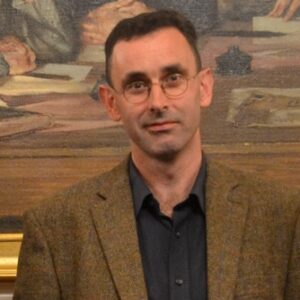 John Ware has been passionately interested in history for his entire life. And, specifically, in the events of the First World War. As a child, he devoured war stories – both factual and from his comics, and he begged his mother to let him take ‘adult’ WW1 books out of the library.

It’s no surprise that his debut, Dirty Shirt is set in the First World War. The only puzzle is why he has taken such a circuitous route to writing it. In the early nineties, taking an MA at Universal College Cork, he chose Medieval History. His plan was to go on and take a PhD – but he realised that he wasn’t cut out to be an academic.

Instead, he took himself off and got a job in construction. He worked in various roles but ended up as a Draughtsman. But then the recession hit. And in 2010, after two years of worrying about the economy, the axe fell. That came as a blow. But ten years on, Ware says it is the best thing that could have happened.

“As a draughtsman I was sitting there, fabricating drawings, and that was good in a way. But I was dealing with some real cowboys, and tight deadlines during the great stretch of the construction boom. And I’m not really a team player. I’m too much of a dreamer.”

Ware hasn’t had a fulltime job since.

“I’ve had no grown-up responsibilities,” he says. “And I’ve been getting away with it for ten years!’

We’re chatting over zoom. Living alone, in Cork’s Blarney Street, Ware says that this is the first conversation he has had in 10 days. Lockdown has been lonely for him; he has greatly missed face to face encounters. And when restrictions were eased at Christmas, he couldn’t stop talking.

There have been compensations.

“I have appreciated the silence. I Love the atmosphere that prevails over the city. I live right on the street and with pubs closed the weekends are so quiet. I love walking around the empty city. I will miss that.”

Ware hasn’t been idle. Soon after being made redundant, he threw himself into creative writing. And although his first endeavour didn’t make the grade, he says the learning from that has served him well in the years since.

Around that time, his former tutor from UCC got in touch, asking him to give a guest lecture.

“He was teaching something in which I had written my Masters,” he says. “That put me on the radar. I’ve been getting part-time gigs from there on in. It has suited me down to the ground. For several years now, I’ve been teaching a course called Ireland’s Great War.”

This came from his early research for Dirty Shirt. Looking back at that time, he’s unclear whether his research drove the teaching, or the teaching the research.

“I thought of Dirty Shirt as my ‘proper,’ book, and I never felt it was good enough, so I put off the writing, and did more and more research as an excuse. And to monetise the research, I had to talk about it, and it became a teaching project, which pays – and leads to other projects.”

Once he’d persuaded himself to sit down and just do it, the first draft was complete in six months.  It’s a fascinating tale – fun fast and furious – and it shows an aspect of the Great War in a way never attempted before. It opens when a young American, Daniel Wyndham, arrives in Tralee searching for the mystical Ireland of WB Yeats and Lady Gregory. But when, venturing into a pub, he meets Privates Moriarty and Lynch, hard drinking Redcoats of the Munster Fusiliers, he sees a side of Ireland he can never have imagined.

After a street brawl, he finds himself a prisoner at the barracks – and, forgotten about, is only released days later. His rescuer, Major Fitzmullen-Brophy, a seasoned officer who fought in the Boer War, takes to the young man. And persuades him that, rather than return to the States, he should join the regiment – The Royal Munster Fusiliers, 3rd Battalion, as a reservist. Wyndham agrees, but is dismayed to find himself surrounded by belching, unwashed louts.

Sometime later – the Major – going rogue, takes his band of amateurs to France, hoping to fight in the war. After a few misadventures they find their regiment and are thrown into the thick of it. The account of the battles that follow, impeccably researched, show the full horror of war, but also the men’s resourcefulness. How did Ware get the inspiration for this lively – often hilarious – blend of fact and fiction?

“Pretty much everything I’ve read about the First World War emphasises Wilfred Owen’s doomed generation. I’m not saying that’s wrong, but it’s not the way people saw the war in 1914. Then it was Kipling’s war, fought by people who did that sort of thing professionally. They believed in the Empire, and the justice of the cause.

“I’m fascinated by armies and wanted to look at it as it was 100 years ago when it was a monastic society. In the barracks they weren’t allowed to marry; they lived purely for the regiment. I wanted to look at that from the outsider’s point of view.”

Another fascination was the Irishness of the British Army back then.

“There were battalions scattered all over the place in Ireland; there was one in Tralee and another in Kinsale. A third of the army was in Ireland and an eighth of the rank and file of the British Army were Irish. But in the Officer Corps, it seems almost everyone was Irish, of the fishing, hunting shooting variety. It was filled with Irish gentlemen. Lord Kitchener called himself English, but he was born in Listowel and grew up in Kerry!

“I loved going into the minutiae of regulations. They were issued with just 3 pairs of socks and 2 shirts. They were sleeping in damp blankets, in the company of street urchins living on bread and margarine and being roared at all day. No one, in this day and age could put up with it. It’s so horrible!”

Throughout all of this, however, friendships and alliances are maintained. And Wyndham, managing to hang on to his romanticism, tells the men stories of Ireland’s myths and legends. And if, when he’s eulogising over Deidre of the Sorrows, the men are only interested to know if Deirdre has big tits, that doesn’t stop them gaining some enjoyment in the narration.

Since penning the debut, Ware has been commissioned to write three fan fiction novellas about Judge Dredd – a character he has followed since he was a child. He’s enjoying the writing of them, finding them light relief. Meanwhile, he is hard at work on the sequel to Dirty Shirt.

“I’ve finished a draft and have to go back and edit. Everything changes for the Irish Army in 1915 because all the old moustachioed professionals were dead. Kitchener had pointed his finger for replacements, and the young men who stepped forwards were Nationalist Home Rulers. They say their prayers at night, don’t drink and don’t have VD. They all believe in God’s Holy Catholic Ireland, and they become British soldiers for the duration.”

Thankfully, he kept his three main – and most memorable characters – Wyndham, Moriarty and Fitzmullen-Brophy alive.

“They’re good material to work with,” he says. “In writing I have to maintain emotional engagement, and this is where my heart is. It’s with the Royal Munster Fusiliers, third battalion.”

Published in the Irish Examiner on 10th April.