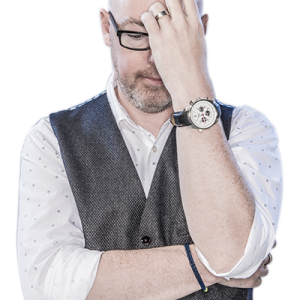 John Boyne quite enjoyed lockdown. Without the need to get out and meet people – without appointments in his calendar, he spent his days doing what he likes best; simply reading and writing. Starting at 8.00 am, moving, throughout the day, between his computer and the hanging chair in his garden, he felt utterly content.

His house, in a quiet cul-de-sac in Rathfarnham, was made famous when it won RTE’s celebrity House of the Year. Full of bookshelves; of artwork and clever alcoves, it’s a restful, calming space. We’re relaxing outside, drinking coffee.

It’s twenty years since Boyne’s first novel, The Thief of Time was published, and it’s a time for reflection. I first met him in 2004, on the day his third novel, Crippen, was published.  I found the former bookseller serious and committed, a young writer with a plan.  That same day he’d signed a two-book deal for The Boy with the Striped Pyjamas. He said, at the time, that it was the best day of his writing life – and would probably never be bettered.

Since then there have been nine novels for adults; five for children, and a collection of short stories. Has he achieved everything he dreamed of, back then, near the start of his career?

“Yes, I think I have, actually,” he says. “What I always wanted was a sense of security in publishing, because I’ve seen many people come and go. I have that. I have long term publishers all over the world.

“I’ve always wanted a challenge. And my last three books, The Heart’s Invisible Furies, The Ladder to the Sky, and My Brother’s Name is Jessica, were all big books. I felt, with each one, I was moving up in terms of ambition. And for this one, I wanted to do something incredibly ambitious.”

And he has. Traveller at the Gates of Wisdom, moving from country to country, starts in Palestine in Ad I, with King Herod’s murder of the innocents, and ends on a space station in 2080. Showing how stories are universal, and how although history changes, human emotions remain constant, it’s a richly rewarding read. There’s a lot of violence, but the humour softens the grisliest scenes.

As we move through the centuries, we come across many figures from history. There’s Michelangelo, Shakespeare, Pope Julius 2nd, even Donald Trump, and there’s a smattering of characters who have appeared in John’s earlier books. A key scene from The Absolutist, when Will Bancroft is shot for cowardice – he is a conscientious objector – is re-enacted here.

Whilst many of Boyne’s women characters are feisty, to say the least, their subjugation and lack of choice is vividly shown. As a self-confessed feminist writer, does he feel that’s now been resolved?

“It’s always better than it was, but I don’t think it’s anywhere close to where it’s supposed to be,” he says.

This novel is a great read – fluid, clever, and vastly entertaining, but just how did he set about writing such a complex tale?

“I didn’t plot it all out at the start,” he says. “I wasn’t really sure what the idea was, other than it was spread through the history of all time, so I sat down and wrote the first chapter. I wrote 10 to 12 pages, thinking, what can I do with this? Is it going to be reincarnations? Then I thought, no. I’ll structure it where each narrator has exactly the same experiences, and use the same initials, but never explain it. It’s going to divide readers; I think some people will love it and fall into it, and others will go, ‘I don’t get this.’” He shrugs.

Whilst he’s great friends with many writers; he cites John Banville, Rob Doyle and Paul Murray amongst his close friends, Boyne has consciously avoided Dublin’s literary scene. He rarely attends launches; doesn’t like parties, and having brushed with controversy, has given up reviewing Irish books.

“I think I’m old and grumpy,” he says, then laughs.

In the past, Boyne has often criticised experimental writing.

“I do think there are writers who define themselves by experimentation, and sometimes, I think its meaningless. And that people are afraid to call it out. And I have been sneery over the years, and now, here I am, trying to write something experimental myself. That will teach me!”

Is he worried about the upcoming reviews?

“I worry more about interviews,” he says. “I worry that, in interviews I will say something stupid, or come across as stupid.”

And being exceptional honest and open, he has, I comment, got that reputation. There was that memorable interview two years ago, when, on radio with Brendan O’Connor, he poured out his grief at the breakdown of his marriage.  He said he’d recently attempted suicide.

“I didn’t plan to say that” he says. “I can’t even remember what Brendan asked me. But I can remember slumping in my chair and, whatever line I began with I started talking. I came out of the studio feeling empowered, and good about myself. At the time I was ready to throw myself into the Liffey, but two years later, I can recognise it was quite unfair to Con. I have a microphone in front of me, and he doesn’t.”

He has said that he’s not looking for love – but when I question him further, he admits that, down the line, all that might change.

“Maybe in a year from now. I am in a better space, but I can’t go through that pain again. I wasn’t sure at one point that I would get through it.”

What, I wonder, do John’s publicists make of his public pronouncements, along with the – more than occasional – spats on social media.

He laughs. “Oh, they try and shut me up all the time. I know I make their lives difficult at times, but I don’t mean to.”

There was furor over the gender issues he explored in My Brother’s Name is Jessica, with some critics commenting that, not being transgender himself, he had no right to pen the book. He has fun, exploring that argument in this new novel, where, amongst other observations, a lady novelist is criticised for using a male narrator, when she’s not a man.

Now that he is feeling at peace – if not, quite, in his personal life, then certainly in his working one, he is looking for a new challenge.

“I’m going to be 50 next year. I feel settled in my career, and its twenty years since I was published. It’s one of those moments. I want a new hobby, or to live somewhere new. Maybe I’ll live in New Zealand for a year or two.”

Pondering on, he says he’d like a radio show to interview strange people – creative ones, though not necessarily writers. Or, maybe he’ll be a deckhand.

“Sometimes I think I would really like a job. To be around people more. And, this will sound really crazy, but about a month ago I really did look online to see if there were any jobs going in Waterstones. My years there were the happiest of my life. I thought, wouldn’t it be fun to go back and be a bookseller again? But then I thought, I can’t do a five day a week job and still write.” He pauses, then says, “Whatever it will be, I’m enjoying the search.”

Of all the periods he wrote about in the book, he would most like to have lived in the Renaissance.

“I’ve always had a thing for that period. It seems like a colourful time, and a good time to be an artist. I can certainly see myself there.”