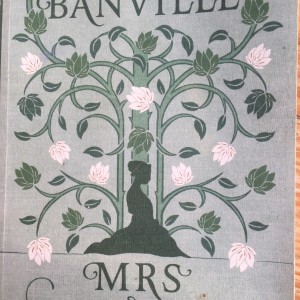 When John Banville first read A Portrait of a Lady, he fell in love. In his twenties at the time, mesmerised by James’s genius, he was enchanted by the style, innovation and restraint. But most of all, he loved the heroine, Isabel Archer. And he has remained in love with her for all the years since.

“It’s interesting,” he says, “because in my twenties I saw her as an adventuress making a brave venture into the world, and she is, of course, but when I read it now I see how subtly James portrays her youth, her naivety.  In a way, Isabel is a kind of monster in a book full of monsters.”

Last year, he taught A Portrait of a Lady, along with The Turn of The Screw in Chicago, on a scheme, dreamed up by Saul Bellow, named Committee on Social Thought. And it was there, that he wrote most of his new novel, Mrs Osmond, taking up Isabel Archer’s story where Henry James left off.

The project was suggested to him, years ago, by his wife, whom he describes as a great Jamesian.

“She said, ‘we all know that book is not finished.’ James himself, speculated, would he finish it, and he decided not, because he had other things to do. So, in my arrogance and stupidly, I decided he had left it to me. And besides,” he pauses, and takes a sip of his wine, “I wanted to see what would happen to Isabel.”

At the close of James’s novel, Isabel had fled Rome for England, to be with her beloved cousin, Ralph on his deathbed. She had recently learned of her husband’s treachery, and we’re left, not knowing what her future holds.

“Reading a Henry James novel you get exactly the same sensation as walking through the world. You’re not quite sure who is lying, who is telling the truth, or what’s going on. In Portrait of a Lady James invented the notion of how a novel could capture what he deems as the conscious.

“There is a famous chapter where Isabel sits by the fire, and I think that is the point where the modern novel was invented. She thinks deeply about herself as a moral being in the world. Nothing happens, but it is the most exciting chapter in the book.”

There’s very little plot in Mrs Osmond – yet it makes for sublime reading. You’re transported into Isabel’s world; from London, to Florence then Rome – following her eccentric decisions, and ultimately, her clever scheming, with rapt attention. There are encounters and conversations with friends, acquaintances, and with the abhorrent Gilbert Osmond. There’s humour, and pathos, and quite wonderful imagery.

The most memorable of these, is of a man Isabel encounters outside Paddington Station. Barefoot, he stands, clearly disorientated, weeping copiously.

“I saw that man in Westmoreland Street one day. I had walked past him and was going back and I saw that two people were taking care of him; a man with a rolled umbrella and a middle-aged woman. They were taking him off somewhere to get help for him, and it was sad. He was holding on to the back of the man’s jacket, and this poor man…”  He takes a breath.       “I can’t even talk about it, or I’ll be in tears.”

That’s the thing about John Banville. He presents himself, in public, as a bit remote, arrogant, and frankly, terrifying. When he won the Man Booker prize for The Sea, in 2005, he said how nice it was to see a work of art win. Scratch the surface, though, and a softness emerges. He’s funny, relaxed, and often, more than a little flirtatious.

Banville often talks of the difficulty of writing literary novels. He typically writes 200 words a day, and once spent three months composing his first paragraph. Writing as Henry James was altogether different. Writing most of it in two months, he penned 3,500 words a day.

“Psychologists say that we have this capacity that, when we have a task to do that is in our area but not our usual thing, that we can hypnotise ourselves without realising it, and I think I wrote this book in a kind of hypnotic trance. Sometimes I could get up for a cup of coffee and come back and another page would be written.

“When I started writing it, I had a vague notion of what I would do, and most of it involved following Isabel.  Writing a book is company. When I wake up at four in the morning, instead of thinking about sex, as one used to, or your bank account, or death, you can think about the book. And that’s what I hope readers will get from the book. Company, and good conversations.”

Banville gets irritated when people complain that his books lack plot.

“I say to them, ‘is there a plot in life? Have you noticed yourself going from beginning to end?’ They mention love affairs. I say love affairs are the messiest thing of all. They never end, and in a peculiar way never begin. That’s what I try to capture.”

It saddens him that, in recent years, plain writing has become the norm.

“Style has become unfashionable. The younger writers seem to have given up that wrestling with language that we did. If you spend time reading a novel or poetry or well written history by a good writer, who is inside what he or she is writing, you look at the world in a different way. It’s immensely rewarding and pleasurable, and I’m not prepared to let that go.”

Banville’s portraits of the Jamesian women are supreme. He clearly enjoyed writing them from the feisty Henrietta to the monstrous Madame Merle. Then there’s Isabel’s maid, Staines, a character added by Banville.

“I can see her,” he says, emotion in his eyes. “She’s all gawky. And she loves her mistress. She loves her for her selflessness. She thinks she is superb, and she is.”

Mrs Osmond ends as ambiguously as its predecessor. It wasn’t Banville’s original intention but it feels utterly right. Might he write another follow up?

“Oh no! That would be too much! But I would like to think somebody else might. I’d like to see a really good fulfilled middle age for Isabel.” He sighs. “But I don’t think anyone would have the foolishness or the arrogance that I had, to try and write in  James fashion.”

What would Henry James have made of Mrs Osmond?

We talk of Banville’s reputation as a misogynist; one he utterly refutes.

“This book gave me the opportunity to celebrate my abject admiration for women. Isabel represents for me all the women I have known in my life. Everything I have learned, I have learned from women; any pleasure I’ve had, and I’m not talking about sex; the pleasure of conversation, being taught to look at things, and it all started with my mother. There’s a quality of generosity. You can be dealing with some awful bitch when all of a sudden her eyes will soften. She can’t resist the generosity of the capacity to care.

“If you sit at a dinner party, four men and four women, the women, getting drunk, turn in on themselves. They become meditative. Whereas the men,” he pauses, and acts out raucous behaviour. “My idea of hell is an eternal dinner party of just men. And I’m sitting at the head of the table watching these guys.” Shuddering, he drains his second glass of wine.