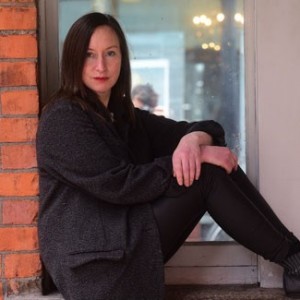 Joanna Walsh rushes into the hotel for our interview, telling me she’s just come from the Irish Writer’s Centre. As well as publicising Vertigo, her latest collection of short stories, she’s in Dublin interviewing people for the upcoming Irish issue of Granta.

“I wanted to talk to, not just Irish writers, but the people who create the structure behind that success,” she says, naming The Stinging Fly and Gorse literary journals, the grant system, Aosdána, and her publishers, the innovative Tramp Press.

Then, turning her attention to her own work, she throws herself down, wrinkles her brow in concentration, and launches into forty-five minutes of rapid fire talk, barely pausing for my questions.

Her passion for writing, her intensity and seriousness for her craft, and her sheer almost overwhelming intelligence, come as no surprise. Vertigo, a quite extraordinarily accomplished piece of work, could only have been written by someone with exceptional skills.

Spare in style, the stories are far from conventional; they reminded me a little of Pond, the debut collection from Clare-Louise Bennett released last year; different in their approach, they engendered in me the same heady absorption, and constant food for thought.

“I do a lot of events with Claire-Louise,” says Joanna. “We’re paired frequently. She  is writing about a woman on her own and I write about a woman in relation to her family role, as mother, daughter, wife, but we do have things in common. We both use internal monologue, and we share an interest in how we create subjectivity through language.

“My work is to do with the absence of words. I am essentially a minimalist in my writing. I use short words, and I am interested in the unsaid, and in working with the reader so that they can fill those gaps for themselves. I’m interested in presenting rather than drawing conclusions. Then people can draw whatever conclusions they want.”

Just how does she set about writing the stories?

“All my writing comes from my diaries,” she says. “I write notes or a turn of phrase. But do I get irritated when I go back to the diaries, because I don’t know what country I am in or what I am doing; that’s not what I write down.

“The notes start coming together into clumps; I put those down and see how they look together. I shuffle them and cut and paste. It’s like writing from outside. I write down what I want to write about and narrow it down and narrow it down and cut until I have got something, and then make connections between those parts. It feels like shuffling cards. It’s the way you deconstruct and reconstruct.

“I like writing to examine and grapple with things. I’m trying to get language to fit around very complicated ideas; trying to bring words to those things which are in themselves quite abstract and have a system of their own.”

It’s all so wonderfully well done. Whether she is writing about that tension between adult daughters and their mothers,  or of, wandering, aimlessly around a literary festival, always feeling one should be somewhere else, the reader will delight in recognition of the sentiments she evokes. She’s terrific on motherhood, too.

“Motherhood is such an impossible ideal to live up to. It has such an impact on women’s lives, but makes them feel a failure in some way. In many ways it’s not compatible with the idea of independence that we have been brought up to. That other idea, of Western Individualism is pitted against the idea of motherhood and it makes it very difficult for women to consider themselves as human beings.”

Joanna came relatively late to writing. She read English at Oxford University, then she worked as an illustrator, in newspapers and for book publishers.

“I resisted being a writer for a long time,” she says. “I didn’t feel I had the authority to be a writer and I couldn’t see a space in which to do so. I started writing seriously when my marriage was dissolving. It was a traumatic period, and one in which I thought, I have so little to lose here.

“I had no connections. I don’t come from a community of writers, and I didn’t go to writing school or a University writing course. I was writing in this weird way which is not standard,  and it wasn’t like the writing I saw in bookshops or newspapers.”

Her first collection of stories came out with a small press, in 2013.

“It went under the radar, but had a nice review in the Times Literary Supplement.” She followed that with a book of essays called, Hotel. “That was based on a time when I was a hotel reviewer and my marriage was dissolving.” Pausing, she says, “Dissolving is a funny word, isn’t it?”

Described in the blurb as a memoir, she refers to Hotel as Auto-Fiction.

“I like that term,” she says. “It describes where someone inserts themselves into a fictional narrative as a character, but what I am interested in is telling a thing about personal experiences using a variety of techniques more closely associated with fiction.”

Passionate about women writers, Joanna created the twitter hashtag, #readwomen, aiming for equal treatment for women writers. It’s been the greatest success. She lives in Oxford, a city, she says, oddly devoid of writers.

“It’s a myth that Oxford is a writer’s city, except for people connected to the university. Writers live in places like Norwich and Brighton, and, of course in Dublin, Cork and Galway.”

“I love being involved with all the stuff that goes on in Irish publishing. I’m thrilled to be published by Tramp Press; And the journals are far more thriving that those in the United Kingdom. I love the support organisation give writers, and the support writers here give each other. It’s like what Anne Enright said on Mariella Frostrup’s book programme last year. ‘There is no VIP room here.’”

She adores reading her work aloud.

“Reading is a private pleasure, which you can do silently, but I love the space between the listener and the reader. I love the sounds. Writing needs to sound right. I leave things in which are ungrammatical, and I use Americanisms. I do all sorts of things that are unorthodox because I want the writing to sound right. That is the most important thing to me.”

Next up, though yet to find a publisher, is a book of essays based on love and the internet.

“I am interested in that nebulous space created for relationships on line and the difficulty of bringing anything to an end. You can go to the other side of the world or move house and that person is still there.”

“I’m really excited about that,” she says. “It’s for innovation in writing form, and when that is promoted, publishers start looking for that kind of thing. Kevin Barry won it last year for Beatlebone, which I loved. We read twenty novels in two months, and I am not a quick reader, but I am excited about what we might get.”

Joanna’s writing has been universally praised, yet my enthusiasm clearly pleases her. Breaking into a smile, she says I have read her work well.

“I still get excited when I make a connection with someone. I never get over it. The first time I got a good review there were tears in my eyes. It was very moving to me.”

Vertigo by Joanna Walsh is published by Tramp Press €10.

Published in the Irish Examiner on June 11th.