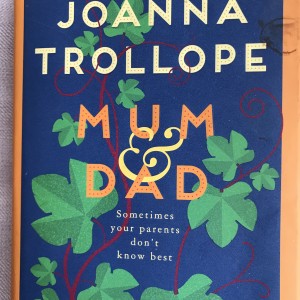 The latest novel from Joanna Trollope, Mum and Dad, is set, mainly in Spain. Monica and Gus relocated and started a vineyard there, but now Gus has had a stroke, and their three grown children, all with families of their own, realise they haven’t escaped from their ties of responsibility. A multi-generational novel, it shows how far the expectations of women have come.

“Monica was of the generation brought up to follow a man,” says Trollope when we meet in Dublin. “She basically followed the drum. It was very much in her head that it was her job to support Gus in whatever he wanted. And so she did. Two generations later, Daisy wouldn’t think of not working.”

At 76, Trollope is now older than the fictitious Monica, yet in outlook she is more like Daisy. Having always worked, she has lived, happily, on her own for the past twenty-five years having walked out on not one, but two husbands – something very much frowned on at the time. When her marriage to the screenwriter, Ian Curteis broke down, it led to a media frenzy.

“I was pilloried. And the fact that I had walked out for ‘nobody’ made it much worse. I couldn’t even offer the excuse of having fallen for someone else. Nobody criticises a man for walking out of a bad marriage,” she says, “but women are supposed to be endlessly self-sacrificing. I love living on my own.” Isn’t it sometimes lonely? “My idea of loneliness is an intimate relationship that isn’t delivering.”

Gus is a real curmudgeon – used to getting his own way in everything. He wants his elder son, Sebastian to take over the vineyard, but his younger one, Jake, has other ideas. His remote, sometimes antagonistic relationship with his children is in stark contrast to that of the men of the next generation.

“With them, there’s that gentleness,” she says. “A tiny child, these days, is as likely to run to its father for comfort as to its mother. I think society now permits men to say that they long for a baby.

“My generation of men had to pretend that they really didn’t want children. I had to say to the father of my children that he really must stop boasting about never having changed a nappy. You’d look like a dinosaur if you did that now.

Talking of this, and of Gus’s misogyny, leads to a discussion about the ‘Me Too’ movement.

“When I was growing up there was that thing about not saying your cleverness because it was regarded as off-putting to a man.” She sighs. “It was completely accepted that it was amazing to be noticed by a man. You should be grateful and thankful and give him exactly what he wants which is exactly how we have got to the Harvey Weinstein thing.”

In the novel, Monica finds redemption when, staying in England with her daughter’s family, she is able to befriend and help her troubled granddaughter.

“It’s a cliché, but they often say that a grandmother and grandchild get on well, because they have a common enemy in the mother.”

Trollope, who, managing to remain close to her stepsons as well as her daughters, now has nine grandchildren, and loves this special role a grandmother can play.

“I see all my grandchildren regularly, and we all have an excellent relationship. It shifts all the time – you have to let the babysitting stage go and start again with adolescent grandchildren. You’ve got to be their friends – somebody whom they can confide in.”

Mum and Dad is Trollope’s eighteenth contemporary, issue driven novel. She wrote six historical books before changing genre, and has written another two since. She says she feels lucky that she started her writing career before the financial director was the one who steered a publishing company.

But it wasn’t until her fourth contemporary novel, The Rector’s Wife spent about 50 weeks at number one in the book charts, and The Choir was televised, that she became a household name; her success even creating a new genre – known quaintly as an Aga Saga.

The eighteen novels have covered so many life situations from blended families, to the wives of serving soldiers. How does she pick her subjects?

“Ideas are like planes waiting to land. There are quite a lot of them in the sky and they might be up there for some time before they land and I can see where they should go. I might have ideas about various situations but it’s not yet the right moment to write about it, and that’s an instinctual thing.”

The idea for Mum and Dad came to her about two years ago.

“It was really a questions of seeing what everyone was concerned about, and that was the sandwich generation. I just want to start the conversation. It is so much easier for the English to say, ‘Have you read Mum and Dad,’ than ‘what are you going to do about your elderly parents or your self-harming teenager?’ I don’t want people to feel like freaks. I’m saying, ‘We’ve all been there.’”

Does that mean her objective in writing books is to make people feel better?

“Very much so,” she says. “That’s why they’re quite psychological. It’s ‘Everybody’s life is just like this, and there is always someone who is much less fortunate than you.’ That’s why I want to write.”

We discuss the characteristics of the warring adult siblings, Sebastian, Anna and the hapless Jake. During the course of the novel all three have to reassess their lives – and, all find a new, and in most cases better reality.

“I know a lot of driven career women like Anna,” muses Joanna, “but her self-revelation and change of heart was very painful for her, I think.”

It feels as if we’re talking about real people; are they real to the author?

“Well, they are real, in that they are composites of perhaps ten or twelve people- and all I’ve done is put those composites together. I’m the ringmaster for, perhaps the first two thirds of the novel, and then they tend to take over.”

Whilst she no longer gains pure joy from writing, saying, “I’m no longer writing from a full tank,” she does feel that it gives her life full meaning.

“The business of living is still energising, but would I think that if I was not creating? I think earning one’s living gives one a sense of dignity. But I don’t know how life would feel if I didn’t have that. I suspect life would be very empty. I think that would be hard.”

There’s another book in the pipeline.

“But I can’t talk about it because it’s a work in progress. The idea has been circulating for some time, waiting to land, and I think, post Brexit will be the right time to write it. I have started it, but it hasn’t got much further than that.”

Retirement is far from her mind.

“If you’re a creative, you go on forever! I remember visiting PD James a couple of months before she died, aged 94, and finding her working on an Adam Dalglish novel. And she was going to write another!”

Published in The Irish Examiner on 28th March.