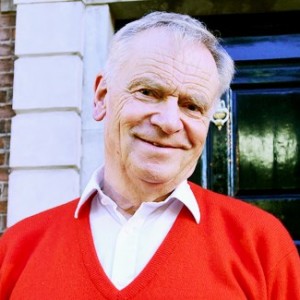 A renowned scientist, she gained a double first, and taught at both Oxford and Cambridge, before running an NHS hospital. Honoured as a Dame, she was the first woman, ever, to chair a national museum or gallery.

Taught by the same chemistry teacher as Margaret Thatcher, Mary, like the former Prime Minister, gained an Oxbridge scholarship, and the two adored each other. And that can’t have done her politically ambitious husband any harm at all.

“We both adored Margaret,” says Jeffrey, who famously served under the Iron Lady.

The couple have had their health difficulties. Both have suffered cancer; prostate in Jeffrey’s case, bladder in Mary’s, but are now in robust health.

A former sprinter — Jeffrey ran for Great Britain and he still works out with a trainer three times a week.

Sitting opposite me in an open shirt and bright red jumper, Lord Archer is clearly in good shape; only his wrinkled brow betraying his 76 years.

He’s noticed elaborate tiers of cakes pass our table in the Merrion Hotel, and has requested one, but it’s taking time and he’s getting impatient. Whilst we’re waiting he asks for a glass of milk.

Once described by a judge as ‘Fragrant’, Mary has stood by Jeffrey through the successes, and the many upsets in his life; the near bankruptcy, with the resultant political fallout; his years in prison and that whiff of sexual scandal.

“Someone once said to her, ‘have you ever considered divorcing Jeffrey?’ And she said, ‘Good heavens no! But murder…. Several times!’” I’ve read that Mary thinks fidelity doesn’t matter. That loyalty and friendship are more important.

“Yes, I think that’s right,” he says. “She’s said it to me. And I am loyal. It’s the reason I have so many friends.” Does that work both ways, I wonder? Would he put up with infidelity from her?

We’ve met to discuss This Was A Man — the seventh — and final volume of the ‘Clifton Chronicles’, started when Jeffrey was 60, and wanted a project. It features an extended family mired in politics and high business.

I hadn’t read the previous six, but thoroughly enjoyed this last one. It’s full of sometimes totally unexpected twists, but is written with such authenticity.

Whether he is describing speeches in the House of Lords; the interior of Buckingham Palace; the boardroom or the visitor room of a prison, Jeffrey is writing about what he knows.

The book centres on Harry and Emma Clifton; he the writer, she the chairman of a hospital, who is, unexpectedly offered a job by Margaret Thatcher. She is pitted against her brother, Giles Barrington, a labour minister and acclaimed orator.

“I am Harry, and Mary is Emma,” says Jeffrey, but he agrees that there is a lot of him in Giles too.

Above all, the book is a homily to the strength of family. And it’s clear that this springs from Jeffrey’s experience. He didn’t know his father well — he died when Jeffrey was 11, but he adored his mother, and talks fondly of his sons, daughters-in-law and grandsons.

The book is dedicated to his granddaughter.

“She was born in November — my final desire to have another woman in my life. I said, ‘if you call her Boadicea I will give her everything in the world,’ but I lost that one.” He chuckles.

There’s a line in the book that jumped out at me. ‘The Irish said he wasn’t a real writer, but a seannachie.’ Does this assertion grate with the author?

“Not at all. I am a storyteller,” he says. “And I’ve been waiting years to use that word.”

Twenty years ago, he tells me, he was on his way to a book signing in O’Connell Street in Dublin when he encountered a tramp sitting in a corner, reading the Financial Times.

The man hailed him and said, “Ah Jeffrey, is there any Irish blood in you?” When Jeffrey replied that there wasn’t the man expressed surprise. “I find it hard to believe,” he said, “Because you are a seanchaí.”

“I’d never heard the word,” says Jeffrey. “I had to ask my publicist what it meant.”

He was thrilled when, in 2014, Ireland honoured him with the inaugural International Bord Gáis Energy Book Award for services to the publishing industry, and swears that he doesn’t mind that the literary society will never consider him for the Man Booker Prize.

“Someone put it very crudely the other day. They asked ‘Would you rather have a Nobel Prize or have 277 million copies sold?’ And that doesn’t need answering. But I do feel a bit, when people say, ‘He’s not a writer’, that they haven’t read me.”

Picking up his mobile, he reads a string of messages from fans.

“‘Have loved the whole series’, ‘an outstanding finale’, ‘a brilliant writer’. This isn’t just the odd one,” he says, looking up. “That is what real people say.”

There have been many messages from men, saying that the book made them weep. “I find that extraordinary,” he says.

The 100th edition of Archer’s biggest seller, Kane and Abel is about to be released. According to Google, it’s the 11th most successful novel in history. One below War and Peace, one ahead of To Kill a Mocking Bird. Fiercely proud of that, Jeffrey keeps an eagle eye on his sales.

Even so, he considers himself one of life’s failures.

“I’d like to have made the English Cricket Team, but that was a disaster, because I couldn’t bowl, bat or field. I’d like to have done much better in politics. I think if you are an ambitious person you die having failed, so it’s not a bad thing to keep wanting something that you cannot get.”

Never shy of hard work, Jeffrey rises at five every day. He put in his two hours this morning, before appearing on breakfast time TV, and got one lovely twist as the pen hit the page. That, he says, happens remarkably often.

“In one of my early books the wicked character, Virginia is suing Emma. I wanted Emma to win, and put Virginia in the witness box against the most brilliant Queen’s Counsel (QC). My plan was for her to be slaughtered.

“The QC asked her a question and she batted it off. He asks another and she batted that off too. She took over the next three pages and flattened the QC. I did not plan that, and didn’t know where I was going next.”

Harry is working on an epic book — one that he hopes will cement his reputation. Is that Jeffrey’s intention too? “Yes,” he says. “Everything you have read in the book I have now started. I think the plot is the best idea I’ve ever had in my life.”

His ambition is to be thought of as the best storyteller of his age. “A lot of people say it, which is kind, but I would like it to be.” electing a smoked salmon sandwich from the cake stand, finally delivered, he says.

“I want to get higher than War and Peace!”

He still takes an avid interest in politics. He dined with a cabinet minister earlier in the week, and is able to talk to almost everyone who matters in political circles, but does he wish he were still involved?

“Of course! I like the centre of the stage,” he says.

Where does he stand on Brexit?

“I was Remain, Mary was Brexit, so we were a divided house. That was the closest we ever got to divorce!”

Published in The Irish Examiner on 28th January, 2017