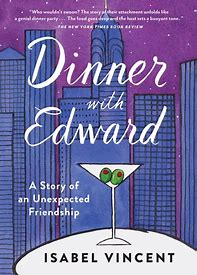 When Isabel Vincent’s friend Valerie asked her to look in on her father, Edward, and have dinner with him, she didn’t know what to expect. She knew the nonagenarian was depressed – that his wife had just died, and that their marriage had been all consuming, but she agreed in order to reassure Valerie, who felt bad about leaving her father return home to Canada.

Isabel’s life was under enormous stress at the time. A highly respected and seasoned investigative journalist from Canada, Isabel had reported from Brazil, and written several highly praised investigative books, but she was finding it hard to adapt to the cut and thrust of The New York Post. Her marriage was unravelling, and she was worried about the effects of that on her small daughter.

But she fulfilled the promise to her friend, walking to his apartment on Roosevelt Island, and was met with a perfect martini. A wonderful dinner, carefully chosen, and served with loving care followed, and the conversation flowed. From that first dinner with Edward, Isabel was enchanted by him, and a warm friendship rapidly formed.

“He was so full of life, and in a way younger people- people my age weren’t,” she tells me on the phone from New York. “Nobody in New York City cooks, and here was a guy who not only cooked but cooked brilliantly. And there was no mystery about it; no arrogance. He would go and find the best ingredients that he could afford. And if that meant walking Manhattan he would do it. That devotion became an art form for him.”

The weekly dinners, for such they became, were about much more than the food. An excellent confidante, Edward was brilliant company, and told many anecdotes, but he was caring too. Worried about his new friend, he would gently counsel her, and offer advice as her marriage finally crumbled. Soon, the friendship was so close, that it spoilt Isabel for other men.

“Id be comparing them to Edward, and finding them lacking.”

She loved hearing of his life – and of the love he had for his wife.

“One day Edward pulled out all these scrapbooks that he had that had kept for almost 70 years. There were letters that he and his wife wrote to each other, and racy cards. He once said to me, ‘what’s going to happen to all these scrapbooks when I die?’ And I said, ‘You know what? I’m going to write about you..’”

Edward didn’t take her seriously, but she began, and it helped her with all her marital and work issues.

“I would get up really early to write, and get lost in the writing. I became a reporter because I wanted to find the truth, and in a way, a memoir is not so different. It was a hard exercise in telling the bits of myself, but whereas my other four books were a real struggle to do, this was most enjoyable.”

Through Edward, Isabel became passionate about food and cooking – she follows his advice and recipes to this day – but his old-fashioned ways influenced her in other ways too.

“He was trying to teach me how to go through life, and what you are doing and what you could be doing better. And always with the end of being a strong woman, because he had seen so many good women pushed down in life.”

Edward didn’t have a cell phone, or a computer.

“He wrote by hand and there was something so nice about that. As a reporter I was trying to get an interview with a former Governor of New York who has been caught with a prostitute in a Washington Hotel Room. He wasn’t answering his phone, so, thinking of Edward, I actually wrote a letter, put on a stamp and mailed it, and I swear, two days later the former Governor was on the phone. It was such a shock to him that someone would do that.”

Edward saw the finished book, and although he loved it, he didn’t feel that it would be of interest to anyone else. Sadly, he didn’t live to see the book published, and to know how very wrong he was in his estimation. Because Dinner with Edward has become a publishing sensation. Published in seven languages, it’s to become a film starring David Suchet.

And no wonder!  It’s a gem of a book. Heart-warming, sincere, and cleverly conceived. Each chapter lists a menu; and the cooking and eating of each menu is lovingly described. Whilst reading of this extraordinary friendship, one picks up culinary tips – and it’s not all reserved for gourmet food. I now have a new, cast iron method for cooking scrambled eggs.

Isabel was nervous of Edward’s family’s reaction to the publication. Would they feel that she had tried to hijack their family memories?

“His other daughter was away in Greece at the time, and I didn’t know her at all. I thought I might have overstepped the mark, and when she saw the manuscript, she said, ‘It’s a good first attempt.’ It was my sixth draft!

“But a year later, she saw a notice on the internet that the book was coming out and she sent me an email and said, ‘I think we need to have a party, and that’s what we did. Edward had died the year before, and they hadn’t had a memorial service. They turned the book launch into a memorial service for Edward, and over 100 came in from Roosevelt Ireland.”

The launch gave Isabel new insights into the man she had grown to love.

“Everybody had had dinner with Edward, and there was I thinking I was the only one. They all had a story. One woman stood up and said, ‘I moved into the building a few months before Edward died – I was his neighbour. I had broken my leg, and Edward knew I had. And he came over with a plate of food. I said, ‘That’s so sweet but my mother’s here. She’s taking care of me.’ So Edward comes back a few minutes later with another plate of food. He said, ‘For your mother.’’ That was the kind of man he was.

“When I think of Edward, my image is of this elderly man with liver spots who is very fragile, and is walking around with a cane, but is also talking about his favourite playwright, Tennessee Williams; and about the world, and doing it with this piercing intellect.”

And, of course, she remembers his famous martinis.

“Edward didn’t have a cocktail shaker. He had an old glass bottle and he mixed the vermouth and gin in that bottle and put it in the freezer. I think of him zesting a lemon, and taking it out, and also taking out the frozen glass, and this concoction in the bottle and pouring it, just as I arrived at his apartment.

“His daughter, Laura, who is now living in his apartment does martinis so well. Every once in a while she will call the old neighbours, and me, and we have dinner and she will make the martinis. We talk about Edward. That’s not the object of the evening, but comes out because he touched so many people. As his Polish neighbour, Rita says, ‘You came to Edward for the food, but mostly you came for the stories. That’s what you got over dinner.”

Dinner with Edward. A Story of an Unexpected Friendship is published by One Publishing. €15.99. Kindle: €7.10.

Published in The Irish Examiner on 14th December 2019.