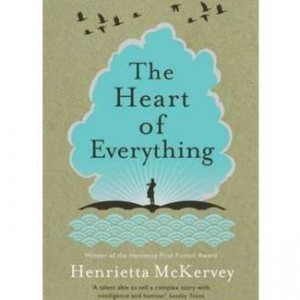 Mags Jensen’s memory isn’t all it was. And although she hasn’t, yet, got a diagnosis, both she and her doctor fear that her many lapses herald the onset of dementia. Her elder daughter, Anita, who, living close by, accompanied her mother to the consultant, decides to keep the news to herself, rather than worry her two absent siblings.

One morning Mags sets off on a few errands, and she doesn’t return in time to meet Anita, as planned. At first simply annoyed, Anita then worries, and rings her brother, Ray, who, eventually, agrees to travel to Dublin. He contacts the youngest, Elin, who flies in from Scotland. As the hours grow into days, and a Gardai and local search fails to find Mags, the trio go into a tailspin of panic.

In her second novel, Henrietta McKervey uses  this premise to explore the fractured relationships within the Jensen family as they spend extended time together for the first time in years.  Flashing back to the siblings’ childhood, we learn how the alliances, formed back then, have changed with the onslaught of adult life.

Anita, Mum of teenage twins and a smaller boy is the most outwardly troubled. Increasingly distraught, she fights with everyone; railing at the Gardai and her siblings, in a need to blame someone else for her mother’s disappearance.  The least likeable of the three, Anita is shown to be all too human. Perpetually on a diet, she unthinkingly chomps her way through packets of chocolate biscuits.

The passive, but lovable Ray, turns to drink under pressure, drowning himself in pints. This is typical behaviour from Mag’s favourite child, who works in a library. He has a vague ambition to write screenplays, but can never quite get round to starting, and, unable to stomach confrontation, bumbles his way through life, never committing to anything, least of all his feisty girlfriend, Jean.

‘He plods along, and even when he does begin a new chapter, the content will essentially always be the same. His dust jacket just gets dustier.’

The worst family friction falls between Anita and her younger, rather enigmatic sister. The two fell out some years ago, and haven’t spoken since. Will Anita make her peace with Elin? And if not will the younger girl be able to forgive herself, in order to construct a happy future?

Mag’s neighbour, Liz, makes her shop, Best Buds, the headquarters for the search. When it  transpires that Liz, as Mag’s main confidant, knew her rather better than her own children did, the three are nonplussed. They don’t recognise the interesting, always friendly woman known to her neighbours. But the media’s view of their mother doesn’t match their picture of her either.

‘Whoever his mother had been before this week, her character is rewritten entirely by now: in the eyes of the country she is an old woman, alone and crumbling, scared and lost and lonely.’

With her keen eye for detail, and her flair for words, McKervey has taken this important issue, to create a page turning novel with real substance.  The book is not self consciously literary; there is too good a plot for that, but it’s the characters who drive the action.

McKervey’s debut, out  last year, based around the Easter Rising celebrations of 1966, also dealt with the issue of domestic violence. Beautifully realised, that book showed that she was a writer to reckon with. This second novel confirms her place as one of Ireland’s up and coming writers.

The Heart of Everything by Henrietta McKervey is published by Hachette Ireland: €17.99. Kindle: €11.31.