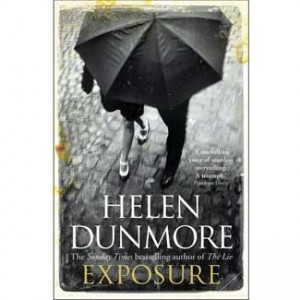 When we think of England in the sixties, it’s the Beatles that spring to mind. We remember swinging London, and Carnaby Street; the mini skirt and a time of liberation; but when that decade began, things were altogether more drab.

In 1960, when Helen Dunmore’s latest novel commences in the cold war is at its height. There’s real fear of the Russians, and the threat of a nuclear war, yet memories of the second world war still loom large. And the atmosphere of the time – of fear, but more freedom for children to roam free, is quite wonderfully conveyed.

“It’s fascinating embedding people in their time,’ says Helen Dunmore, on the phone from England. “The sixties might be far away, but it feels so close to some people. There was a very different moral code back then, and different assumptions. I have to keep reminding the reader that this is not now, it is elsewhere.

“In 1961 there was the sense of the hot war of World War Two drifting very quickly into the cold war. The enemies were different but there was still that sense of surveillance and overhearing. The Soviet Union was now in the place where Germany had been, and although deeply feared, I don’t think the British population had quite the same visceral feeling towards Russia.”

The mightn’t have hated the Russians quite as they had the Germans, but there was a massive sense of fear – and that theme runs through the novel.

“I don’t think the spy scandals make sense to people now, unless they understand how very afraid people really were. They did, genuinely believe that they could be obliterated very quickly.”

At the start of the novel Giles Holloway, a once successful double agent, has an accident whilst in possession of a classified file. He calls the younger colleague at the Admiralty, Simon Callington, asking him to collect the file and return it before it’s disappearance is noticed.

Feeling compromised, Simon takes the file home, whilst working out what he should do. And that leads to his arrest, accused of spying. His wife Lily, a Jewish refugee who arrived in England having fled Germany at the start of the war, suspects a cover up. Desperate to secure the safety of her children, so that they will not have to suffer the hate she felt directed towards her as a child, she flees to the Kent Coast, and takes centre stage in this story.

With a special interest in the history of war, Dunmore likes to show the affect of great events on women and children. Her first of fourteen novels Zennor n Darkness, explored the events leading to DH Lawrence’s expulsion from Cornwall during the First World War, suspected of spying, and her two previous two novels, The Lie and The Greatcoat concentrated on the survivors of the two world wars.

But what drew her to the subject of this latest novel?

“I started, years ago with an exchange between Giles and Simon, and I thought, there is much more to say here. Then the character of Lily came to me.

“Lily lost everything as a child, and when Simon is arrested she fears she might lose everything she has built up so carefully and slowly. I wanted to show that everything we construct is very fragile. We can destroy our relationships with home and the sense of security we have built up can be easily dismantled.

“Lily is seen as difficult to know, because of the profound depth of control ahs has to employ in order to survive. She, and each of the other characters are forced beyond themselves to discover resources and depths within themselves.”

Exposure in a wonderful read; literary, yet page turning, and laced with humour. With complex, beautifully realised characters, it’s the best I’ve read all year.

Born in 1952, Dunmore can remember the early sixties, and her vivid portrayals of Lily’s children, Paul, Sally and Bridget, are infused with authenticity.

“I wanted them to be big characters. Even someone who comes in for two pages needs to earn their place.”

I loved the feeling of helplessness Giles feels, in his late forties. Recruited at University, seduced by the glamour of the spy’s life, and passionate about the ideals of Communism, he has sunk into a lonely, heavy drinking middle-age, fearing exposure, but reluctant to defect.

“For Giles,  it’s a bit of a pain that the government have done good socialist things; that some of those things he supposedly longed for have come to pass. He has completely lost touch with the kind of society he was trying to create through his activities, and is half heartedly passing on information for its own sake, and because he could not get out of it.

“He is trapped, and is becoming more ramshackle, more forgetful, and has a strange desire to dance on the precipice. He is courting disaster, but can’t help himself.”

An award winner, Dunmore has always received good reviews, and some critics have described Exposure as her best book yet. It has been a long, varied career that has built up slowly. And that is something, she feels, that is harder to achieve for someone starting out today.

“Publishing has changed. There isn’t always the patience about developing writers, of expecting more with this book and a little more with the next. A career as a writer should be a long thing. You need to sometimes write books which are not commercially successful if you are to develop as a writer, or which will find a handful of passionate readers. But we now measure things in a different way.”

One of four children; stepmother to one, mother to two, Dunmore has written since she was a child. At 21, she began publishing poetry in literary journals. She moved through short stories to children’s books, and finally adult novels.

“Poetry is such a strong driving force,” she says. “If you write poems you can do things with language that translate naturally to other forms of writing.”

Fond of criticism, Dunmore is currently writing the new introduction to Virginia Woolf’s Orlando. She loves engaging with someone else’s writing in an imaginative and critical way, and has written introductions and criticism of Tolstoy and Emily Bronte, amongst others.

“It is so stimulating, realising just how good those writers are. When you look at absolute masterworks asking, how does this happen, or what way is the language used, your thoughts are illuminated.

“You can’t be a writer without being completely engaged with what other writers do and what they have done.”

The editing on Exposure finished a year ago, but the character remain fixed in Dunmore’s mind.

“They don’t vanish. I can see them. Writing a novel is as much a process of cutting away as adding, and I think of all the stories that I have decided not to tell.”

The inaugural winner of the Orange Prize, Dunmore has several awards and short listings to her name, but it’s not such accolades that drive her.

“My drive is to write the next book and the next. It’s great to win prizes but I have seen the destructive effect it can have on people being disappointed and a bit embittered. It’s all so arbitrary.

“Writing is so much a part of me. It’s a vocation. There is nothing better than the moment of writing. It’s a feeling of being fully alive. Others get that from painting or playing an instrument. No matter what the disappointments when a book does not succeed, or come out as I would wish, I would not have wished to do anything else.”