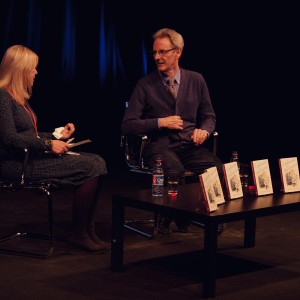 Andrew Crofts was charming, amusing and incredibly informative when I chatted to him in the Pavilion Theatre in Dun Laoghaire at the Mountains to Sea Festival last Saturday,  21st March. Ghost Writer of over 80 books, he has been known to have a clutch of best sellers in the book charts at the same time.

Here’s an interview I did with him in the Autumn, last year.

When Robert Harris wrote The Ghost – based on a ghostwriter who is working on an ex Prime-Minister’s memoirs, the hack’s experiences come across as pretty true to life. And that’s because Harris  ‘borrowed’ from the writings of the true life ghostwriter Andrew Crofts. Harris actually started each chapter with a snippet from Crofts’ guide, Ghostwriting.

“I thought Harris caught the world of the ghostwriter really well,” says Crofts, on the phone from London. “As a ghostwriter you get sucked into your client’s world for a few months and become their best friend and workmate, but then you move on to the next one.

“When Polanski filmed the book of ‘Ghost,’ substituting Martha’s Vineyard for a remote island off Germany, I was doing a book on a client’s private island off Bermuda. I thought that was poetic.”

Andrew Crofts has been working as a ghostwriter for some thirty years. He has penned over 80 books, and commands fees of £100,000, or, sometimes more. Often writing privately for corporations, he has tackled just about every story, from a transsexual hooker, to the leader of a country.

And he has now decided to tell all. His new book, Confessions of a Ghostwriter is packed full of funny anecdotes, and stories of the rich, famous, ordinary, and not so ordinary.  Of huge benefit to anyone who wants to be a ghostwriter, or to employ one, it will appeal to the general reader too.

But just how does Crofts set about ghosting someone’s memoir?

“The ideal is to sit down with someone in a huge block. If you have two or three days with them in conversation, and drain them, so that you have between ten and twenty really good hours on tape, you can then go away and write the book in a fairly short time. Once you have all the material you can do a book in three months

“I like to start the book from memory. I sit down and spill out my opening for the story, because the opening is the hardest bit. I go on as far as I can, then I go back to the tapes because I will have misremembered stuff. I’ll do a bit of Googling, and I may go back and rewrite the start. But by that stage I will have got the voice.

“The other hard bit is when you have told the story, but you have got to keep going because you’ve been commissioned to write a certain number of words,” he says. “That’s when you go back and add bits, trying not to spoil what you achieved in that first flush of enthusiasm.”

Sometimes Andrew takes a chance on a book. He was contacted by Zana Muhsen, who had been sold, along with her sister, as a child bride to the Yemen. Zana’s sister, along with their children were still in the Yemen, and she wanted her memoir to draw attention to their situation.

Writing a synopsis for free, Crofts found a small publisher and secured a tiny advance. But then things snowballed. Publishers around Europe bought translation rights, and the book has now sold five million copies around the world.

These days, ghost-writing is becoming understood. Even literary writers like Roddy Doyle are trying their hand at it. But why, back in the days when it was considered a second rate form of writing, would Crofts, be attracted to it?

“It strikes me as much better than sitting in your garret trying to think up fabulous plots when you haven’t any life experience,” he says.

“You are meeting people in the publishing industry, making contacts and networking; you are practising your writing skills and you out there gaining fantastic experiences,  gathering material. You get into your Magdalene Laundry or onto your private island; it’s a great way to live.”

The craft appeals to Crofts because he’s curious about people, and loves being invited into their lives. The idea of it first came to him when he read The Great Gatsby and realised he envied the narrator, Nick.

These days he will only work on projects that really interest him. But that wasn’t always the case.

“I wrote fifteen misery memoirs,” he says. “It was in an ‘Oh my God I have to make money stage,’ when my four children needed supporting. Were it not for that, I would probably have stopped at four or five. I had satisfied my curiosity by then.”

To be a good ghostwriter, you should be a benign presence,” says Crofts. “You must not be threatening on any level because you want them to be relaxed and comfortable. Journalists don’t always make good ghost-writers, at least not if they hold strong opinions. Anyone who writes an opinion column would want to interrupt the whole time,” he says. “That would prevent the person from telling the story.”

In fact it helps if you are naive, and live in some kind of Walter Mitty land. Because Crofts has got himself into some near scrapes at times. Like the incident when a hit man suggested a remote venue; or the time he was held under armed guard in Lahore.

“I found that exciting,” he says. “It’s only afterwards when my wife will say, ‘You did what? Are you insane? You can’t do that,’ that I realise perhaps I had cause to be scared. I think, ‘Yes, I was in danger.’ I can be a bit dim.”

Confessions of a Ghostwriter by Andrew Crofts is published by The Friday Project.