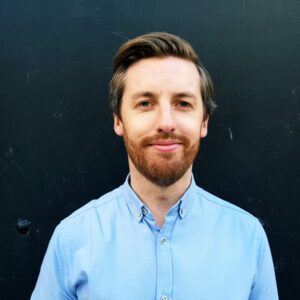 Freddie Alexander is not a typical children’s writer. The 35-year-old Dublin based solicitor was not a bookish child; he rarely reads these days – saying he simply doesn’t have the time, and there are no appropriately aged children in his life. You’d think he didn’t have the recipe for success. Yet his debut children’s novel has everything a child could desire; it’s funny, sometimes dark, exciting and adventurous, and as a bonus, has elements that would appeal to adults tasked with reading the book out loud.

Alexander does, however, have some natural advantages. He has a fertile imagination, and a strong desire to create something; he has a friend who’s happy to bounce round ideas with, and an incredibly supportive wife who has some editorial skills. He has friends in the publishing industry too.

He also has a human alarm clock in Rafe – the 10-month-old whom he adores.

“I set the alarm for 7.00 am every day,” says Alexander when we meet in a Dublin café, “but I’ve never once slept that long. Rafe always wakes very early. We get up and play with him for a while. He is great company – a really fantastic kid.

“I write for an hour every day – and if possible, I write in the office before work. I’m usually at my desk by 7.30 am.  I find the time limitations a very useful tool for focusing my mind. It’s almost like meditation. I go into this world and get it onto the page. And when 8.30 comes I’m properly awake for work.”

Son of a lawyer, Alexander decided to become a solicitor towards the end of his International Arts degree – in Economics and Geography.  It’s a job he enjoys to a point – but it doesn’t feed his intense creative urge.

He has been writing sketch comedy since he was a teenager – and it was his wife, Zelda, who suggested his time might be better used if he attempted a book for children.

“She said it would suit my rather odd, childish sense of humour,” he says with an ironic grin.

A solicitor who was deputy editor of the UCD newspaper, The Observer, Zelda’s instincts were absolutely right. There’s a certain Roald Dahl feel about this fantastical debut.  Mr Spicebag features a 10-year-old boy, George, whose parents are so addicted to Spicebags, that they have their son running to the chipper at all hours. But why is the whole town addicted to spicebags? And why are such strange happenings going on? Is there magic in the mix?

“I got the idea in 2019,” says Alexander. “I was walking around town one day and saw a queue outside a chipper. It was a really long queue and an almost impatient one. Something clicked. I loved the idea of people being addicted to some sort of food, and Spicebags came into my mind. I thought of what spices can do; there’s room for magic. And I just went with it.

“I had a rough idea of the story in my mind, but it was important to allow myself to go off on tangents,” he says. “There had to be twists and excitement involved.”

Writing it, he imagined his 10-year-old self.

“At that age you’re happy to go along with the magic and adventure of a story. Every chapter, or every few pages I would go, would 10-year-old Freddie find this interesting or engaging, or would he put the book down and find something reckless to do?”

There were bad days; times when he thought he was insane to be attempting a children’s book, but he never put pressure on himself to succeed.

“That’s the key,” he says. “I don’t spend time worrying about rejection. What’s the point? There’s rejection in all walks of life, and I almost expected it. You’ve just got to go for it.”

His job as a solicitor has definitely helped his writing skills, he feels.

“It’s taught me how to write for certain people. Whenever I’m writing a letter, I’m writing it with the particular reader in mind. It might be to a highly educated person, or to someone who has little knowledge. The law is all about communication and that’s a useful skill.”

He started writing the book in October 2019 and finished the manuscript in the spring of 2020. Once it had won the approval of his supportive friend, and his wife, he gave the manuscript to another friend, Conor Nagle, who just happens to be a commissioning editor at Harper Collins Ireland.

Having warned his friend that a large part of his job involves trying to soften the blow of rejection, Nagle read the book, and, very pleasantly surprised, said he would hand it on to his colleagues for an independent review.

“That went well, and Harper Collins offered me a two-book deal.”

In another serendipitous moment, Harper Collins asked Alexander if he knew of an illustrator. He mentioned his friend, artist Helen O’Higgins, they approved his choice, and her gorgeous illustrations not only reflect the essence of the story – the humour and the dark edges but enhance the tale with addition details.

The second, stand alone book is now done, and submitted, and a third book is currently taking shape, but he has no plans to give up the day job anytime soon.

“It might be nice to have that option down the line, but there are only so many hours you can write. I think it’s important to have a balance and writing fulltime might affect my productivity,” he says.

While lockdown, in some ways, made writing easier – it’s well known that it’s been a trying time to have a baby, with fathers too often excluded. I mention this, but Alexander shrugs and says he was allowed into The National Maternity Hospital in Holles Street for Rafe’s birth last November.

“They were very good,” he says. “I was allowed in for the whole thing, and for a couple of hours in the days afterwards. When Rafe was born, it was odd. A lot of people say, ‘I broke down in tears from the joy, but it was so surreal. Like, oh, there he is, that’s my son, and I was holding him. I was relieved that the birth had gone well but did not find it an emotional time.”

Alexander is now as besotted as any first time Dad, talking tenderly of his son.

“I don’t know what I was expecting,” he says. “But I didn’t think I would enjoy spending time with him; he is wonderful to be with. It is tiring,” he concedes. “Weekends with him are wonderful, but they can be exhausting.”

Feedback on his debut, so far, has been excellent. Alexander is especially pleased when he hears that families have enjoyed reading Mr Spicebag together.

“The best moment for me, so far, has been Eoin Colfer sharing the book on Twitter and Instagram. There’s a photograph of him smiling at my book. I did a double-take when I saw that.”

Hoping 7- to 11-year-olds will love the tale, his greatest ambition is that his books be made into full length Disney movies.

“That would be amazing,” he says. “I see Mr Spicebag as a striking, long bony individual who is a witty, well-spoken character. A bit of a Fagin. I’d like to see Dohmnall Gleeson in the role.”

Published in the Irish Examiner on 11th December.