Posted by Sue Leonard on Saturday 30th May 2020 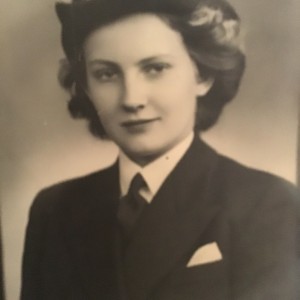 Joy was born in 1922 in Newcastle to Charles and Gladys Forster, a much wanted fourth child and first daughter. After a rich, if somewhat lonely childhood, spent between Wiltshire and her beloved Bamburgh, she left her boarding school having been head girl, but the declaration of war prevented her attending finishing school in Switzerland.

She became a land girl, then a WREN – serving as a Signals Officer in Stornoway and Liverpool before boarding the Louis Pasteur for trips to New York, and Egypt. By then she had married my father, John Almond, an officer in the Royal Army Medical Corps who survived Dunkirk, The Desert, and D-Day.

Post war, a GP practice beckoned, and they settled in Burghclere, near Newbury. There were happy, family years there, until his early retirement in 1977 – when they moved into Seaview House, on the Isle of Wight, fulltime.

Whilst my father – who co -founded the Seaview Yacht Club’s handicap class was the keenest of sailors, well known for his succession of Merlin Rockets, my mother wasn’t an enthusiastic crew. The long races in Hamble, and frequent capsizes had seen to that. On our early holidays to Seaview in the fifties and sixties, her social life, as a skilled tennis player, revolved around the sports club.

That changed later, when she took the helm; she adored racing her Seaview dinghy, often crewed by a grandchild – and loved sailing the Topper she bought when she was in her sixties. And, until relatively recently she was a keen member of the Wednesday evening Deck Team.

Widowed in 1990, she found love again with Barklie Lakin, who adored his years alongside her, in Seaview. After his death, she told me, with glee, that she’d joined her first gang – a group of indomitable women who lunched at the club, played bridge, went on jaunts, and laughed together. There were younger friends too. She became an enthusiastic, and intuitive member of the book club.

She passed on so much, to us; to Penny and me; to her 6 grandchildren and 10 great grandchildren. There was her love of sailing; of books; birds; of baking; her brownies and Grantham ginger biscuits were legendry; of Winnie the Pooh; but most of all her sense of fun, sociability, energy, and example on how to live life well and long.

A wonderful, and cool mother, she’d arrive at my boarding school in Somerset in her convertible Triumph Herald and sweep me and a friend or two off for a champagne picnic, followed by the theatre, cinema or ice rink. And at 74, she arrived in Ireland when our house had become a film set, and secured herself a part as an extra.

She was an incredible support to Penny when Julian died, so tragically.

“She was protective too,” says Penny. “She was still, a mother. And when I met Stuart she was, almost, jealous. She said, ‘not only have you found a man, you’ve found one with one of the nicest houses in Seaview.’”

The grandchildren adored her. She was a friend, as well as a grandmother. Non-judgemental, kind, open, and generous, she was unfailingly interested in them, and their children.

“She made my children feel important,” says Josephine, “and she gave them her time. And she was so interesting when she told us about her childhood and wartime experiences. I remember her, at 95, dancing in the kitchen and letting off fireworks.”

Tim says, she was the staunchest of allies, who always had his back.

“I remember arriving at the Crewe Arms in Bamburgh, when she took me out from Ampleforth, and her asking me what cider I’d like from the bar.”

Lucinda, who visited from Canada twice in the past year, says that the world has certainly lost some joy with her passing.

“You were a dear friend and inspiration to us. We can only aspire to stay so sharp and so spry for so long.”

She was kind to Olivia whose health failed.

“She always put me before herself,” she says. “And she remembered about my gluten free – even if she did call it duty free.”

Arabella describes her as a second mummy.

“I love you to the moon and back. You even took me in post C section with a baby. You never complained.”

Rebecca says that she was always a wonderful presence – a guidance and support.

I wish she could have read the letters that have poured in since her death – saying that Seaview won’t ever be the same. People remember her at 95 – still travelling and driving, and latterly, racing around Seaview, rather dangerously, on her scooter. Always elegant, serene, intelligent, dignified, interesting and interested, a tolerant and forgiving neighbour, a lovely smile, always ready to listen, kind, an inspiration to us.

She died as she lived. With grace, courage and dignity. Living weeks beyond expectation, she gave Penny and I time to share memories with her; to say all that needed to be said. We truly, have no regrets.

I’ll end with a verse from Olivia.

We will miss you so much, you are loved by us all

Until we see you on the other side