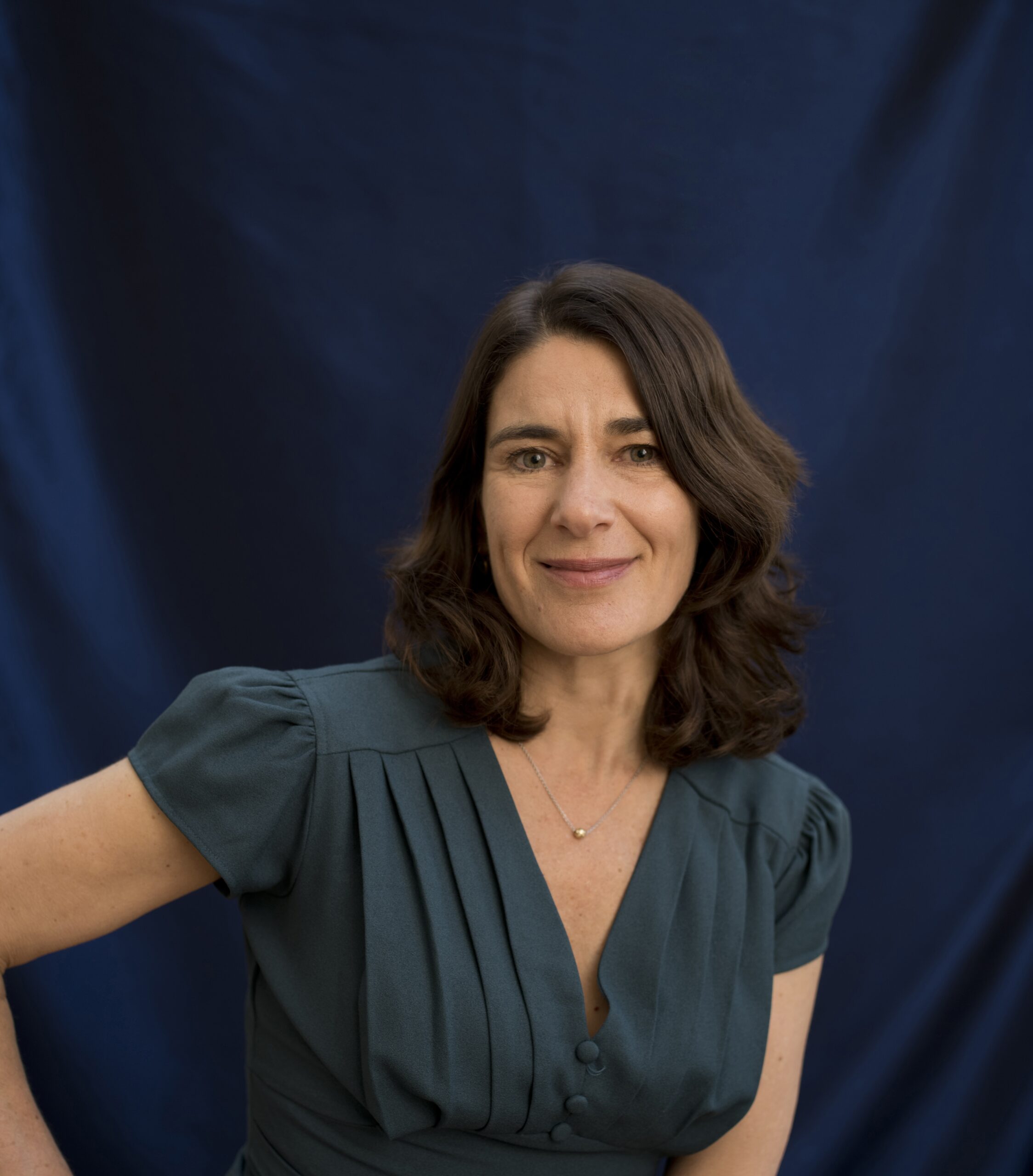 There’s a photograph in Esther Freud’s office of a beautiful young girl in first communion bridal glory. I noticed it on the shelf behind her as we talked of her latest novel, and she said it was her late mum, Bernadine Coverley – who inspired the plot of I Couldn’t Love Her More. Showing me the photo, close up, as we talk via zoom, Esther says that she looked at it a lot when she was writing the book.

When she started thinking about this ninth novel back in 2015, she wanted to write a series of love stories based on three generations of women. And she chose to model this on her grandmother, her mother and herself, mostly as a matter of convenience. But the more she thought about her mother’s story, the more compelling the idea became.

“What happened to her, was that when she was a teenager, she became involved with my father,” (The famous artist, Lucien Freud.) “When she was 16 her family had moved from London to a farm in Ireland. She became pregnant at 18 and decided not to tell her family.”

That first baby, Bella, was soon joined by Esther, but it was many years before her mother’s family knew of their existence.

“We went off to Morocco and we didn’t come back until I was six and my sister was eight.”

That story ended up in Esther’s debut novel, Hideous Kinky, later filmed starring Kate Winslet. But although Esther has mined much of her famous background in fiction, she has never seen this part from her mother’s point of view.

“As I started to write about her, I began to wonder what it must have been like,” she says. “I’d always hoped I’d be able to ask her how it felt to be estranged from her own parents. She did say to me that she had been scared she could have ended up in one of those homes, but I didn’t really believe her. I thought, of course not, but when I began doing my research, I realised these things were possible.”

The three women in Esther’s novel are Aoife, her daughter Rosaleen, and Kate. These interlinking stories weave their way through the text. While all three women have their problems, Its Rosaleen – evacuated from London as a small child – who carries the most pain. Finding herself pregnant and adrift in London, she asks advice from a Catholic priest and ends up in the Bessborough Mother and baby home in Cork.

“I started my research thinking that only happened to rural girls, but I discovered heart rending stories. There was a teacher in her early forties who thought she’d met someone who wanted to marry her. Abandoned, she went to the home thinking, oh well, they will help me.”

Most of us are, by now, familiar with the way babies were taken from their heartbroken mothers – and of the cruelty meted out to women in labour, but Freud’s tale is so powerful, that you feel the shock of it all over again.  As she talks of it, Esther is visibly upset.

When she began the book, news of the mass grave of babies who died at the Tuam mother and baby home started filtering through.

“The writing of the book covered the time the report was being created,” she says. “All sorts of news kept coming up and side-tracking me. It derailed me. Such sad stories, it made my skin creep with pain. I started thinking, should I be setting the book now?

“It took a lot out of me,” she says. “I felt I was climbing a steep mountain with a large pack on my back.  I thought, maybe I have lost the ability to write freely. I’ve been writing for thirty years, maybe I’ve run out of steam.”

Leaving school at 16, Esther was an actress before she turned to writing. Does she miss it?             “Never! Being a writer gives so much nourishment and freedom. It’s hard but I’m grateful for it. Even if a story comes to nothing, I’m happy that I’ve written it. It’s the making of something that brings the reward.”

Even so, when she handed the 500-page manuscript to her editor, she was in for a shock.

“She said, ‘I’m sorry, I just have no idea what’s going on.’  I’ve never had that experience before. It was pretty agonising. But we sat and talked, and she suggested some radical changes. I listened and thought, well I won’t do that, but I will do this – and I turned it round in two months into the book you have read.”

It’s a wonderful read. And especially for the contrasting ways in which the three generations relate to their men. For Aoife, her husband is everything. They work together, first in a pub, then on the farm. He expects, and she gives, absolute loyalty.

“My mother’s generation started to pull away and see what else was going on in the world. They were so much less conventional, and women of my generation are obsessed with their children. The men come and go and hardly get a look in!

“I also wanted to show all the different ways women explain and protect their men,” she says. “They’re expectations are so low. You go, ‘at least he’s funny,’ or ‘he’s good looking.’ We’re all flawed. But these women have different struggles although they do all love their men.”

Felix Lichman, the famous artist the fictitious Rosaleen falls for is clearly based on Lucien Freud. And that explains why the scenes showing Rosaleen posing for him, finding his passionate preoccupation with his art frustrating, feel so eerily authentic.

“I sat for my father a lot from the age of 16,” says Esther. “It was my teenage job and I sat for him several times a week. The last time was when he painted me with my first child at 31 or 32. You don’t have time to sit for hours and hours once you have children.”

Those children are now 26, 23 and 17. The younger two are currently living with Esther and her partner, a university professor, in St John’s Wood. And it made the second lockdown pretty stressful.

“My daughter was home from university. She is a big force and was starting a business. She regaled me with the highs and lows throughout the day. It was impossible to concentrate.”

Back in November, Esther bumped into the writer Tracey Chevalier, who was about to leave London for the country.

“She kindly gave me her key and I went to her house each day to write short stories. And honesty, it was like I’d suddenly learned to play the piano. My fingers were just flying. I was so relieved. And I’ve just heard some incredible news. One of my stories has been accepted for the New Yorker.”

Talking of the novel, and of the struggles, Esther tells me that lots of things changed for her in those years. She wrote her first play, which was performed in 2018.

“And within that time, I have to say I got divorced, moved house, and met someone new.”

In spite of those distractions, Esther has produced one of the most powerfully affecting novels I’ve read in a while. Is she happy with it?

“I feel lightheaded that I’ve done this,” she says. “And I feel a lovely connection with my mother. I’ve told the story she probably would never have told. But I know it was of deep, deep importance to her the way the girls were shamed and isolated”.

Published in The Irish Examiner on 10th July.