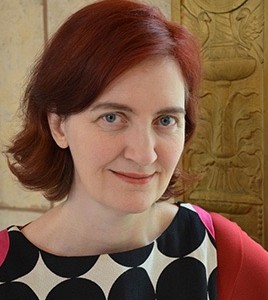 It’s great to see Ireland celebrate Emma Donoghue; who has been nominated for an Oscar for the Screenplay adaptation of her novel, ‘Room.’  f

Certain sections of the media were once less than supportive, as my interview of 2010, published in The Irish Examiner, shows only too clearly.

Emma Donoghue is perturbed. A journalist has just described her new novel  Room as ‘creepy.’  And though the subject matter – inspired by the Josef Fritzl case is certainly unsavoury, I found Emma’s sensitive take on it profoundly affecting, and ultimately uplifting.

The novel opens on Jack’s fifth birthday. He’s excited. Jack lives with Ma in a room measuring eleven feet square. Life revolves around TV, and the stories and games his mother constantly invents. He thinks TV isn’t ‘real,’ and he doesn’t know life exists outside. It’s an extraordinary tale of a mother’s love for her son, told with unsentimental reality.

“I heard about the Fritzl case in April 2008,” says Emma, “and shortly afterwards I was driving along in a hyper state, because I hate driving, when I suddenly thought, imagine if you told a story like that from the child’s point of view? That would save you from either being over sentimental, or sexually gratuitous. A child could tell it as, this is my strange world. The book came fully grown into my head.”

Was she worried that by choosing that subject, she’d be accused of being both prurient and of trading on people’s pain?

“The pre-publicity made me wince a little; it hinted that by choosing this subject I was craftily aiming to make a lot of money; but I knew when people read the book, and realised my approach was unlike true crime or voyeuristic thriller style, they would relax into it.”

Emma dedicates the book to her two children, Finn, 7, and Una, 3. Finn was five at the time of writing, and his voice lends authenticity, but was it painful, as a mother, writing about enforced captivity?

“It seems callous to say it, but painful things are meat and drink to us writers. We use pain to provoke a response in our readers, so when we think of something agonising for our characters we mostly say, ‘Ah ha!’

“Writing ‘Room,’ it was almost as if I were their captor. I was the one deciding, will I give them TV? Will I give them vitamin pills, and exactly how many square feet will I give them? I was dolling out their pleasures and their pains, and increasing the pressures on them, but it did not upset me because I knew that, all the time, I was giving Jack the unbreakable love of a really good mother.”

The research though, proved horrendous.

“I was having to read up about children brutally treated within the secrecy of a home; children found by social works too late. There’s a lot I wish I hadn’t read because I can’t get it out of my head. I like awake at night sometimes thinking about it.”

Emma wrote ‘Room’ in France. She’d gone there with her partner Chris Roulston, writing the book in six months while the children were respectively, in school and childcare.

Emma and her family live in London Ontario, but she’s from Dublin, and her first coming of age lesbian novels caused a stir here in the early nineties. Her third novel, the historical Slammerkin was a huge success in Ireland as elsewhere, but since then she’s become better known in the States and Canada. So she’s pleased that Room is bringing her back into our consciousness.

Half way through ‘Room,’ the pace changes. Ma and Jack plan an elaborate escape from their captor, but Jack finds ‘outside’ confusing.

“Any childhood goes from cosy, in a confined space to the exciting world of the teenagers, but for most of us that happens gradually. Jack goes from being a baby to a five year old overnight. He has a sensory overload, and he doesn’t know the laws of perspective. He misses the security of ‘Room.’

It’s worse still for Ma, released to her flawed family, and at the mercy of the media. They’re freaked out that Ma is still breastfeeding Jack – it is that that most shocks people. A crass,  insensitive TV interviewer pushes Ma towards the edge. That scene reads with great authenticity, and there’s a reason for that.

Last time I met Emma, back in 2004, she’d just endured a gruelling radio interview. Tom McGurk  had vilified her because she had a son with her lesbian partner.

“He went for me, and went on for twenty minutes,” she says, admitting it did cause her trauma. “That was one of my ‘have to get out of Ireland’ moments. It had been many years since I’d encountered that kind of attitude, and I’d never encountered it so malevolently.

“Friends in Ireland have to fly to Denmark or Newcastle to make a baby happen, and the one who is not giving birth has no rights, and even the new civil partnership doesn’t change that. By living in Canada I can forget I am lesbian for weeks on end. I’m just getting on with my life. You don’t have the constant reminder that you are a minority.”

The author adores her visits to Ireland, though. She loves spending time with her mother, a mum of eight, who, she says, was the main inspiration for Ma.

“I wanted Ma to be the ideal mother, but not in a bland way. Under those terrible circumstances she has to make tough choices, but she does the best possible job, even though at times she has to annoy and upset Jack.

“Often, when I was writing the book I felt like a bad, bad mother. I was mulling over what a good mother would do now, what games would she invent, then my own kids would come home and I’d be irritated with them because I wanted to be writing. I ended up feeling admiration for other parents, and more and more ashamed of my own parenting.”

There’s a buzz of expectation around this new book. Early reviewers have praised Emma for producing a work of art, and for her dazzling language. They’ve stated that, after reading it, the world will look different; and they’re right. It is a book that can change your thinking. I recommend it, wholeheartedly.

Room by Emma Donoghue is published by Picador at 13.99 euro. (Out in August.)