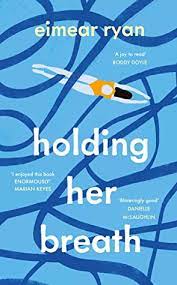 Eimear Ryan started writing her debut novel, holding her breath, back in 2013, shortly after finishing an M Phil in Creative Writing. As a highly successful short story writer, however, Eimear found the longer form harder to tame.

“I find novels tough,” she tells me, on zoom from her home in Cork. “They are so big. With a short story you can hold the whole thing in your head, but a novel is such a sprawling beast. Planning it seemed like a huge challenge. The first draft took just over a year, but it’s gone through so many drafts and redrafts since then.”

The toil of that was well worth it. The completed novel explores love, desire and the secrets of the past with the background of student life. And it does so deftly, with complex, but fully realised characters, and is so accomplished; so wonderful written and thought through, that it’s hard to imagine it’s a debut at all. I absolutely loved it!

Holding her breath is set in Trinity College Dublin, where Eimear studied for her M Phil, after taking her degree in journalism at Dublin City University. The novel opens when Beth Crowe starts at Trinity as a mature student. A professional swimmer, who’d held some Irish records, she’s had to take time out having crashed out of the sport, and out of education, and is now trying to carve a new identity.

At Trinity, her name proves a magnet. Her late grandfather, the poet Benjamin Crowe, died by suicide when her mother was twelve years old. Brought up in his shadow, by her mother, and Ben’s widow, Lydia, Beth now finds herself surrounded by her grandfather’s admirers. There’s her flatmate Sadie, for one – not to mention the post-doc academic Justin Kelleher, who exerts such a pull. But why did Ben die, and what part did his proposed biographer, the mysterious Julie play? This mystery, at the novel’s core, makes for compulsive reading.

I was impressed at Eimear’s restraint, and the way the plot gently unravels. Did that come naturally?

“It came about in the rewrites,” she says. “At one point I went from the first person to the third, and that caused me to rethink the exposition and how the plot would develop. The third person is more veiled, and it allowed me to tease it out more.

“I thought of this as a detective story in some ways,” she says. “By uncovering the mystery that nobody in her family wants to talk about, Beth peels back the layers. It was fun to do that through the lens of a classic genre.”

The initial idea for the novel was sparked by the poets Ted Hughes and Sylvia Plath.

“I was thinking about their children, Frieda and Nicholas Hughes and the idea of having these two enormous shadows looming over them. I wondered what that would be like, and could I write from that perspective?”

“I was learning to swim at the time, and my head was full of swimming imagery and swimming thoughts. That’s how it folded into the story. I took an adult course when I was doing my M Phil. I think it had always been in the back of my mind. I lived in a landlocked county, and that was the line that I used throughout my youth. It was only when I went to college that I realised that everyone was able to swim, and I wasn’t.”

Eimear captures the sheer joy of powering through the water, feeling calm and at peace. But also, how the intensity of competitive swimming caught up with Beth. And that element came from Eimear’s own background in camogie.

“I grew up in a small rural place and the GAA was the whole world,” she says. “It was a community pastime. It’s so hard with sport. You come to it as a child and fall in love with it, and it’s all about play and enjoyment, but if you have talent and start to specialise at a young age, it turns serious very quickly. Adult levels of dedication are required in your teens, and you have to close off other possibilities.”

Hugely successful, Eimear represented Tipperary in the sport, but it took its toll.

“After playing matches or training every day of the week, I fell out of love with the sport, and took nearly two years out. Then it was like a complete reset,” she says. “I played for enjoyment, and I still play club camogie at the advanced age of 34!

“I wanted to write about that sporting burnout and sporting failure. It’s all the stuff and scaffolding around the sport, and other people’s expectations. All the baggage that comes with talent and potential, and that’s what knocks Beth sideways.”

The decision to make the novel about swimming rather than camogie was deliberate. Initially reluctant to write about GAA because it felt too uncomfortable and personal, she had her mind changed for her when, in 2016, Kevin Barry and Olivia Smith asked her to write an essay The Fear of Winning, for the second edition of the literary journal, The Winter Pages. She did so, and she has absolutely no regrets.

“It led to so many good things,” she says. “Like writing for the Irish Examiner about sport each week, and to the factual book I’m now working on.”

That book was commissioned by Brendan Barrington at Penguin/Sandycove, her editor for holding her breath. She’s working on it now, hoping to complete it by the close of the year.

Happy in Cork, where she lives with her partner, Cal, Eimear now plays camogie for St Finbar’s, instead of Moneygall in Tipperary. It was a wrench leaving Moneygall, she says, but necessary after travelling to matches from Dublin, then Cork for so many years. And she’s now more than happy in her new club.

Lockdown has been kind to Eimear. Having always worked fulltime, first for an educational publisher, then in admin for University College Cork, last spring she was appointed UCC’s writer in residence. It’s a post she adores.

“It’s been an odd year because I haven’t been on campus yet, but I taught last Spring, and the students were great, even on zoom,” she says. “I liked that the ones who are quite introverted and aren’t confident speaking out could type in the chat section. And it’s been amazing writing full time for the first time in my life. It’s so liberating!”

She and Cal – who also works at UCC – have enough space to work in separate rooms, and during the first lockdown, Eimear was working on her edits for the novel.

“I’ve actually had an ok time of it. It was really useful to have Brendan Barrington’s feedback to work with because I know a lot of writers found lockdown really tough in terms of creating. I was able to throw myself into this handy project I had up and running and not worry about creating anything new.”

She has some ideas brewing for short stories – and would love, someday, to publish a collection. As for the second novel, that’s still in the ether.

“Hopefully an idea will emerge,” she says.

Does writing make her happy?

“Writing is a bit like sport. When I’m doing it, I’m completely focused, happy doing what I’m supposed to be doing, completely in it. The rest of the world falls away. But it can take me maybe an hour to get into that headspace. There’s a lot of preamble and throat clearing and doing unnecessary admin tasks to distract myself. The act is brilliant, but not all the stuff that’s around it.”

Published in the Irish Examiner on 26th June.