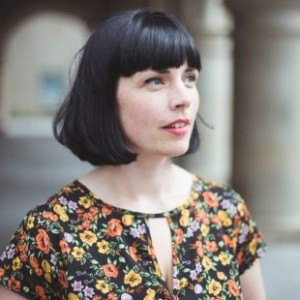 There’s something other worldly about Doireann Ní Ghríofa. Exuding warmth and empathy, she speaks as she writes – fast and fluently, and there’s a natural lyricism there. She’s also quite disarming honest. Highly renowned in the literary world– she was recently elected to Aosdána, the prestigious affiliation of Creative Artists in Ireland. Such is the ease of her writing, I assumed she’d been a poet since birth, but not so.

At 17, determined to be a dentist, Doireann left her Gaelscoil in County Clare for University College Cork, where she took a year of Anatomy. But it was a dark, difficult time.

“I really struggled with that transition from childhood to adulthood,” she says. “There were two nights where I looked into the river and thought, I could end this. There was that sense of climbing over the railings and preparing to leap. But that moment of darkness collided with a moment of good fortune. Someone pulled me back, and I was able to drag myself out of that darkness and to a different shape in my life.”

Ditching dentistry, she switched to Applied Psychiatry with Literature, and, settling down, meeting the man who became her husband, she followed those three years with a post grad in primary school teaching, before taking on Junior Infants, first, and second class.

“I taught for a long time and I was really happy,” she says. “It was a nourishing, rewarding job for me, but when I had my first child I was really drawn to staying at home and looking after him. When my maternity leave finished, we cut financial corners, and lived in a frugal way in order to stretch it for another year.”

And that’s when poetry entered her life.  Her grandfather – to whom she had a deep fondness and connection – was dying in a Dublin hospital. Rushing from her home in Cork, Doireann was there, at her aunt’s house, on the night the hospital rang calling the family in.

“It was felt inappropriate to take a baby, so I stayed in the house. I was lying beside my baby in the dark, and lines of poetry came to me in the Irish language. The same two lines kept repeating and more were coming to me.

“I’d never written a poem and thought it must be something I had heard, or learned in school, but when the baby was asleep, I looked around for a pen and paper and wrote down everything that was in my head. I kept writing and writing, realising the lines were coming through me. I’m aware how strange that sounds,” she says, “and I was really startled.”

The baby is now 11 – and Doireann has written poetry or prose, in the Irish and English languages on every day since.

“I feel it was something that was given to me and is given to me every day,” she says. “And every day I think of my grandfather – it feels such a strong connection to have with him.”

If you’re choosing a financially viable career, being a poet would not be at the top of the list. But with a sleuth of arts council bursaries, prizes and awards for her six poetry collections, (including the  Rooney Prize and the Lannan Literary Fellowship), along with her many artistic collaborations, and journal publications, Doireann has, surely, done as well, both critically and financially as it is possible for a poet to do.

“It’s a huge honour,” she says, “and I’m so grateful. When a committee decides to award you, the sense of your worth is being acknowledged. It’s just such a vote of confidence. That’s as important as the financial support.”

We’re talking, over the phone, about Doireann’s latest publication – her most ambitious yet. A Ghost in the Throat combines memoir with an exploration of Doireann’s connection with the Cork based poet, Eibhin Dubh and with her famous 18th Century poem, Caoineadh Airt Uí Laoghaire.

She first encountered, and fell in love with the poem, as an eight-year-old, but it’s when she was pregnant with her third son, that the work started to resonate. Dubh was an Irish noblewoman whose husband was murdered. Passionately in love with him, the pregnant mum of two discovers his slain body, and drinks handfuls of his blood. Doireann became obsessed with the poet – seeing parallels between herself and the other writer, feeling links across the centuries.

A Ghost in the Throat opens as Doireann, waving her husband off to work, copes with the muddle of motherhood. Juggling her three sons, the youngest a baby, with the housework that consumes her, she crosses items of her list, whilst snatching moments to commune with Eibhin Dubh’s words. That she manages to make the scene both poetic and compelling is an extraordinary achievement.

“For the writer or artist, through a time of boredom, trauma or joy, there is some mischievous and merciless little elf of yourself that comes together,” says Doireann. “And at some point you think, I am going to make something of this. There is a line by Maggie Nelson saying, ‘there is nothing that you can throw at me that I can’t metabolise.’ Even going through the boredom of housework I think, can I make art of this?”

Reading all the translations, before writing one of her own, Doireann struggled to find out more about the writer’s life, and that of her family. And although much is known about the menfolk, Eibhin’s and her twin sister’s lives remain largely hidden.

“It was extremely frustrating to find so little,” says Doireann. “Whether the women destroyed their diaries and letters themselves, or whether their husbands felt they weren’t worthy of keeping we don’t know. With the book, I wanted to bring the reader along with me, feeling as much of the excitement and frustration that I did.”

Her obsession endured, but she hadn’t, initially envisaged this book of prose. And it wasn’t until her fourth child, a daughter was small that all that changed.

“I left Kilcrea Abbey after one of my pilgrimages, and a refrain bubbled up. It was a statement, ‘This is a female text.’ It repeated, like a pop song as I was driving home, and I didn’t know where it had come from.

“I got home, carried my little girl in from the car, and wrote it down feeling perplexed. I hadn’t had a conscious thought – and I had to work out what the hell it meant. That,” she says, “was the beginning of the book, and it was also the end. The whole book is a pattern of echoes. I felt close to Eibhin Dubh as I wrote it, and the shape of the book leads from her.

“The poem was such an aural work. It was spoken by Eibhin and carried by female voices for so long, being recited and learned before it was written on paper. I felt guided as I wrote the book. I often felt it wasn’t just me sitting in the room – and it wasn’t just Eibhin who was with me. There was a strong sense of female tradition.”

From the start, Doireann saw Tramp Press as the work’s natural home. Not only does Tramp publish new exciting literary voices; it also reprints writers from the past. When Lisa Coen and Sarah Davis- Goff called her for a meeting, she was terrified they’d say, ‘We love it, but…’

“The ‘buts’ didn’t come at all!’ Doireann laughs. “When they said they were going to publish it my head fell down on the table, and I started crying. It was embarrassing, but I was overwhelmed. I had found a path for even more readers and listeners.”

Published in The Irish Examiner, on 3rd October.