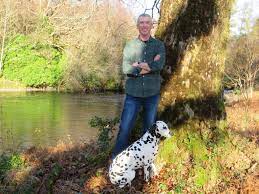 When Lilliput Press were preparing to publish The Spirit of the River, they were so impressed with Declan Murphy’s lyrical prose, that they suggested a literary prize winner should write the foreword. But Murphy wouldn’t agree. He insisted that the then eleven-year-old activist Lilly Platt should write it instead.

“I wanted the book to reach budding naturalists,” he says. “I wanted to tell them someone has gone before you – someone who did what you are doing when they were young, and they’re still doing it. And that they will get there and can be confident and happy in their skin. And you don’t reach that audience by having a foreword from an ageing literary writer.”

A lifelong ‘birder,’ Murphy’s passion has taken him across Ireland, and to Australia, Asia and Africa. Brought up in Dublin, he now lives in County Wicklow with his beloved Dalmatian, Lucy. A seasoned speaker, he gives presentations on nature to schools, libraries and other groups, and his writing has appeared in several journals, but he has never received any formal writing training.

Murphy wrote his first book, A Life in the Trees, in 2017, when he was working for Birdwatch Ireland. The first ever woodpeckers were breeding here, and several of Murphy’s colleagues were chronicling the event.

“A few people wrote papers, and those were perfect for science,” he says, “But they didn’t tell the story of what we did: of the four or five of us thrashing through trees day and night. I thought that story needed to be told. And I wrote it chronologically.”

Reading the first draft, his friend and neighbour, the film maker John Boorman said, “There’s not enough ‘I’ in it.” And when Declan explained that the book wasn’t about him – it was about the bird, Boorman said, “Wrong. It’s about you and the bird.”

Murphy took the advice to heart, but, writing about himself made him uncomfortable – he was worried people might laugh. But as it turned out they loved that element – he received more compliments about the personal aspect of the book than about the nature. And writing the second book, he decided to let rip!

It was a wise decision; one that gives the beautifully written narrative a welcome added dimension. Travelling the river with the author during his weeks of frustration, as he searches for the Kingfisher’s Nest the reader feels at one with him. And when, finally, his efforts are rewarded, we share in his utter elation.

While there are many discomforts to be endured during long days on the riverbank – Murphy gives himself rewards along the way. He loves coffee – but not just any coffee. He brings a cafetiere with him each day, and a selection of different blends of ground coffee.

He’s made me see nature in a new way. He compared rivers to people – with different stages, moods and personalities.

‘The River that flows through the Wicklow Mountains are in the youthful stage of life,’ He writes. ‘Free, untamed, with endless and uncontained energy, they bound down the mountainsides like hyperactive children.’

He loves watching the way families of animals interact – marvelling at watching a private, special moment as a family of otters’ frolic and swim together, simply enjoying life. But it’s the birds who take centre stage.

Before focusing on the kingfisher, Murphy returns to the woodpecker – starting with an event he observed after the first book had gone to publication. The male and female generally divide the task of incubating the eggs – taking turns but with the male bearing the brunt of the burden.

But with the Woodpeckers Murphy was observing, the female disappeared having laid her final egg. This left the male to cope alone – incubating the eggs, then feeding the hatched chicks – a mammoth task for one bird alone.

“It was beyond belief that the male became a single da, incubating the eggs from day one,” he says. “It was a story that had to be told.”

He has the ability to tune into nature.

“I don’t have a filter button in my head, so all the sounds come in equally; the sound of the river; birds calling; a person talking. Sometimes 7 or 8 sounds are coming in my head. I’m not sure if that’s an ability or a problem!”

As a child growing up in the Dublin Suburbs, Murphy escaped to the countryside whenever was humanly possible. Excused games, he spent many teenage afternoons ensconced in ‘The Dead Zoo,’ studying wildlife, and discussing it all with the museum’s experts. He yearned to be a vet, and tells an anecdote of shadowing one, and insisting that the man treat a wild injured fox. Lacking the academic points, he thinks it wouldn’t have suited his temperament.

“I think the death would have got to me,” he says.

He’s certainly emotional. In the book he writes a tender eulogy to a former dalmatian, Sacha, and even talking about this, years later, brings tears to his eyes.

“I’ve had so many messages about that passage,” he says. “Most people who lose dogs are devastated – but they move on. And others don’t understand. They say, ‘it was just a dog.’

It’s this sense of empathy that makes Murphy such an outstanding naturalist. He is at one with his surroundings. While most of us would find endless hours on the riverbank somewhat tedious, Murphy stays utterly engaged.

Currently unemployed, he feels he has to justify himself to his family, when he tells them how busy he is.

“They say, ‘how are you busy? What are you doing?’ And I say, ‘well, I have to go to the river, because I’m trying to find a fox’s den – and I’ve been walking around trying to track three woodpeckers and figure out where the nest is. I’m absolutely flat out!”

While he is pleased, in theory, that the pandemic has given the public a new appreciation of the countryside, it hasn’t made his life any easier.

“The pandemic has been hell for me,” he says. “It’s getting harder and harder to get away from noise and people. And you’re trapped with not being able to travel.”

There will, definitely be a third book, but he hasn’t settled on a theme. He’s been dabbling with pine martens, ravens and kites, but no one species has been co-operating. Meanwhile, what’s his greatest hope for The Spirit of the River?

“That it will appeal equally to birdwatchers and non-birdwatchers. I was conscious of getting the balance right. But mostly, I want to reach young people.

“I’m conscious of a new generation coming up who are active in big issues like climate change – but none of them are experienced in grassroots watching. Lilly Platt has picked up over 100,000 pieces of plastic. That’s extraordinary! Since I’ve written the book, Lilly has started going out into the countryside. She’s now identified 10 different species of birdsong. She’s excited to hear more! That’s the message I wanted to get across.

“It is about learning to see the world through a bird’s eyes and senses, and trying to understand how they perceive the wonderful world we share.”

The Spirit of the River. A Quest for the Kingfisher by Declan Murphy. The Lilliput Press: €18.

Published in the Irish Examiner on 9th October