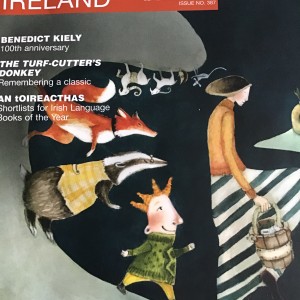 When a debut novel is described as ground-breaking – and words like reinvention are used, my heart sinks. Because all too often this is just another way of saying that the work is difficult. And at the start of Saltwater, as the author gives snapshots of a myriad of non-sequential phases of her life, I wondered how she would sustain her specific brand of experimentation.

Divided into four parts, most of which have over 100 chapters – or sections – Saltwater is narrated in the first person by Lucy, an impoverished student from Sunderland, who, feeling overwhelmed in London, travels to Donegal, location of her childhood summers.

Her grandfather has died, and left her his cottage there, and she stays, alone, living on little money and with no transport. She looks back on her childhood, and specifically on her bonds with her mother, her deaf brother, and with her shambolic father, an alcoholic who drifts in and out of the family’s lives.

Acutely aware of her own, and her mother’s physicality, Lucy worries about the loosening of the maternal bond. Without it, where is her place in the world? Meanwhile, the Donegal natives, remembering her family well, observe her burgeoning romance with a faint whiff of disapproval, muttering that she’s just like her mother.

Jessica has previously published poetry and short stories, and this novel is both lyrical and compelling. As it progresses, you start to see the sense of the small sections, and realise there is logic to their order. It’s a rare thing for a new writer to be able to sustain an original take on the written word, but Jessica Andrews has proved equal to the task. She’s a name to watch.

There’s been a wealth of fiction coming from Northern Ireland of late, and much of it focuses on the troubles. We’ve heard the story of terrorists; of victims; of the army; and of people whose day to lives were impacted on. But what of the police force, the Royal Ulster Constabulary, who found themselves dealing with terrorist atrocities?

Nights in Armour – a debut novel from Samuel Thompson explores the lives of a team of RUC officers. It’s the time of the Bobby Sands Hunger Strike – and there’s a raft of shootings and car bombings. How will Carson Clarke, Jim Reid and their colleagues deal with their job, when they’re a target for the IRA, yet have to appear to have no allegiances to either side?

These fast-paced roller-coaster starts when a routine roadblock ends in violence. As the pace increases, the reader sees how the tension of constant danger can cause nightmares and burnout. It’s not all high action. We see the men’s domestic lives too; and the difficulties of sustaining a romantic liaison when women say their men never talk about things, yet don’t want to hear of the violence.

The characters are all well described, from Montgomery, who, out of his depth on the beat after years spent in headquarters, will do anything to avoid danger, to the ghoulish Diane, who comes alive at the sight of a dead body. But it’s the ambitious Reid who carries the tale. And whilst he’s not an entirely sympathetic character, you end up rooting for him because of the sheer complications of the job.

‘The job required supermen with limitless patience and dedication. It needed men with no feelings or emotions, who would take enormous provocation and never react, men who never did wrong, never made mistakes. The men and women on the front line were terribly ordinary. They did their best. It wasn’t enough.’

Samuel Thompson served in the RUC, and there is a strong sense of authenticity throughout. Overall, this character driven thriller is an excellent addition to the Northern Irish canon.

All in a Doctor’s Day. Dr Lucia Gannon. Gill Books.

Lucia Gannon didn’t intend to become a doctor; she was all set to become a teacher, but was put off, because she didn’t know how to buy a suit to wear at the interview. Her patients, and now her readers can be very glad of that, because All in a Doctor’s Day is a quite delightful memoir – informative, yet humorous.

Lucia and her GP husband set up practice in Killenaule, a small village in Tipperary, their two small children in tow. This memoir recounts their time there – and the pleasures, and problems of building up a practice from scratch.

We hear sad stories – like that of an elderly widow who, needing nursing home care, had to be prised, screaming, away from home; and of how Lucia had to break protocols in order that it happen. She tells of the difficult patients; the times she feels threatened, and of those others, taking up her time to combat loneliness. And she explains the six steps a GP takes in an attempt to manage a full consultation in 15 minutes.

The eldest of ten children from Renvyle, County Galway, Lucia has that knack of self-knowledge, and this makes the book shine. She speaks of the difficulty, when you are naturally shy, of fitting in and making new friends.

I liked this mixture of the personal and professional. She doesn’t spill too much of her family life, yet we’re pulled into their exploits as they battle it out in RTE’s Ireland’s Fittest Family; and, in her daughter’s case, work towards her ambition to follow her parents into medicine. Sensitively written, this book will increase understanding between doctors and their patients.

This gentle, big house book by the former Director of the National Gallery, opens in the early fifties, when the widower, Willis Esdaile inexplicably banishes his only son, Edward, to the care of his grandparents. His logic is that living there, he’ll be better placed to inherit his grandfather’s estate, but why has Willis so taken against his only son?

We do learn his reasons – although not until near the end of this saga, but this theme of inheritance runs through this debut from the 73-year-old. The action zips along, with the preoccupations of the protestant landed well examined. There are references to mixed marriage, and Ne Temere.

An indulgent father to his two daughters, Willis can be wise. When the headstrong Julia marries in undue haste, he’s sussed out the reason why, but keeps quiet. Lydia, the unfortunate youngest, doesn’t fare so well. Denied a good education, she’s expected to stay at home, caring for her father.

The star of the novel is Knockfane itself; and Willis’s determination to secure its succession. Threats come from the land commission, and from various relations, like Todd, a cousin from New Zealand who trails trouble in her wake.

Potterton’s 2002 memoir, Rathcormick; A childhood recalled was justly praised for its lyrical account of times past, and Knockfane contains this same expressive prose as he explores the lot of women, along with the religious conventions and suspicions between Catholics and protestants in the second half of the twentieth century. There are some unlikely twists, and co-incidences along the way, but I enjoyed this memoir for its grace and gently pace.