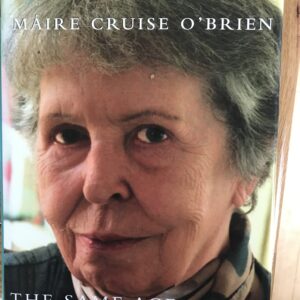 I was so saddened to hear of Máire’s death at the weekend. Back in 2003, I was lucky enough to interview her about her memoir, The Same Age as the State. I spent a glorious afternoon with her and her husband, Conor Cruse O’Brien at their house in Howth.

Here is the interview, published in the Irish Examiner.

Reading Máire Cruise O’Brien’s memoirs, I was stunned by her honesty.  And when I meet the 81 year old in the Howth house she shares with her husband Conor, with its breathtaking views across Dublin Bay towards Wicklow Head, she disarmed me with her radiant calm.  She answers awkward questions with openness; happy to discuss her mistakes in life and her messy love affairs.

“I wrote the book for money,” she says, adding that it was publisher Michael O’Brien’s idea.  “Like many married women I have no money of my own, and I thought it would be rather nice to have a little.”  She pauses.  “And it’s an accurate description of a generation that people today tend to view as joyless and narrow minded and they weren’t.  They were marvellous.

“I enjoyed writing the first three chapters,” she says.  And it shows.  The descriptions of her parents Sean MacEntee and Margaret Browne, who met when they were on the run, makes vivid reading.  Anti treaty, MacEntee later served prominently in de Valera’s government. The memoir is littered with legendry figures.  A self deprecating narrator, Máire felt it was important to chronicle her experiences at the United Nations and in the Congo.

As a baby Máire once shared a bed with de Valera.  She remembers meeting Maud Gonne, ‘a very beautiful witch dressed in widow’s weeds.’ Yeats lived nearby.  In Madrid she met the real life hero of Kate O’Brien’s ‘Mary Lavelle.’  Samuel Beckett showed her round post war Paris.

“It didn’t occur to us that everybody did not have parents who were intensely interested in politics.”  Fulfilling early promise, Máire joined the Department of Foreign Affairs, was appointed the token woman on the first UN delegation in New York, and was ‘charge d’affaires’ in Franco’s Spain.  An Irish scholar she is a renowned poet, and member of Aosdána.

Yet it is her love of family that makes the book shine. Just last weekend Máire and Conor hosted a huge family picnic.  Máire adores her step and grand step children, talking of them as warmly as of her own beloved adopted children. But with the pain around  Conor’s separation- keeping the divergent strands of family intact cannot have been easy.

“None of it was easy but it was feasible,” she says, explaining how she and Conor’s first wife Christine met for lunch regularly.  “We always took the three children to concerts and plays together.  And keeping the house, even though we had so little money seemed essential.  Then wherever we were they would always be able to come and go.”

Born in 1922 Máire and her siblings divided their time between Dublin and Kerry.  Their father was often absent, but their Uncle Paddy, a blissfully calm priest, spent much time with the children, giving them the most fantastic education by speaking to them only in Irish.

“I always knew I was bright, but I didn’t necessarily think that was the key to happiness,” says Máire, who felt in the shadow of her beautiful but troubled sister Barbara.  “I was a plain enough child and I thought I was a very stout teenager.  I thought I was extremely unattractive and would never marry.

“Paris gave me back my self confidence. It changed my whole attitude to life. French men really like you.  They’re interested, and oddly not only in sex.  They are interested in what constitutes femininity.  That was gorgeous.”

There has been much sadness in Máire’s life.  Her sister Barbara fought depression all her adult life before dying of cancer. Máire, too, has known minor depressions, though in her case they are controllable. And her poetry helps.

“It’s a great safety valve.  If you can write a poem about your depression it turns it into something else.”

Her first, life changing affair was with a womaniser who treated her appallingly.

“But it was ideal from my point of view.  Just too perfect to last,” she says.  A close friendship in Spain left her confused about her sexuality. Her relationship with Conor, a married man, though separated, caused a minor sensation- and upset her parents who knew and loved Christine. “I had always thought of them as an ideal couple,” says Máire, who has known them for years.

Losing Conor’s baby in Ghana was a terrible blow; marrying at 40, Máire knew there was little chance of a further pregnancy. And later came the devastating death of Kate, Conor’s beautiful talented younger daughter; something he has still not come to terms with today.

There have been wonderful times too.  The adoption of Patrick and Margaret seemed miraculous.

“We bonded beautifully.  With Margaret it was phenomenal. She was only 7 months old, but she was determined she was coming home with us, and was taking over the household, which she promptly did.” Now in their thirties, both lead happy and successful lives.  Patrick’s wife Sarah is beautiful, says Máire, who has dedicated the book to their son, three year old Milo.

“A lot changed after we adopted them.  We became more normal parents.”  Before, living in the Congo, Ghana, Europe and America as Conor’s career veered between politics and academia, life was often hair raising. “I like danger.  That’s why I like bullfights,” admits Máire, whose bravery in Katanga makes dramatic reading.  “I still like taking chances in a car.  I was never deterred by caution.”

Which, married to Conor, who is still a hard hitting columnist, is perhaps just as well.  As a nationalist, what does she make of his Unionist sympathies?

“I think he is absolutely right.  Until people of nationalist background go the whole way to support legitimate unionist fears and hopes I don’t think you’ll ever have reconciliation. I would not be able to do it because I am too emotional, but I’m well able to back him.”

“I could never understand how Christine could prefer her second husband to the one she had,” muses Máire, as Conor passes through the kitchen on his way out to the local shop. “Though maybe if she’d lived with Conor for 15 or 16 years she was glad to get refuge with somebody.  Conor isn’t safe.  He isn’t easy to live with.

“But Conor is marvellous company.  He is the only person I know who can be convincingly funny at breakfast.  That makes it easy to put up with him.”

The Same Age As The State by Máire Cruise O’Brien, nee Máire Mhac an tSaoi is published by O’Brien press at 24.95

Published in the Irish Examiner, 2003