Couple Describe the Heartache of Losing a Baby 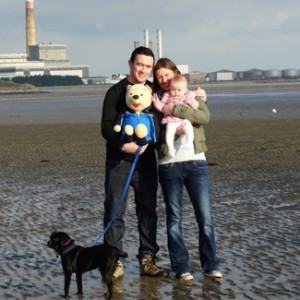 IN August, 2012, Feelgood interviewed Jason Garland, a fire-safety engineer who had a special bond with his cuddly-toy Pooh Bear.

The movie, Ted, had been released, and there were parallels. Jason told us about the bear who had travelled the world with him, who had been to Ayres Rock and attended his wedding. The story captured the public imagination and was followed by several radio interviews.

“It was all good fun,” says Jason, now 34. “And it was great to see this little bear get so much attention.”

Life was good. Jason’s wife, Valerie, was pregnant and he joked that, come the birth, Pooh might be jealous. Sadly, that was not to be.

“A scan at 16 weeks showed that our baby girl’s heart had stopped. Keeva was cruelly robbed of her tiny life… It was the most horrific experience imaginable.”

The next day, Pooh had been due to draw the raffle tickets at the Aughrim Teddy Bear’s Picnic.

“I wanted to cancel, but Valerie insisted we should go. She said we mustn’t disappoint all the children there, and she watched us as we drew the tickets. I don’t know how she did it, but I love her for it. She’s a super-hero.”

2013 was a difficult year for the couple, who were still grieving for their baby. But then came great news. Valerie was pregnant again, and with twins.

“Later, we were told we had a boy and a girl,” says Jason. “We were euphoric. We named them Oisín and Saoirse. It all seemed so perfect.”

But the euphoria was not to last.

“Oisín wasn’t growing at the same rate as Saoirse. The doctors didn’t expect him to live later than 16 weeks into the pregnancy. This put Saoirse’s chance of survival in serious doubt. We were on the brink of losing everything. We felt there’d be no coming back from that,” Jason says.

Oisín proved to be stronger than expected, and was still alive when Valerie’s waters broke at 30 weeks.

“I was admitted to Holles Street,” she says, “and I was there for two and a half weeks. Pooh came in with me. Jason dressed him in scrubs and gave him a stethoscope. He was a great hit with the nurses.”

On March 31, Oisín’s heart stopped. And on April 4, Valerie had an emergency caesarean section, and the twins were delivered. She was able to hold Oisín, while Saoirse, at 4lb 3oz, was whisked away to the neonatal intensive-care unit.

“I wish I had been able to hold Oisín before he died,” she says. “That was hard. It would have been nice to have told him we loved him. He was a heart-breaking two pounds.”

The next few days were bittersweet.

“It was a blur. On one hand, you’re delighted that you have a little girl, especially after we had lost so many, but you’re so sad for all the ones you have lost. For the first 10 hours, I couldn’t see Saoirse or hold her. Jason took a video for me, and I watched it over and over again.

“They were born at 6.57, on Friday night; the nurses said I could see Saoirse at five o’clock the next morning. I was wheeled there on the dot. I’ll never forget seeing her little face.

“I couldn’t walk for a few days, and I remember, when I could, I went to NICU by myself and the nurses said, ‘would you like to hold her?’ There was just me and her for an hour. The bond grew, and that moment lived up to every single expectation.”

Now 10 months old, Saoirse is a gorgeous, blue-eyed happy bundle, and she’s thriving. She’s been joined by a puppy, called Declan, a very sweet King Charles Pug cross, and she, Declan, and Pooh are the greatest of friends.

“Pooh comes to the park with us, and on holidays, of course. It doesn’t look so odd now,” quips Valerie.

Pooh is also to star in a short film later this year.

The pain of losing Oisín, though, can still be acute. “You’re happy, then, in a second, you’re not,” says Jason. “Just seeing a double-buggy can do it. It reminds you that you should be watching them both grow up.”

During Valerie’s time in hospital, the couple had an afternoon out. It was Mother’s Day and they wandered around Merrion Square.

“We bought a picture,” says Jason. “It was of the Poolbeg chimneys and, to us, represents the twins, forever playing together on the beach.”

Jason wanted to do something in Oisín’s memory. “I needed a hug back then. And I thought, ‘what if there was a Hugagram service, where people could log on and order a hug for loved-ones?

We’d send ‘Huggies’ wearing panda T-shirts and identification badges to give the person a hug on their behalf, and read a message to them. It could be worldwide, and would be great with Ireland’s current emigration.”

Currently available in Dublin, a hug costs €50, including VAT and a €5 donation to the LauraLynn Children’s Hospice.