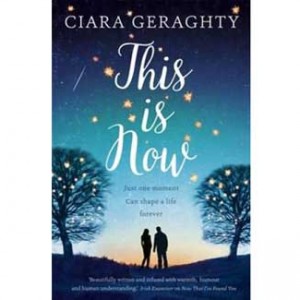 FROM the moment Ciara Geraghty burst onto the book scene in 2009, she has been an author to reckon with.

Compared favourably to Marian Keyes and Jojo Moyes, her books have that same warmth tinged with darkness.

Reviewing Ciara’s third book, Finding Mr Flood, I described it as possibly the best woman’s commercial fiction book I had ever read, and the three she has written since have been, if anything, even better.

With each book she has grown, covering important issues but managing to avoid being heavy-handed.

However difficult the subject, she manages to wrap it in a blanket of benevolence, humour, and love.

There’s a crime component, and an element of grip lit in her sixth novel, This is Now.

Combined with her usual brand of humour and authentic characterisation, it works brilliantly.

But I wondered if she had been steered in this direction by her publishers — because I have heard that the current climate in publishing has forced many authors to adhere to current trends.

But she says this wasn’t so.

“My publishers are very good. My editor, Ciara Doorley would take the hands off approach with me, which I really appreciate. I don’t write on trend,” she says.

“There would be a danger in that. I’m quite a slow writer, and by the time I’ve written a book it won’t be on trend any more. And I’m not a crime writer.

“I found writing about the case really hard. I spoke to detectives and said, ‘what am I going to do?’”

Since the start, Ciara has been universally praised. But apart from a nomination for The Romance Association in England, she hasn’t been on any award lists — and her sales have never been stratospheric. I really don’t understand why.

“Could it be my red hair?” jokes Ciara, when we meet in a Dublin cafe.

Being serious, she thinks her problem is that as a storyteller, she doesn’t fit neatly into a genre.

“Publishers and book sellers love genres because then they know where to pitch a book, but I write stories and they grow.

“I write my way in, going about it the long way round. It works for me, but can be infuriating for everybody.”

This is Now opens with a bank robbery in Swords, County Dublin.

Caught up in the action is Martha Wilder, a journalist who has an uneasy relationship with alcohol.

She is accompanying her friend, Tara, who has an important meeting with the bank manager, who just happens to be her sister.

One of the three raiders is a young Polish immigrant called Roman.

His mother Rosa, is in the bank accompanying an elderly German from the care home where she works, and she recognises her son as he makes his escape.

The fourth main character, Cillian, the police detective put on the case, knew Martha before she got her life under control.

“I’ve always wanted to write an ensemble piece, with lots of different characters who are apparently unconnected until their lives intersect,” says Ciara.

“I love films like Short Cuts and books like The Slap, and Patricia Scanlan’s Apartment 3B. This was my attempt.

“The theme of the novel is that we are the sum of our moments. All the stories in our lives, small and big impact on us in some way.

“You arrive at a time in life, and you are this particular person; I wanted to explore are you always going to be that character, or can you change?”

The German, Tobias Hartman, an elderly man who has a secret talent, was a character in one of Ciara’s earlier — unpublished — short stories.

“In the story he was an Irishman, but, like Tobias, he was a retired watchmaker who lived on Little Britain Street. I tried to put him in my third novel, Finding Mr Flood, but he didn’t quite fit.”

Ciara’s favourite character, and indeed mine, too, was Martha, the journalist, who is brash and prickly, but with a vulnerable side.

“She was born from an idea. I have a friend whose twin died when she was four. She doesn’t remember her sister, but obviously her mother grieves for her.

“I wondered how that would manifest on you and your family.”

Martha’s friend Tara is afraid to come out as a lesbian.

She’s fallen in love, and her reticence has put the relationship in danger. And Roman, newly arrived in Ireland was doing well, until he gets forced to a life of crime by the drug dealer, Jimmy.

I loved the teenager’s story.

In showing the inevitability of his descent from promise to prison, Ciara makes the reader aware of the reality of many juveniles, whose backgrounds aren’t the best.

“What really interests me is what makes people do the things they do; that and human interaction. I only write what I am interested in; I think you have to be passionate to make it work.”

Having four main characters, a few more minor ones, and a load of different plot lines presents its problems.

“I was very nervous about this novel,” she says.

“I always feel that way, but I was even more unsure with this one. It was bigger, and there were so many strands. It was like holding all these watermelons and struggling up a hill.

“I always remember a tip from Gerard Donovan whose workshop I went to back in 2007. He said you should walk your way through a novel. I had all these flashcards and I spread them around the floor in the attic where I work.

“I divided them into four for the characters, and did timelines and different events and literally walked from one to another to see how it could connect. It was technically hard.

“I was very nervous when it was finished. I said to a friend, I was worried I wouldn’t be able to find a bit to read at the launch because it was all rubbish. I always feel a bit like that.

“As writers, we might have massive egos but we have low self-esteem.

“We’re always second guessing. You are never finished, even when you are. At the launch I was editing as I read.”

Early response to the novel has been enthusiastic.

“I’m delighted. People really like it and have been moved by it.”

As we talk about the end of the book — and about the love stories at its core, I tell Ciara that the ending made me cry.

And, to my horror, I have to reach for a tissue to wipe away fresh tears.

“You really are crying. That’s adorable!” she says.

“I love the last bit too. I wrote it in one sitting.”

Formerly working in insurance, Ciara has written full-time since she gained her second two-book deal.

Researching her books in the summer, she generally starts writing in September, when her children, now aged 17, 15 and 8, are back at school — though sometimes she starts in the holidays.

“That’s always tricky. I write in the attic and when I go down there are cereal bowls everywhere.”

In term time, she gets to her attic office at 9.30 — and on a good day, is writing an hour later. And though writing can become frustrating, Ciara is aware that she is lucky to have the luxury to write fulltime.

She is about to start on the next book.

“I have a great idea for it. I’m really excited,” she says.

“But writing doesn’t get any easier. It’s a really good day if I produce 1,000 words. Some days it is literally word after word, like pulling teeth. You are shouting at the walls.”

Published in The Irish Examiner, on July 9th.